President Donald J Trump is done playing games with these chumps. He’s calling them out on their partisan bull***t. And it may surprise you to see just who’s joined him!

NBC’s Peter Alexander was setting up a heads-I-win-tails-you-lose question that would leave Trump open to criticism no matter HOW he answered it.

In a situation where the nation (and the markets, both domestically and around the world) are walking the razor’s edge each day… never quite sure to feel panic or optimism, the President has made a consistent effort to do two things.

Nobody can possibly claim they are being kept in the dark. In a situation where ignorance leads to rumors and panic behavior, this is an important step.

2) Address the public directly himself, speaking in reassuring and encouraging tones about the sort of people who are directing solutions, what sort of steps have been taken with those who can help us solve it, and more generally, why we should have reasons to believe that however hard we get slammed during this crisis, the record-setting strong fundamentals that were in place only a couple of months ago are still sound when the wheels of the economy start turning again.

It’s literally his JOB to be the calming voice of reason.

But that didn’t stop NBC from beclowning themselves… and Trump verbally smacking the arrogant little schmuck right back into his seat.

You repeatedly were as negative and nasty as possible right before your question as you were suggesting that the administration was misrepresenting positive news to give people a "false sense of hope"pic.twitter.com/d0fsbTt2FL https://t.co/K6xTGL7eXR

Despite asking an obviously leading question, Peter Alexander played the innocent victim of an undeserved thorough bitchslapping from the President.

What narrative was he pushing?

The same one all his OTHER political rivals have been pushing — here’s CNN.

They need to maximize how bad this crisis is so that they can lay it at Trump’s feet in November as some kind of a failure of leadership.

And the President called him out for sensationalizing the crisis.

Everyone is deliberately leaving out the part after President Trump called Peter Alexander a “terrible reporter” in which he said “The American people are looking for answers and they're looking for hope and you're doing sensationalism…"pic.twitter.com/emF7oKoJdW

Was anyone buying it?

NeverTrumpkins were fine with it, but not even Brit Hume gave the reporter the benefit of the doubt. 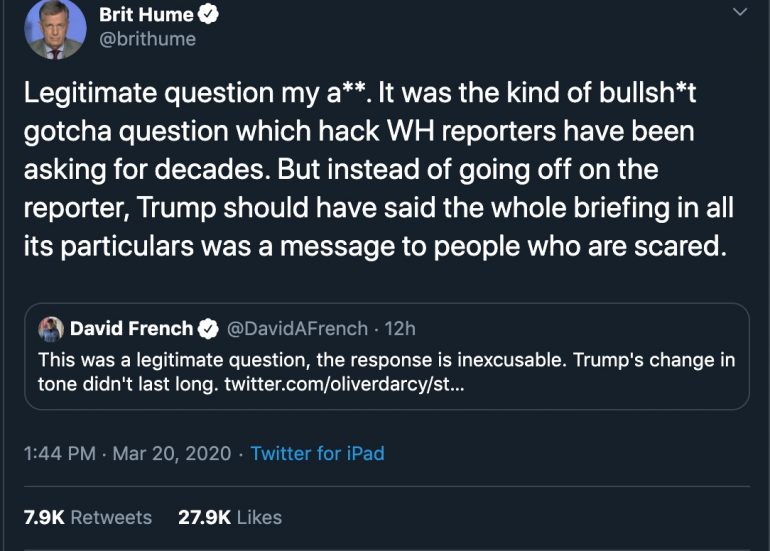 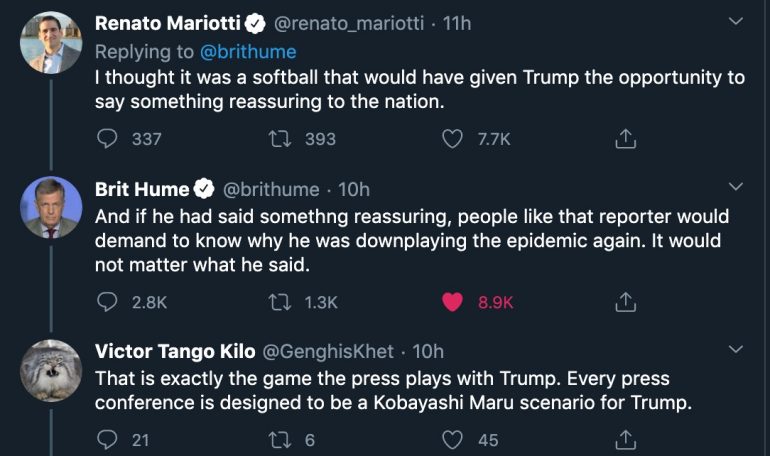 Here’s another take. This one from Ari Fleischer… who tends to call balls and strikes.

This clip is deceptively edited. The blow up was the result of a reporter challenging Trump's statement that he was hopeful about the efficacy of a new drug. That's what launched this. The public would know more if the media showed the full clip. https://t.co/uy8xG2Qizr