Prime Minister Justin Trudeau used a strange phrase in one of his daily coronavirus press briefings.

It appears that Canada has its own version of coronavirus press briefings. But they are a little different than the ones in the U.S.

Because Prime Minister Justin Trudeau’s wife had tested positive for the novel coronavirus, he had self-quarantined out of an “abundance of caution” on March 12. This means that he is not present when Health experts answer questions about the coronavirus and present information to Canadians. Instead, he stands in front of the cottage where he has currently been in self-quarantine for 29 days and speaks to the media.

On Wednesday, Prime Minister Trudeau was attempting to clear up the mixed messages that Canadians are getting from the government regarding wearing masks in public. He said that wearing a mask protects others rather than protecting oneself. In the middle of his explanation, he said that a mask prevents you from breathing or “speaking moistly” on someone. Realizing his phrasing, he followed that by saying, “what a terrible image.”

The moment all of Canada cringed! ? “Speaking moistly” #C100Mornings pic.twitter.com/tUTmE0NDCf

One ambitious Canuck decided to turn it into a song.

Canadian journalists have started sharing the song and it is currently trending on Twitter in Canada. 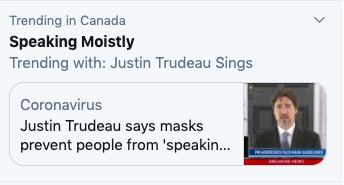 Everyone has a verbal gaffe now and then, but not everyone has such a spectacular gaffe that it gets made into a song.

It looks like Canada is being run by a hybrid of Barack Obama and Joe Biden. Trudeau is a woke, gaffe-prone, progressive globalist. That explains so much, doesn’t it?