For Germany, this issue got personal. There’s an itemized bill and everything.

This is how a Free Press is SUPPOSED to hold people to account. While the usual suspects in the MSM were scolding Americans for calling this virus from Wuhan ‘Chinese’ (despite China calling it the Wuhan Virus), the German press got out their ticker-tape and started calculating economic damages unleashed by this pandemic.

There are probably some hidden costs that weren’t accounted for in the list, but they came up with a figure that converts to something like $162 Billion US.

In damages. From one country.

If that snowballs, China could be in for a world of hurt.

No wonder China is so keen on saving face here. But there is clear evidence of guilt, in the fact that they ‘disappeared’ informants, destroyed medical and research evidence, amassed and hoarded PPE while telling the world there was no threat, refused to allow WHO officials into Wuhan, closed Chinese travel to Wuhan while allowing international travel into and out of Wuhan.

Much like Chernobyl, these guys KNEW they were hiding something big. The only unknown here is the extent of that knowledge and concealment.

Germany has sparked outrage in China after a major newspaper put together a £130bn invoice that Beijing “owes” Berlin following the impact of the coronavirus pandemic. Germany has followed France, the UK and the US in directing its coronavirus anger at China, where the virus originated. Recent attacks come amid findings that Beijing appeared to cover up the true scale of the crisis, as the source of the outbreak remains a mystery.

On Saturday, Donald Trump warned that China should face consequences if it was “knowingly responsible” for unleashing the coronavirus pandemic.

President Trump told reporters: “It could have been stopped in China before it started and it wasn’t, and the whole world is suffering because of it.

“If it was a mistake, a mistake is a mistake. But if they were knowingly responsible, then there should be consequences.

He said the Chinese were “embarrassed” and the question was whether what happened with the coronavirus was “a mistake that got out of control, or was it done deliberately?” —Express

If the world were to bill them for damages, that would go a long way to canceling much of the debt China holds internationally.

The next step will be for countries to start disentangling themselves from reliance on Chinese control from which they profit massively, and by which they hold a gun to the heads of nations that won’t do their bidding.

Look at what happened to Canada, for instance. 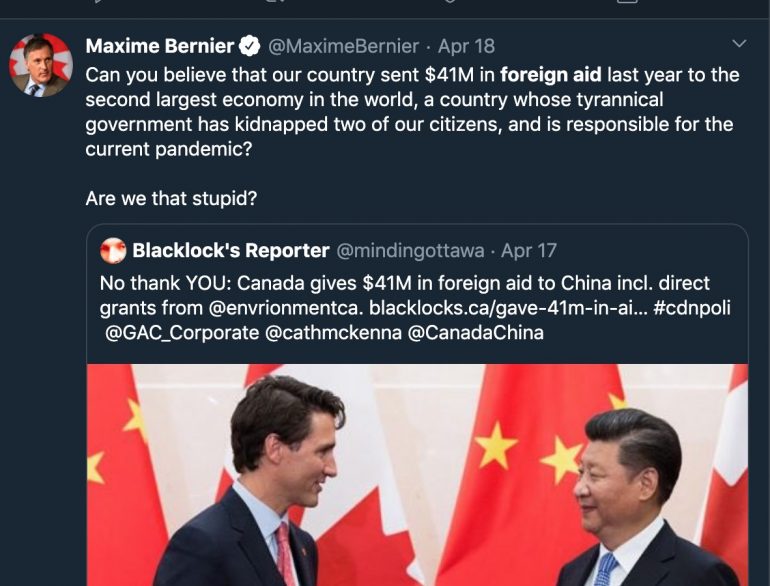 China is STILL holding some Canadian political prisoners, throwing their political weight around in Canada, pressuring them to adopt Huawei 5G (which is a big deal to the US since Canada is a member of the Five Eyes network, which could give China a backdoor into sensitive classified information in all 5 countries). And Canada is STILL sending China ‘foreign aid’.

Break free of the addiction to China.