A certain Silicon Vally Titan has been playing a role in politicizing both the outbreak and the response to it.

Pages organizing a protest on FB have been going dark. Pages giving the ‘wrong’ information about Chinese Coronavirus are fact-checked and redirected to WHO. Yes, we’ll be redirected to the same group that helped China deny, deny, deny. That gaslit other nations for ‘xenophobia’, advised us not to wear masks, downplayed both the severity AND the human-to-human transmissibility. We’re redirected to THEM for reliable information. Let that thought sink in for a minute.

Unless government prohibits the event during this time, we allow it to be organized on Facebook. For this same reason, events that defy government’s guidance on social distancing aren’t allowed on Facebook,’ a spokesperson said on the social network’s policy in the midst of the coronavirus pandemic.

Facebook officials said they reached out to states individually to understand their lockdown orders then removed posts that violated those rules.

‘We reached out to state officials to understand the scope of their orders, not about removing specific protests on Facebook. We remove the posts when gatherings do not follow the health parameters established by the government and are therefore unlawful,’ a company spokesperson said to DailyMail.com. — DailyMail

If you follow that logic, free speech is granted to anyone and everyone who agrees with one or another official government policy.

Why is @Facebook colluding with state governments to quash peoples free speech?

Regardless of what you think about the lockdowns or the protests against them, this is a chilling & disturbing government directed shutdown of peoples 1st Amendment rights. Very dangerous! https://t.co/rnG09TSVhI

What could possibly go wrong?

Facebook took down posts for protest events in California, New York and Nebraska. The company said that the posts were removed because the demonstrations in those states would violate orders intended to limit the spread of the virus. Several other events have not been taken down.

“Because free speech is now illegal America?” Hawley tweeted in response to a tweet that claimed the posts had been taken down “on the instruction” of state governments. —Newsweek

One observant reader pointed out a significant flaw in the Newsweek story/ Facebook response: 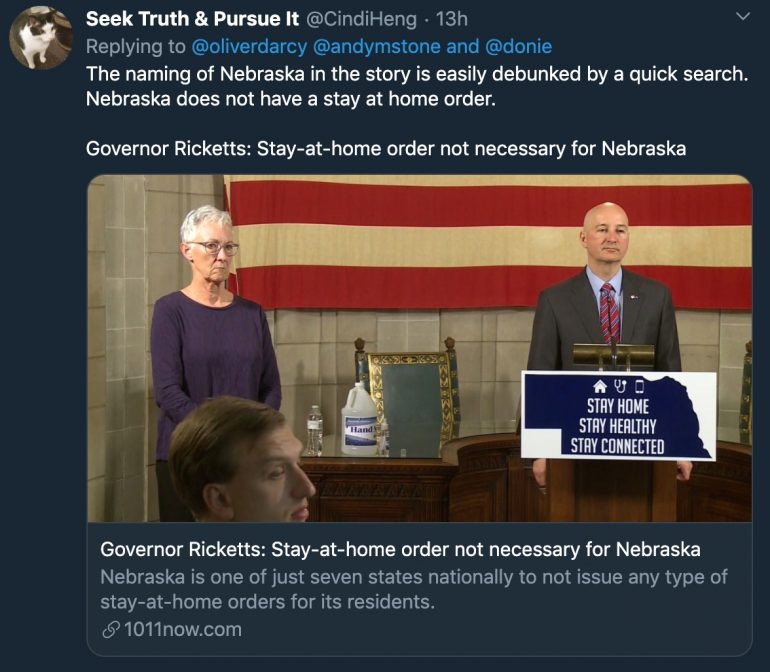