News of Kim Jong Un’s demise may have been greatly exaggerated.

Late on Monday night, CNN broke the story that North Korean dictator, Kim Jong Un was near death after undergoing heart surgery due to “excessive smoking, obesity, and overwork” according to an online South Korean news agency that focuses on North Korean news.

The US is monitoring intelligence that suggests North Korea’s leader, Kim Jong Un, is in grave danger after undergoing a previous surgery, according to a US official with direct knowledge.

A second source familiar with the intelligence told CNN that the US has been closely monitoring reports on Kim’s health.

Kim recently missed the celebration of his grandfather’s birthday on April 15, which raised speculation about his well-being. He had been seen four days before that at a government meeting.

…”There have been a number of recent rumors about Kim’s health (smoking, heart, and brain). If Kim is hospitalized, it would explain why he wasn’t present on the important April 15th celebrations,” said Bruce Klingner, a senior research fellow at the Heritage Foundation and former CIA deputy division chief for North Korea. “But, over the years, there have been a number of false health rumors about Kim Jong-un or his father. We’ll have to wait and see.”
Source: CNN

CNN broke the news on Chris Cuomo’s show via the chyron. But it wasn’t until Don Lemon’s show that it was mentioned by an on-air personality and featured one of the reporters of the story–Jim Scuitto.

The US is monitoring intelligence that North Korean leader Kim Jong Un is in grave danger after surgery, according to a US official https://t.co/SzOkC6r8gH pic.twitter.com/rffYNzYnOX

Other news agencies jumped on the CNN report. 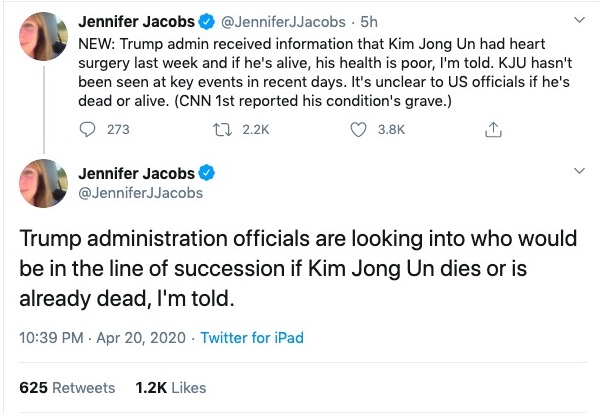 But it seems that the report was a bit premature.

According to a Canadian newspaper, The Globe and Mail, the report is wrong.

Kim was receiving treatment after undergoing the procedure, a South Korean media report said late on Monday, amid speculation over Kim’s health following his absence from a key anniversary event this month.

The reports about Kim’s health are not true, two South Korean government sources said. The presidential Blue House said there are no unusual signs coming from the North.

Daily NK, a Seoul-based speciality website, cited unidentified sources inside the isolated state saying Kim is recovering at a villa in the Mount Kumgang resort county of Hyangsan on the east coast after undergoing the cardiovascular procedure at a hospital on April 12.

CNN reported that Kim was in “grave danger”.

An authoritative U.S. source familiar with internal U.S. government reporting on North Korea questioned the CNN report that Kim is seriously ill, even though he has been out of the public eye for an extended period.

I’ve deleted that last tweet out of an abundance of caution. Waiting on more info. Apologies.

Can you imagine the outrage if Fox News made such a phenomenally huge mistake?

So much for “Facts First.”

I can’t wait to see how CNN’s Media Watchdog, Brian Stelter, covers this in his newsletter once he’s finished crying into his huge pillow.