If they didn’t have double standards, these people would have no standards at all.

I’ve never been to the Hamptons, but it must be a spectacular place to lure not one but two journalists that have tested positive for the Wuhan coronavirus out of quarantine to walk around mask-free. Truly, the Hamptons must be a magical place.

CNN’s Chris Cuomo has made his battle with the coronavirus from his basement in Long Island an ongoing news story. He’s shared Xrays of his lungs on camera and had CNN’s medical expert, Dr. Sanjay Gupta, review the images. Dr. Gupta said that there was some respiratory infection. Radiologists on Twitter disagreed saying that the Xray was normal.

Chris, your chest X-ray is normal.
This from a Radiologist who sees 1000’s of chest X-rays every year

But Fredo insists that it’s been a hardship for him to endure quarantine away from his family locked in the basement for 14 days.

Last night, he had the big moment–the emergence from the basement.

Here's the very moment @ChrisCuomo emerged from his basement, where he's been riding out coronavirus for the last several weeks. pic.twitter.com/tugkXCGZD7

This is literally Fake News.

All good and well, except for one thing–Chris Cuomo was out and about on Easter Sunday in the Hamptons with two women and several children at a property that he owns. A 65-year-old bicyclist spotted him and asked why he was out of quarantine and not “social distancing.” Cuomo admitted to having a confrontation with a “jackass, loser, fat-tire biker” but claims that it was while he was in his own backyard wearing a mask.

Meanwhile, Clinton hack turned ABC News anchor, George Stephanopoulos, has also tested positive for the coronavirus after his wife contracted it. Stephanopoulos was out walking around chatting on his cellphone. He had a mask, but it wasn’t covering his face, instead, it was hanging around his neck.

This time, The New York Post managed to snap a photo. 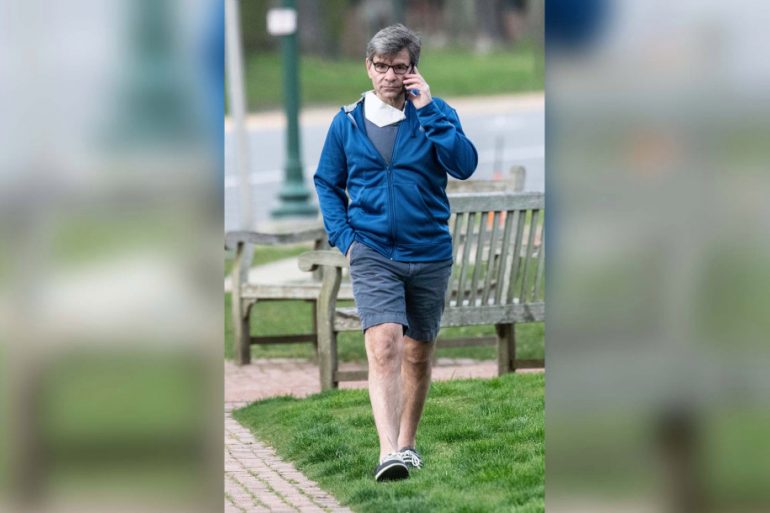 One outraged witness said Stephanopoulos — who announced he tested positive for the virus last week after his wife, Ali Wentworth, contracted it — was seen leaving his Hamptons home in a pair of shorts and walking for about a mile along East Hampton lanes, with his mask down the entire time.

The witness said, “For somebody who reports on the pandemic every day, and is broadcasting guidelines about safe social distancing, George didn’t really seem to care.

“He was on his own, walking through the lanes and past East Hampton Guild Hall, on his cellphone the whole time, yakking with his mask around his neck.

What a damned hypocrite!

Here’s Georgie-boy urging Facebook CEO, Mark Zuckerburg, to crack down on people who are organizing protests because they want to get back to work for “defying social distancing” orders.

This isn’t the first time that Stephanopoulos has flip-flopped on an issue–back in the Clinton days, he was the one vilifying women for the “bimbo eruption” accusations against Bill, but he is the lead news anchor at the station that killed the Jeffrey Epstein story and has said nada about it. Do you think George–the Bill Clinton handler–didn’t know what Bill’s buddy was up to? These were open secrets.

For all the cries of “if it saves one life” that these journos have made, they don’t seem to give a damned about anyone else. I guess that’s easy when you’re still collecting a big, fat paycheck and all the plebes are whining about their freedoms as well as their jobs being taken away.

These leftist journalists must think that jobs, just like freedom, are rights that they have and to hell with everyone else. Hey, I’m just reading their actions rather than taking them at their word, because quite frankly, their words mean zip at this point.

Do you think that there will be any consequence for them to pay? Not a chance.

Meanwhile, Bill de Blasio has set up a snitch line for reporting on neighbors for not social distancing, but these clowns can test positive for the virus and not a damned thing will happen to them.