Which cities in the US have the most coronavirus? The New York Times collected the reported deaths from the virus so far this year. I emphasize the word “reported”. Early in the year, the Wuhan flu might not have been recognized as the cause of death. Later, testing services were hard to get as the number of suspected patients rose rapidly. For political reasons, some hospitals might have classified all viral respiratory infections as the Coronavirus. What the numbers from the NY Times didn’t tell us was the fraction of us who died from the virus. I estimated that for you.

Some of the first victims of the Wuhan flu were people who were already seriously sick. They died with the virus, but the virus was simply the final cause that pushed them over the edge. For perspective, the flu kills some elderly people every year. In contrast, we also saw some people die who had no previously recognized illness. That made us think the Wuhan flu could be particularly dangerous.

That is why it is important to look at both the number of people who’ve had the Wuhan flu, and the number who died from it. I wondered if the virus was really as dangerous as the news reports described. About 1.3 million of us had the Wuhan flu, and about 22 thousand of us died with it. It implies that the flu was lethal about 1.7 percent of the time if you caught it. That sounds serious, but..

That infection rate is misleading because of the people who had the Wuhan flu but were never tested and therefore never recorded. We counted the patients who became seriously ill enough to require medical attention and were tested.  We don’t know how many people felt bad for an evening, were healthy the next day, and never bothered to see a doctor. We need to dig a little deeper to understand what is happening with this disease.

I looked at the areas that reported ten or more fatalities from the Wuhan flu this year and collected their populations. Of course we expect more people in our larger cities to catch this flu, but how many more is important. When we do that, we see that we have a very small chance of dying from this disease so far. Up until the first of April, the average cumulative death rate from the Wuhan flu is 34 deaths per million population, or 0.0034%. That rate is quite low. The ordinary flu is expected to kill 36 people per million over three months of the nine month flu season. That means the regular flu is about as dangerous as what we’ve seen from the Wuhan flu so far. So far, this disease is dangerous, but not frighteningly so. I thought that was the case, but now I have the numbers to show it.

I keep saying “so far” because we’re still learning about this disease. This virus isn’t in every population yet. We also don’t know how many people had the Wuhan flu and shrugged it off. Until we know, we’re staying home and washing our hands to limit the rate at which the virus spreads.

That does two things. First, these precautions slightly reduces the total number of us who will catch the Wuhan virus over time. That is good, but the second effect is to slow down the spread of the disease and significantly reduce the number of us who have it at any one time. That helps our doctors keep up with the disease and treat those who are seriously ill. That saves lives.

The situation with this disease is changing quickly. Last week we didn’t have a simple and quick test to determine if you’ve had this flu and are now immune to it. Those tests came out this week. I suspect we’ll have a vaccine in a few months.

In the meantime, wash your hands.

Sources- Illness and deaths as collected by the New York Times and shared vie github.com “https://github.com/nytimes/covid-19-data/blob/master/us-counties.csv
5-digit location code from the Federal Information Processing Standard, State and County designation.
Populations for each location taken from the 2019 estimates by the US Census Bureau. 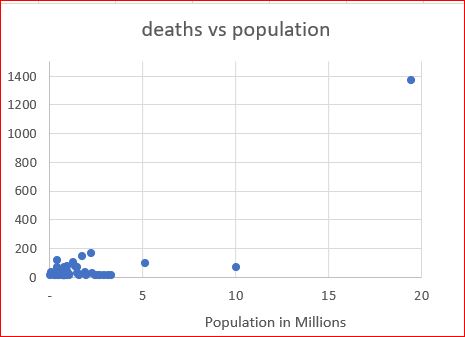