The letter opens, “Thank you for your Democrat public relations letter and incorrect soundbites, which are wrong in every way.”

Senate Minority Leader Chuck Schumer(D-NY) has been focused on his opposition to President Trump since Inauguration Day 2017. “Cryin’ Chuck” has opposed, ranted, raved, and worked very hard to make President Trump look bad at every turn. All of this despite having known the President for years and happily taking campaign donations from him in the past. How things changed when Trump put an “R” after his name.

Senator Schumer, who seemed to be constantly in front of a camera for the past three years, and especially during the impeachment, is back on CNN blasting the President for his handling of the coronavirus pandemic.

Here is Senator Schumer speaking with CNN’s Brooke Baldwin speaking about a letter that he wrote to the President insisting that a member of the military be placed in charge of implementing the Defense Production Act.

Sen. Chuck Schumer is calling on President Trump to appoint a military general, a "czar" to be in charge of medical supply production and distribution. He says Peter Navarro, the White House official who will lead Defense Production Act efforts, "is not up to the job." pic.twitter.com/NsCh7DglOh

Senator Schumer posted a copy of his letter to the President on social media.

You need to designate a senior military officer as "czar" with broad and government-wide authority to lead both production and distribution of desperately needed medical equipment NOW. pic.twitter.com/h92q37OZrM 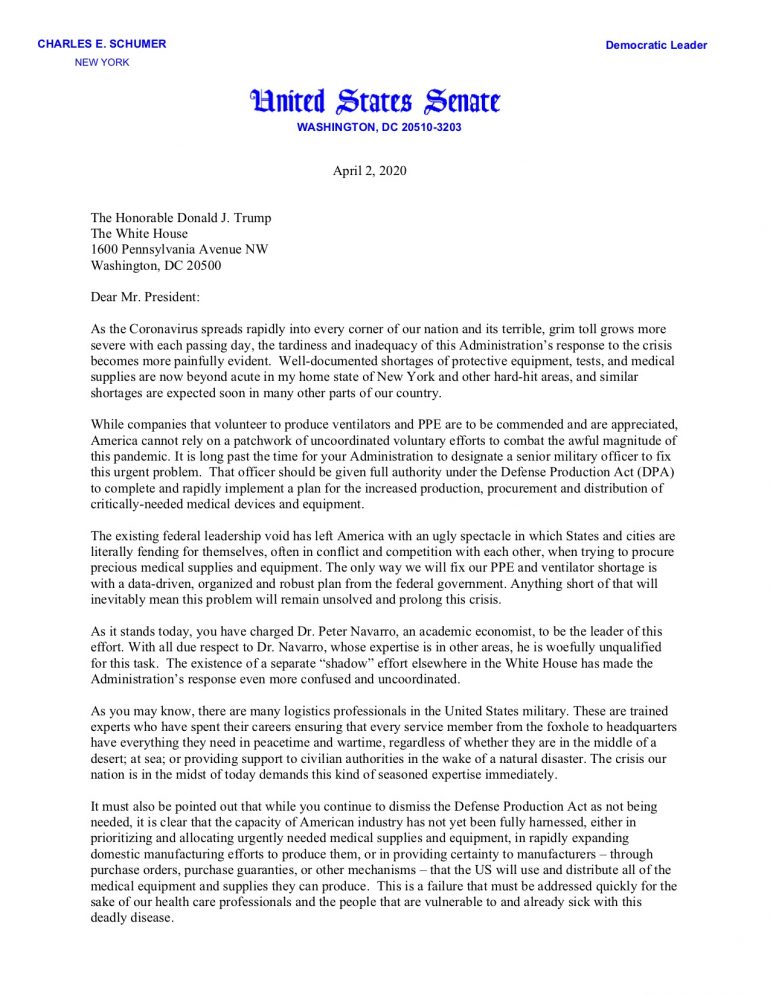 In his letter dated April 2, Senator Schumer wrote, “It is long past the time for your Administration to designate a senior military officer to fix this urgent problem. That officer should be given full authority under the Defense Production Act(DPA) to complete and rapidly implement a plan for the increased production, procurement and distribution of the critically-needed medical devices and equipment.”

Rear Admiral John Polowczyk was appointed to do this very job on March 22 through FEMA.

President @realDonaldTrump calls out Chuck Schumer: “we have one of the most highly respected people in the military…he's in charge, but Chuck didn't know that"https://t.co/M95uL6I4NB pic.twitter.com/GzGxdVPj7x

President Trump sent a letter in response to the Senate Majority Leader. It was quite a letter.

Here is the full text:

Thank you for your Democrat public relations letter and incorrect sound bites, which are wrong in every way.

If you spent less time on your ridiculous impeachment hoax, which went haplessly on forever and ended up going nowhere (except increasing my poll numbers), and instead focused on helping the people of New York, then New York would not have been so completely unprepared for the “invisible enemy.” No wonder AOC and others are thinking about running against you in the primary. If they did, they would likely win.

Fortunately, we have been working with your state and city governments, Governor Andrew Cuomo and Mayor Bill DeBlasio, to get the job done. You have been missing in action, except when it comes to the “press.” While you have stated that you don’t like Andrew Cuomo, you ought to start working alongside him for the good of New Yorkers.

I’ve known you for many years, but I never knew how bad a Senator you are for the state of New York, until I became President.

If you have any questions, please do not hesitate to call. Or, in the alternative, call Rear Admiral Poloqczyk. 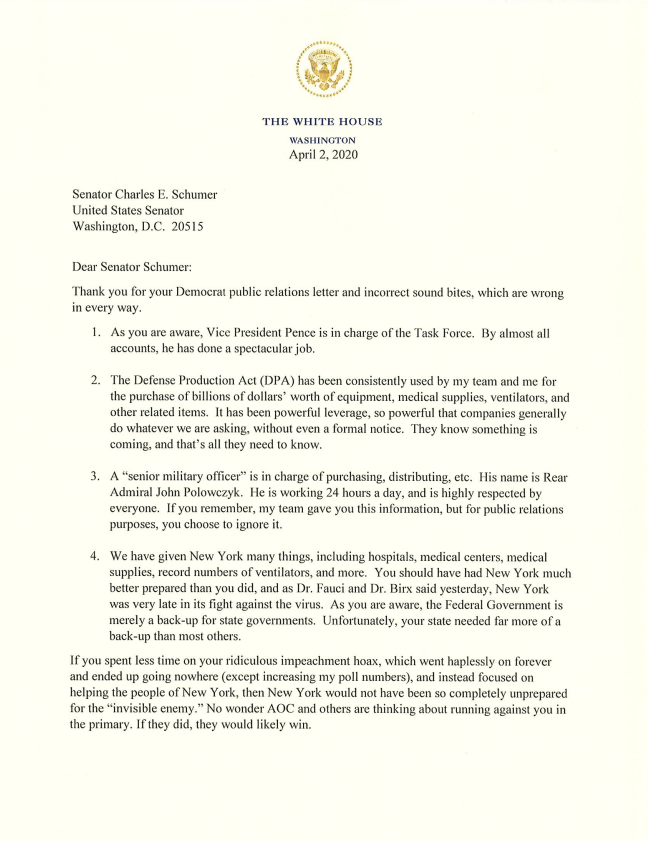 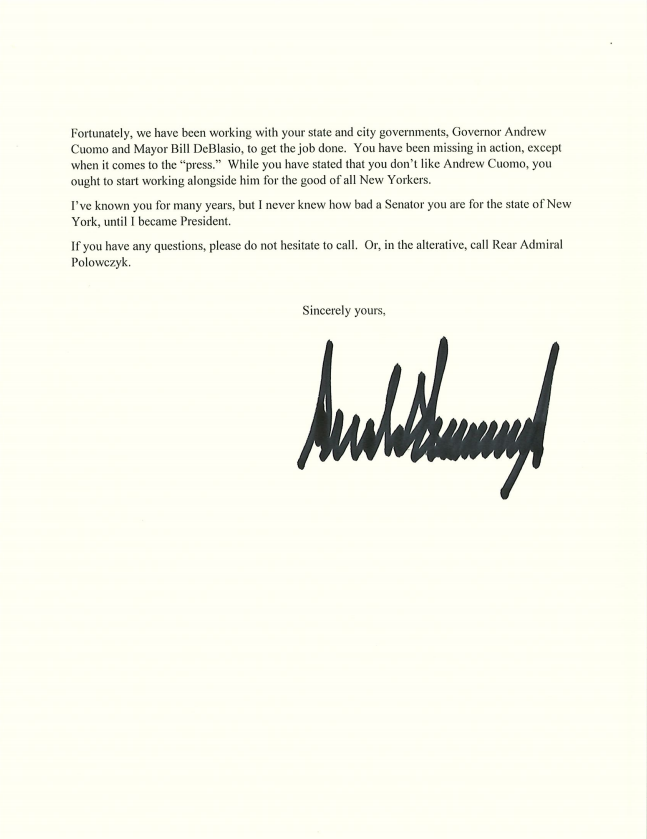 Senator Schumer responded to the response and said that he was “appalled” and he wants the President to “stop the pettiness.” 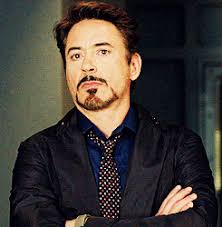 Besides, I’m pretty sure that any goodwill that had existed between the Senator and President Trump was torched by the constant “resistance” displayed by Schumer and the near-constant shrieking that every border-control policy is motivated by racism.

Democrats have shamelessly used this pandemic to push their progressive agenda, and Senator Schumer is no different. He says that “Phase 4” of the coronavirus bill should focus on “green infrastructure.”

Joining a chorus of Democrats, @SenSchumer is calling for a “phase 4” Coronavirus bill, this one focusing on “green infrastructure” pic.twitter.com/JJdW7zLv2j

Perhaps if Senator Schumer spent a little more time with what is actually being done rather than pushing progressivism, he wouldn’t have to face the pettiness.