The same folks who regularly double down on bogus stories critical of the right go into full damage control mode when they realized they’ve hurt someone they agree with.

In case anyone out there still wonders why so many Americans would sooner trust a ‘gently-used’ face mask from Wuhan than the ‘reputable’ news media… here’s another clue.

For the backpedaling in this story to properly make sense, we’ll need a proper background and context of what went before.

Governor Northam dodged a bullet about this time last year over two scandals. (Yes, there were TWO.)

The one people still remember is the ‘blackface’ and/or ‘KKK robes’ yearbook scandal. We’re still not sure which of the two in that photo was Governor Northam. We DO know that he has — at minimum — admitted to wearing blackface on occasion.

If there were an (R) after his name, that would be enough to send his career to the dumpster. But not so for Northam. Because THIS was actually the ‘look, squirrel’ story that conveniently dropped to make us forget the more serious scandal that was generating a lot of conversation about Northam, infanticide, and Big-Dollar donations from the Left’s beloved Planned Parenthood.

They managed to get people talking about blackface instead of infanticide. And then the same media that made such a big deal over inside jokes in Kavanaugh’s high school yearbook in the 1980s conveniently made the outrage against the Northam’s College yearbook overt racism go away.

That is the backdrop against which we measure today’s story.

Here is the tweet that got the ball rolling: 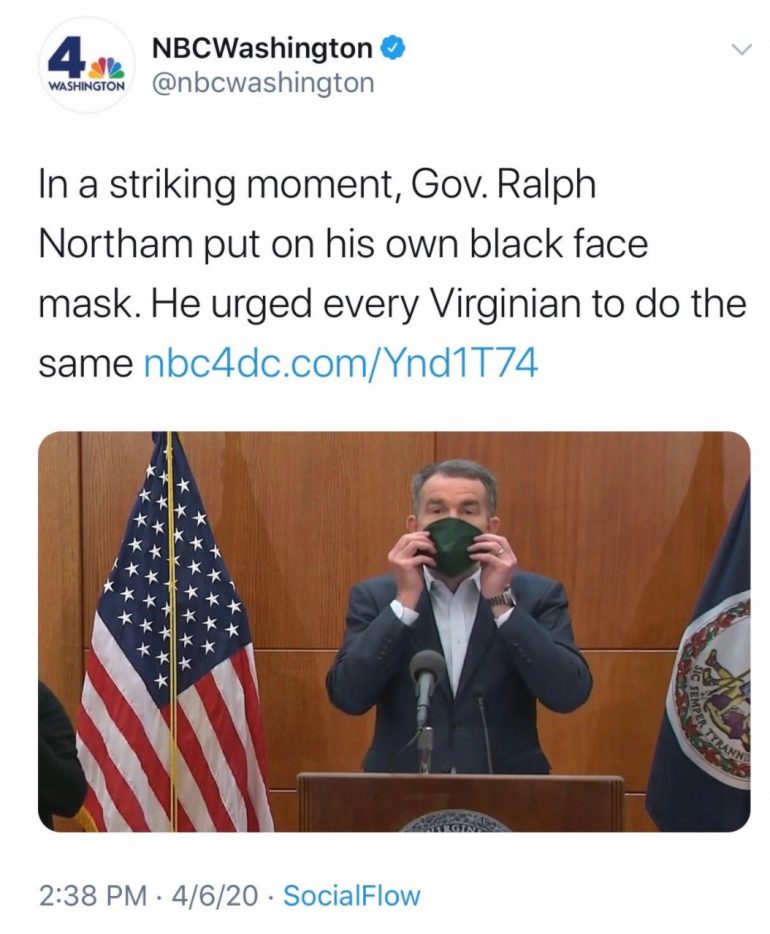 No, it wasn’t lewd. The choice of words was embarrassing for other reasons.

…put on his own black face mask…

Whoops! Didn’t mean to reopen THAT can of worms!

They went ahead and fixed it.

“I would advise everyone to wear a face covering when they are out, “ says @GovernorVA as he shows his mask made by at a correctional facility. He says social distancing compliance was much better over the weekend. pic.twitter.com/EWYPZEYzsa

Complete with an official retraction…

Correction: We made a misjudgment in a tweet about Gov. Northam’s face mask. We sincerely apologize for the error.

I’m sure they are very careful to give Republicans such deference when they report something that’s needlessly damaging to them, too — right?

Or are they just behaving like the AV department of the Democratic party like so many other ‘news’ outlets do?