A year ago, would anyone have even IMAGINED a peaceful protest in America being dispersed by the government… on the government’s own say-so?

Raleigh police told protesters who were lawfully petitioning their government for redress — by demanding the right to return to work — were told to go home.

Because their activity was deemed ‘non-essential’.

That’s real easy to say if you’re a government employee who still has a job to show up to when this is all over, isn’t it? But what about everyone ELSE?

What about industries that are teetering on bankruptcy and face an uncertain future even IF they get massive government bailouts?

Go home. You’re supposed to ‘shelter in place’. Your government doesn’t want to hear from you.

Did anyone ASK (or care) whether the government WANTED to hear from the people?

Don’t the PEOPLE have a RIGHT to petition their government, especially when actions of their own (representative government!) are causing them personal injury?

To hear the police tell the story, the answer is simply… no.

Such freedoms have been suspended because… well, apparently, because they are too dangerous.

On what authority have they been suspended?

Shhh! You must not ask such questions, comrade!

The police department is facing scrutiny after arresting protesters in downtown Raleigh on Tuesday, asserting that such activity is in violation of the governor’s executive order limiting outdoor activities amid the coronavirus pandemic.

“What part of the governor’s order was violated here?” one social media user asked.

“Protesting is a non-essential activity,” the police department responded.

According to local media, protesters called for the reopening of businesses, holding signs that said “Reopen NC,” “Freedom is not free,” and “#ReopenNC #Tyranny.” — Washington Examiner

We are reopening Wilmington and Jones Street. The protest has been cleared. There was one arrest made. #Raleigh #ReopenNC pic.twitter.com/DnQbFZusJy

“Protesting Is A Non-Essential Activity”, is it?

We’re not sure the Founding Fathers would have agreed with that sentiment. Or MLK, for that matter. 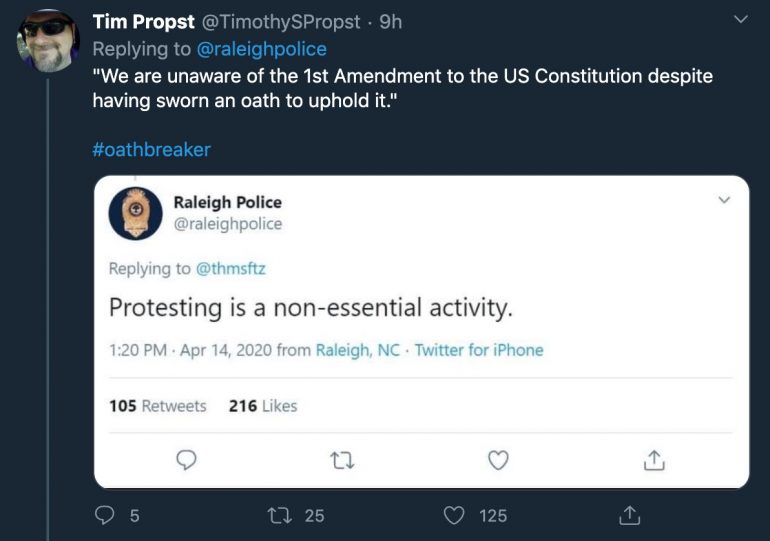 Don’t worry. They threw in a CYA statement, too.

Don’t look at us, it was the State that did the arresting.

Yeah? And who dispersed the protesters with the implication that other arrests would follow?

Their excuses didn’t hold much water:

An official statement was released: 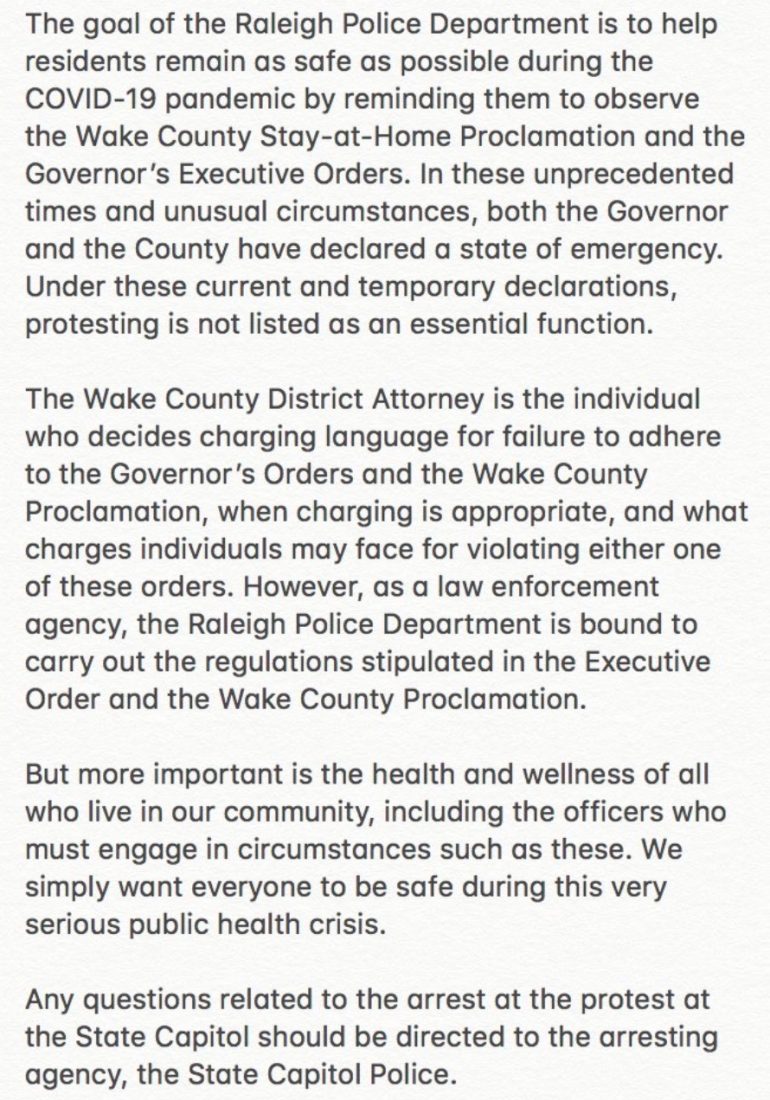 That got panned, too.

I find it interesting that in this long winded bullshit of a statement trying to hide behind "orders" not once did you address your violating the constitution, or your oath of office. All you managed to say was "we're just following orders". You know who else said that? #ReopenNC https://t.co/YNv8mkpdRG pic.twitter.com/jS4KMUr1wL

The ‘Too-Long-didn’t-read’ version of the official statement goes like this:

The Governor’s Executive Order declared a state of emergency and a stay-at-home proclamation.

Don’t bother us with your questions. Send them to the Wake County DA and the State Capitol Police.

Tell that to the people who are out of work and desperate while being explicitly ignored by a government that still has a guaranteed paycheck… paid for by the very people they are sending home.