In his Twitter post announcing that he has tested negative, he wrote, “Together we will overcome this!”

Senator Rand Paul(R-KY) shared the good news that he tested negative for coronavirus and that he has started volunteering at a local hospital. In the accompanying photo, Senator Paul was sporting a beard and wearing medical scrubs with an ID badge for TriStar Greenview Regional Hospital in Bowling Green, Kentucky.

Senator Paul tested positive for COVID-19 on March 22. He was the third member of Congress and the first Senator to test positive and was criticized by many for continuing to work out in the Senate gym while waiting for his test results. At the time, he defended himself by saying that he was not suffering from any symptoms and it was “highly unlikely” that he had come into contact with anyone who had tested positive for COVID-19.

Senator Paul had attended a fundraiser on March 7 with two individuals who had tested positive for coronavirus, but he said that he had no contact with either of them.

“For those who want to criticize me for lack of quarantine, realize that if the rules on testing had been followed to a tee, I would never have been tested and would still be walking around the halls of the Capitol. The current guidelines would not have called for me to get tested nor quarantined. It was my extra precaution, out of concern for my damaged lung, that led me to get tested,” the Kentucky Republican said in a statement Monday.

Paul, 57, had part of his lung removed in August after it was damaged when he was attacked by his neighbor in 2017. The attack left him with broken ribs.

When the test came back positive, Senator Paul said that clearly more testing needed to be done as he didn’t fit the CDC criteria for testing–showing symptoms or contact with someone with the virus.

“I believe we need more testing immediately, even among those without symptoms. The nature of COVID-19 put me — and us all — in a Catch-22 situation. I didn’t fit the criteria for testing or quarantine. I had no symptoms and no specific encounter with a COVID-19 positive person. I had, however, traveled extensively in the U.S. and was required to continue doing so to vote in the Senate. That, together with the fact that I have a compromised lung, led me to seek testing. Despite my positive test result, I remain asymptomatic for COVID-19,” Paul said. “The broader the testing and the less finger-pointing we have, the better.”

I appreciate all the best wishes I have received. I have been retested and I am negative. I have started volunteering at a local hospital to assist those in my community who are in need of medical help, including Coronavirus patients. Together we will overcome this! pic.twitter.com/9SeypT7rL6

Leftist Twitter went absolutely insane. (But then, what else is new?)

I'd rather die as John Prine than live as Rand Paul

Rand Paul announced today that he fully recovered from the coronavirus. He’s just dead inside. 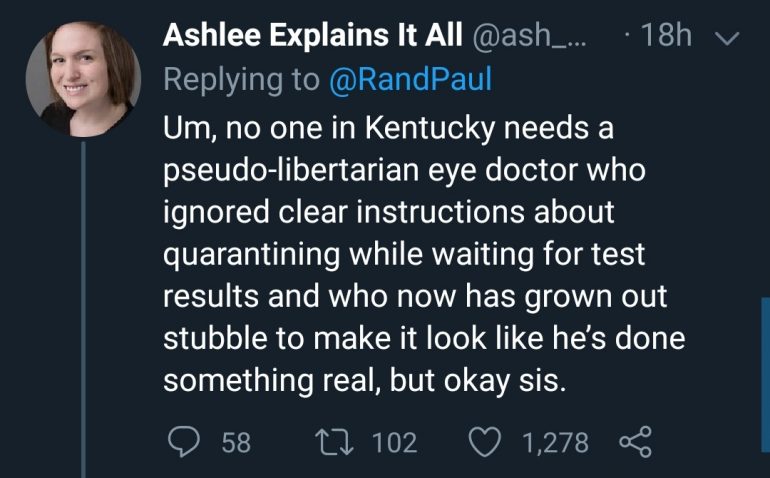 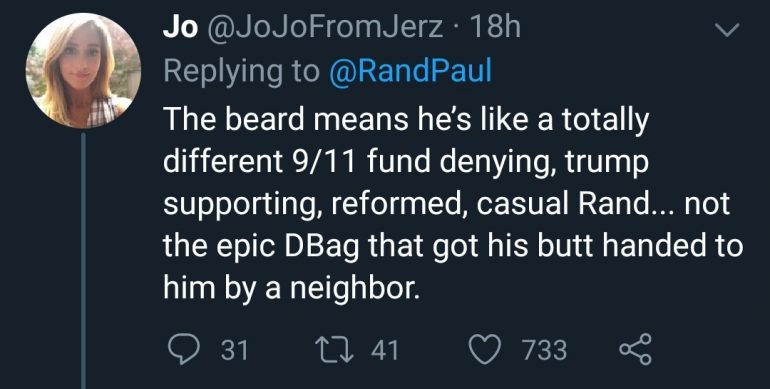 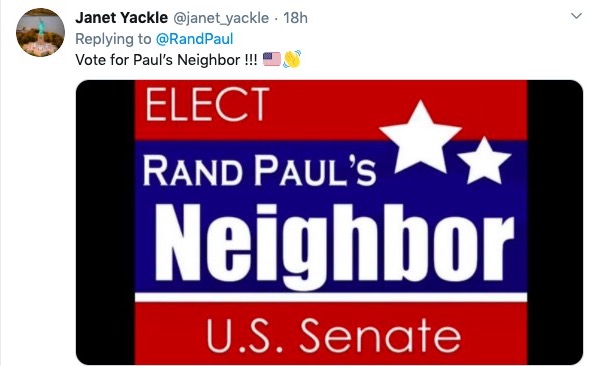 I'll bet he hasn't put in a full shift for a day. Lying piece of crap. He and his father! Elitist and self-serving human being. "Brave Senator Paul" is willing to fight to the last breath of everyone but himself. Puke! https://t.co/TdqDAKFzLI

But he’s also got quite a few people applauding him for recovering and going back to help.

Congratulations Dr. @RandPaul! We’re happy that you’re health has returned and are proud that you’ve returned as a volunteer at our local hospitals in Kentucky! https://t.co/SKTvAn2a1n

A great man and an example to follow. He’s had one hell of a rough year or so (almost murdered twice by the tolerant left) and surviving Coronavirus… and he still steps up to help his constituency and all Americans in need!!! Thank you @RandPaul https://t.co/DilPTyVovY

Almost shot by a Democrat activist at Congressional baseball practice

Almost murdered by his neighbor

Almost killed by the Chinese Virus

RT if you stand with @RandPaul!

@RandPaul is the politician I respect the most, even when I disagree with him. As a bonus, it is starting to look as if nothing can kill him. #coronavirus https://t.co/NblIKsFPNg

Good night to everyone except those people who are mad that @RandPaul survived a mass shooting, subdued a deranged attacker, and recovered from a global pandemic all in under 3 years.

Maybe it’s better to not be a ghoul who is upset that someone didn’t suffer and die during a pandemic.

Good luck getting the “tolerant left” to understand that.