This time, he’s not even getting dragged for something HE said, so much as something he retweeted.

A Conservative chica who took her shot in a run against Nancy Pelosi said something that caught the President’s eye, and got a retweet with a comment.

For those unfamiliar with here, here’s her Twitter bio: “I’m DeAnna Lorraine, Conservative Sicilian spitfire running against Nancy Pelosi for Congress. I will replace her soulless leadership with love, laws, & fierce patriotism.”

Here was the tweet at the heart of the current controversy:

Fauci is now saying that had Trump listened to the medical experts earlier he could’ve saved more lives.

Fauci was telling people on February 29th that there was nothing to worry about and it posed no threat to the US public at large.

The part that’s getting the attention is the hashtag at the bottom: #FireFauci

Here’s how WaPo is framing it (taken from a social media screengrab from someone I know on the Left): 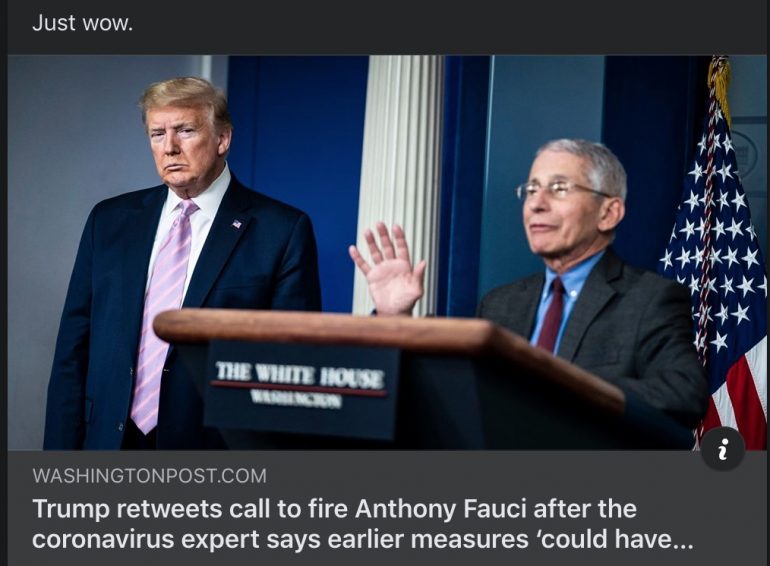 Trump came into the controversy with this retweet:

Sorry Fake News, it’s all on tape. I banned China long before people spoke up. Thank you @OANN https://t.co/d40JQkUZg5

It has a couple of parts. The #FireFauci hashtag is only ONE part of it. Is it the part he wanted to inject into the conversation? Or was his interest in some OTHER part of the tweet?

It is (at WORST) ambiguous as to whether he agrees with the controversial hashtag.

More plausibly, he’s defending himself against the ‘blood on his hands’ accusation that has been a preferred line of attack on the part of Democrats.

If only Trump had acted earlier, the claim goes.

What is the President saying in response?

‘Fake News’ — which is a more socially appropriate version of saying that the accusations against him are unfounded horses**t.

He is giving his reply — ‘fake news’ he was putting that marker down. In the second part of his answer, he explained why it was fake.

The claim — that Trump waited too long to heed the advice of medical experts — doesn’t square very well with what we know about the timeline — or even Fauci’s OWN role in the timeline.

Fauci: February 29. The problem is Trump DID listen to the “experts”

Now that she’s found herself in the firestorm, she’s doubled down on that controversial hashtag.

Both with her OWN tweets, and retweets of others.

Jan: Fauci told us it was no threat to Americans

Feb: Fauci told us to continue going to gyms, malls, and the movies

He’s been wrong every step of the way and is now blaming @realDonaldTrump for his failures. #FireFauci

Here's an email from Anthony Fauci to Cheryl Mills praising Hillary Clinton's "stamina and capability" during the Benghazi Hearings.

Also, notice how he claims she "hit out of the park" and makes sure to include that he "loves" her.

Forget all the questionable stuff about Fauci for a minute.

Why is he constantly on CNN & MSNBC when all they do is try to goad him into making anti-Trump statements?

That alone is suspect.

Pair that with everything else & its abundantly clear #FireFauci is the move.

The Liberals are bothered that Trump quote retweeted my #FireFauci tweet so they're now trying to get #FireTrump to be a thing.

Sorry, we're not firing the best President of all time.

He's not going anywhere in November either.

Four more years. Deal with it.

Suppose there is some reason practical, political, or otherwise — where Fauci needs to remain on — is there nothing preventing Trump from adding in some other experts with dissenting voices?