The most disingenuous thing that is happening with coronavirus reporting is that “journalists” behave as though only the United States is suffering casualties from the virus.

It’s interesting how she represents New York Magazine, but Cuomo will never face a question like this one. This, despite the fact that Cuomo’s Executive decisions were directly causal in an event chain resulting in this virus sweeping through New York nursing homes, and racking up a huge percentage of the body count this ‘reporter’ is laying at Trump’s feet.

Here was the question, and Trump’s reply:

Video: Truly pathetic end to today's Coronavirus Task Force briefing as NY Mag's Olivia Nuzzi wondered -> "If an American president loses more Americans over the course of six weeks than died in the entirety of the Vietnam war, does he deserve to be re-elected?" pic.twitter.com/bN6mn6b14n

“If an American president loses more Americans over the course of six weeks than died in the entirety of the Vietnam War, does he deserve to be re-elected?” Nuzzi asked.

Trump didn’t answer the question directly, instead choosing to highlight the steps his administration had taken to mitigate the spread of coronavirus.

It sounded like a ‘gotcha’ question to many observers. Here’s a defense of the question, in her own words:

If more than 50,000 Americans died over the course of a few weeks at any time in our history, it would be fair to ask the president if he deserves to be reelected. It wasn’t a gotcha question, it wasn’t designed to provoke, and I appreciate the fact that Trump took it seriously.

Quite a few things.

One, is there anything a President — ANY President — can do to keep a virus from spreading through a hyper-connected world, especially if there is a very long asymptomatic latency period, and the genie is already out of the bottle when we first learn about it? If the answer to that question is ‘no’ then this is a garbage question.

Two, is there any reason to connect this to Vietnam other than to score cheap political points? Will any other comparison be more helpful or effective at conveying a message? The obvious answer is that Vietnam, and specifically the death toll in Vietnam, was politically radioactive, creating a surge in negative public opinion. Connecting this issue to that seems more than a little bit politically opportunistic, especially when the conditions between a foreign war and a domestic disease outbreak have literally nothing in common with respect to government policy.

Some 58,000 Americans were KIA in Vietnam. In 2018, there were 80,000 people killed from influenza. Somehow that wasn’t a comparison worth drawing. It is also worth noting that the flu deaths per year may be much higher than stated. That is because not every death due to pneumonia etc that might be ultimately attributed to the flu has actually been tested for influenza. Such cases would go unreported.

Nobody suggested the deaths from the flu were a potential reelection problem. That’s because sickness had not yet become a political flavor of the month.

Would she be just as comfortable suggesting Trump was a superior president to Obama because of a different death statistic? Under Obama, yearly deaths to opioids doubled, to something like 47,000 a year. If you’re going to compare things to Vietnam fatalities, we’re in the same ballpark and then some. Trump enacted policies that — for the first time in decades — reversed that trend.

See how meaningless this game is?

You could also do per-capita comparisons with other countries. It’s easy to forget in racking up these bodycount totals that USA has grown to be the world’s third-most populous nation. Leftist have been crowing that USA is a sh*thole country with the highest infected and highest body count. Objectively that won’t be true if we ever get accurate numbers of China’s infection and death rates, which some have pegged at 50x higher than officially reported.

But it is wrong another way, too. American per-capita infection rates are not the highest in the world. And that’s even not accounting for how the USA has twice as many people tested as the next-closest country… meaning they could have many undiagnosed cases lurking out there. Three times that of many others. All things being equal, we stack up better than the gloom-and-doomers would hope (Chart is a screen-capped portion from RCP): 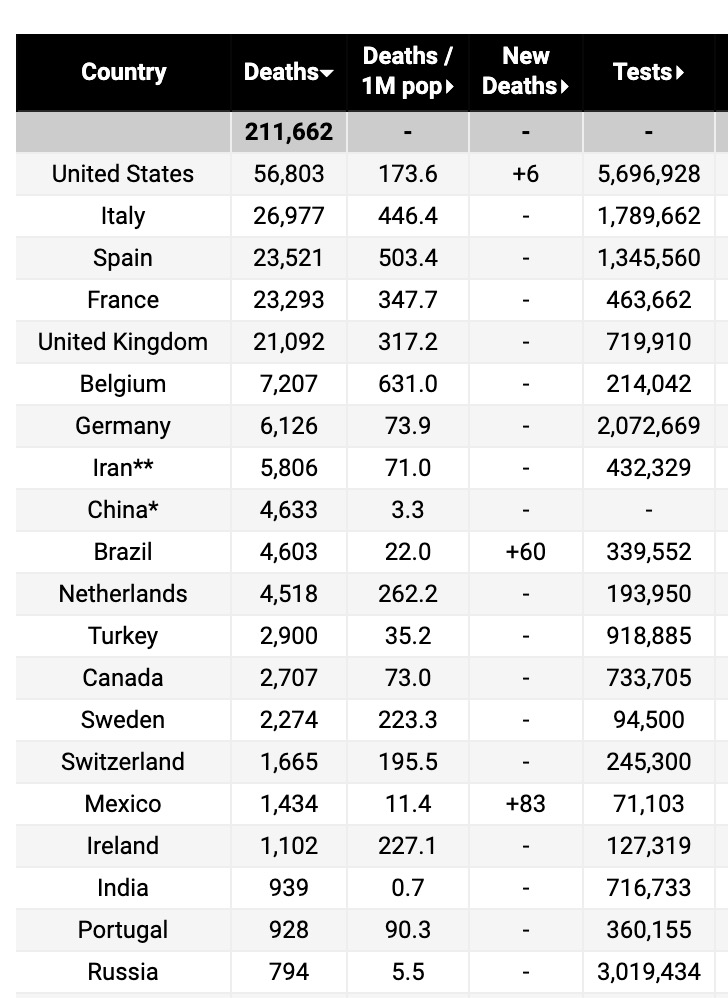 So far as the deaths per million stacks up, most of Europe is worse off than we are.

But as someone writing for a New-York based magazine, she missing something very obvious. Should the Governor of New York be re-elected? Unlike the President, Cuomo made decisions directly endangering (and costing) the lives of nursing home residents. The virus shot through those vulnerable populations like wildfire, filling body bags in its wake. Should CUOMO be facing clumsy questions about the body count and Vietnam?

Or is that just privilege reserved for Orange Man Bad?