President Trump and the presumptive Democratic nominee are in a war of words over mask use.

Joe Biden made his first public appearance on Memorial Day to lay a wreath at Delaware Memorial Bridge in Wilmington. Biden has not made any public appearance outside of his house in Delaware since the lockdown began in March. He made the trek with his wife, Jill, and several Secret Service members, all of whom were donning masks.

In the video, it’s clear that Biden is staying far away from everyone except for his wife and the Secret Service agents. Still, Biden wore a mask with his signature aviators despite being outside and following the “social distancing” guidelines that have been given by infectious disease experts.

Watch Joe lay the wreath while wearing a mask:

President Trump retweeted a tweet by Fox News reporter, Brit Hume who posted a photo of Biden in the mask along with the comment, “This might help explain why Trump doesn’t like to wear a mask in public. Biden today.” 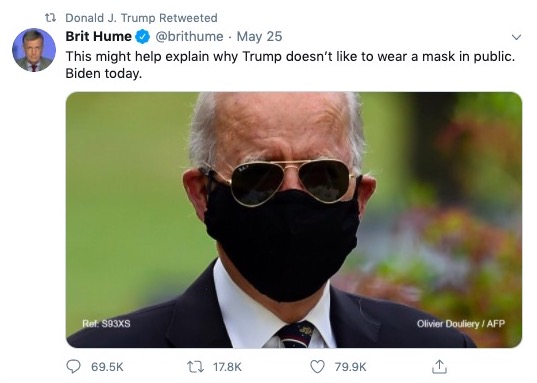 Yikes! That is not a good look.

On Tuesday, President Trump, who has repeatedly said that he will not wear a mask in public was asked what he thought about Joe’s mask-wearing considering the retweet of Hume. President Trump says that he thinks it’s kind of silly to wear a mask because Biden was outside and with his wife–where is he going to get the virus from, exactly?

A couple of things to note here…

Joe Biden, of course, was asked to respond to this.

In an extremely socially distanced interview that might have been closer had they been using Zoom while Biden was still in his basement, Biden called Trump a “fool” and incorrectly states that the proper social distance is 12 feet and not 6 feet as the current CDC guidelines state. Biden even notes that he and his interviewer are 12 feet apart. He says that Trump refusing to wear a mask in public is just “macho stuff” but doesn’t actually address the point that Trump made–Biden was with his wife, outdoors, and not in a crowd.

Joe Biden called President Trump an ‘absolute fool’ for mocking the former Vice President’s mask-wearing appearance when he wore a mask in public on Memorial Day.

‘He’s a fool. An absolute fool to talk that way,’ Biden said Tuesday in his first sit-down interview since the coronavirus pandemic hit in full force.

Biden, who wore a black mask and sunglasses Monday as he paid respects at a veterans cemetery along with his wife, Jill, accused Trump of engaging in ‘macho stuff’ and compared him to a high schooler who posed as a tough athlete.

Really? Everyone in the media apparently forgot that Biden said that if they were in high school, he’d “take him behind the gym and beat the hell out of him.” Joe seems a wee bit fixated on high school.

Biden went on.and said that President Trump was being “falsely masculine” for refusing to wear a mask because people will die.

‘This macho stuff, for a guy — I shouldn’t get going, but it just, it costs people’s lives. It’s costing people’s lives,’ Biden told CNN in a sit-down interview conducted outside his Wilmington home.

‘Presidents are supposed to lead, not engage in folly and be falsely masculine,’ Biden said.

‘I mean, every leading doc in the world is saying we should wear a mask when you’re in a crowd, and especially when you know you’re going to be in a position where you’re going to inadvertently get closer than 12 feet to somebody. I know we’re 12 feet apart, I get that,’ Biden said.

He referenced people from his school days. ‘They walked around with a ball in their hand but they didn’t like to hit very much,’ Biden said.

Asked what wearing a mask projected, Biden responded: ‘Leadership. What it presents and projects is leadership. Presidents are supposed to lead, not engage in folly and be falsely masculine. It reminds me of the guys that I grew up with playing ball. They’d walk around with a ball in their hand, but they didn’t like to hit very much.’
Source: Daily Mail

Zero pushback from the Clown News Network on any of it.

Let’s not forget that we were told by the “experts” all the way back in February that masks are not effective in preventing coronavirus infection and they’ve completely flipped on that in just a few weeks.

They are NOT effective in preventing general public from catching #Coronavirus, but if healthcare providers can’t get them to care for sick patients, it puts them and our communities at risk!
https://t.co/UxZRwxxKL9

That doesn’t even make sense–don’t wear a mask because it won’t protect you…also, our healthcare providers need masks to protect themselves.

Sorry, guys…you’re gonna have to explain that one to me.

If questioning how effective wearing a mask is outdoors with no crowd is now considered “macho stuff” just wait until they get a load of what masculinity really is.