Elon Musk has managed to piss off the cancel culture crowd.

He told the COVID fear-porn peddlers that his factory was going back to work or moving to somewhere they could.

He announced that if the jackboots wanted to arrest anyone for defying the order, it was him alone, and not any of his employees that should pay the price.

And there was nothing they could do about it… except swear at him on Social Media.

Which one congresswoman did. Resulting in this response: 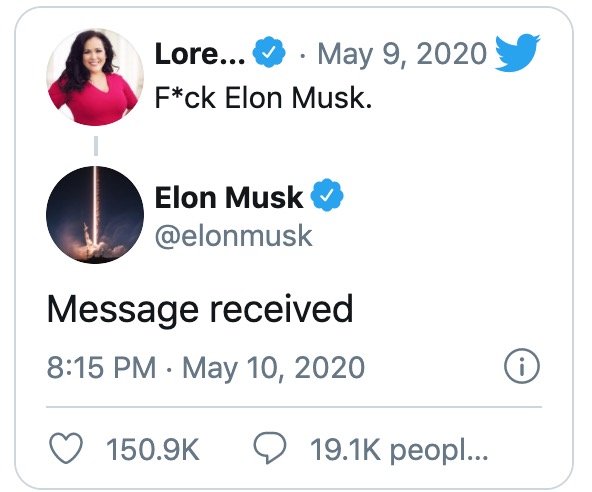 He also said this, around the same time.

Note the emphasis on Constitutional freedoms. 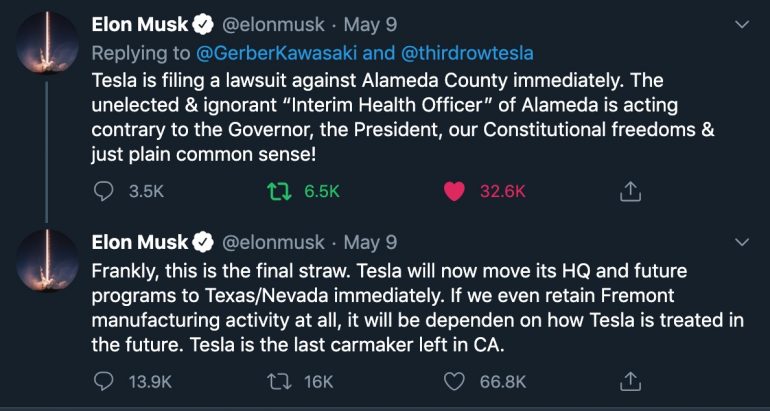 …and has called for the cancellation of cancel culture.

It led us to wonder… does the trend cut both ways? What trend, you might ask. Fair enough. Here’s what we mean:

There is a trend among people on the Left that if someone allegedly on the right — say Jeff Flake, McCain, or Mitt Romney — kisses enough Democrat ass by regurgitating their talking points, they are suddenly shown what’s been dubbed ‘Strange New Respect’ in the press and elsewhere on the Left.

You might remember we even saw a rehabilitation of Dubya’s ‘War Criminal’ and ‘BusHitler’ reputation in 2015 when a new villain blew into town for being sufficiently negative toward Trump.

Now that Elon Musk is been pissing off all the right ‘Blue Checks’ in Twitter, and has Democrats frothing in circles, does this trend work in reverse, too?

Has it changed our readers’ attitudes to him or to Tesla?

We’d love to hear what you have to say about us. You can let us know in the poll or in the comments below.

Have your views toward Elon Musk and Tesla changed?