After a two-motorcycle collision the former US Rep was taken, by helicopter, to the hospital.

An unsafe lane change by a third driver caused emergency braking by the two motorcycles involved. The second motorcycle did not stop quickly enough to avoid hitting the lead motorcycle. Col West and the other rider were described as having ‘non-life-threatening injuries’.

[Editor’s note: this seems a good time to remind drivers to be particularly aware of motorcycle traffic since they are a lot more vulnerable than the rest of us if things go South.] 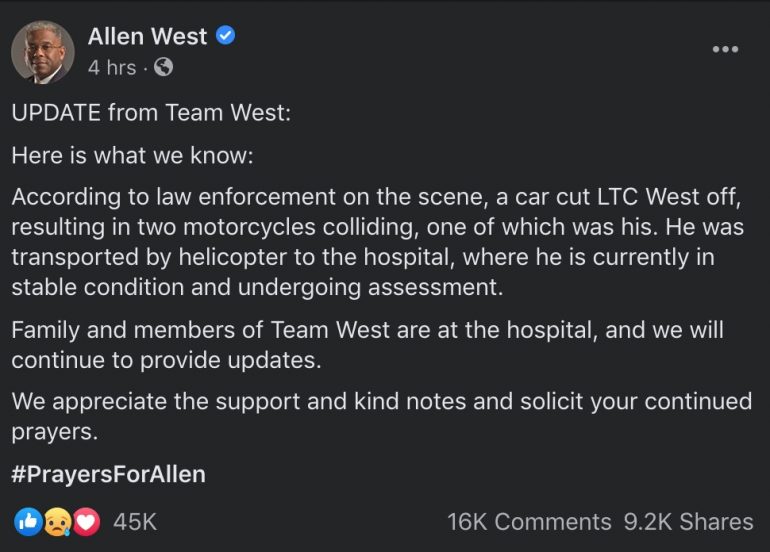 We wish both riders a speedy recovery.

Team West here with the latest update as reported in the official press release posted this morning:
On his drive back from the “Free Texas Rally” in Austin, TX, Lt. Col. Allen West was involved in an accident when a car cut in front of him. He is recovering, in stable condition, and has his family with him.
Local law enforcement reported that “an unidentified vehicle changed lanes when unsafe in front of two motorcyclists. The motorcyclist attempted to brake, and the rear motorcyclist crashed into the front motorcyclist. Both motorcyclists were transported to Baylor Scott and White in Waco to be treated for non-life threatening injuries.”
Allen West is currently dealing with a concussion, several fractured bones, and multiple lacerations. Though these injuries are serious, Lt. Col. West stated, “I am alive by the grace of God.”
He plans to continue to be a proponent for freedom and the state of Texas, and will resume his normal calendar of activities as given clearance by his medical team.
LTC West thanks the public for their well-wishes and outpouring of support, and continued prayers on his behalf are appreciated.

Team West update:
LTC West is resting and in stable condition. We anticipate him being released tomorrow and heading home. Thank you for your prayers and support. He will be taking a week off to recoup and looks forward to seeing you all again soon.

LTC West has been inundated with love and support, and is deeply appreciative. He requests in lieu of flowers, etc, please give to Mighty Oaks Warrior Programs.
You may give in his honor online or via mail at Mighty Oaks Foundation, 38397 Innovation Ct. Ste 101, Murrieta, CA, 92562