A new book set to be released in June is casting a very different light of the relationship between Bill Clinton and Jeffrey Epstein.

In the New York Post, authors Alana Goodman and Daniel Halper published a rather spicy excerpt from their upcoming exposé to be released on June 2, “A Convenient Death: The Mysterious Demise of Jeffrey Epstein.”

In the book, their source says that Bill Clinton wasn’t close with Jeffrey Epstein because of his penchant for sex with underage girls, but because the former president was carrying on an affair with Epstein’s ex-girlfriend and alleged procurer of said underage girls, Ghislaine Maxwell.

Goodman and Halper write that Clinton took several trips with Maxwell on Epstein’s plane known as the “Lolita Express” to Epstein’s private island.

Ghislaine Maxwell, a constant presence at the ex- president’s side during these trips, was the primary reason Clinton let Epstein ferry him around the world.

“[Bill] and Ghislaine were getting it on,” a source who witnessed the relationship said in an interview. “That’s why he was around Epstein—to be with her.”

The source explained that reporters have been missing the point about the Clinton- Epstein relationship by focusing on Epstein’s sex crimes. “[Clinton’s] stupid but not an idiot,” the source says, dismissing the idea that the ex-president was sexually involved with children.

Clinton’s primary interest in Epstein was the woman he once dated and who allegedly helped procure her ex-boyfriend’s future victims. 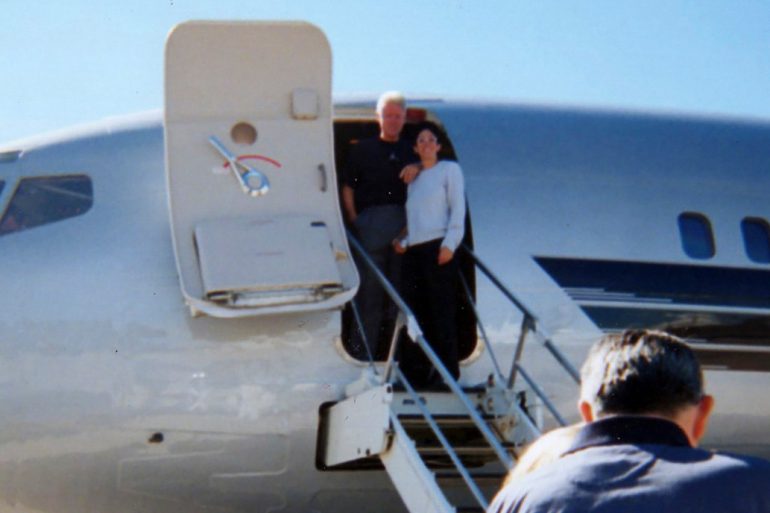 The book claims that Bill used Epstein as his alibi. The source explains, “You couldn’t hang out with her [Maxwell] without being with him [Epstein].” The source goes on, “Clinton just used him like everything else.”

The “coziness” of the pair was noted in New York social circles, and even in a 2002 article in New York Times magazine that noted Clinton and Maxwell were spotted dining at Madison Avenue’s famous Italian eatery, Nello. Maxwell was also at Clinton’s side when Hillary declined to attend a New York education gala in 2001. The British socialite was also a “fixture” at Clinton events.

The relationship also carried over to the Clinton Global Initiative and Clinton Foundation. Maxwell became somewhat of a fixture at these events. It was there where she was even served court papers about her participation in Epstein’s abuse.

On July 31, 2010 Maxwell was among the few guests to attend Chelsea Clinton’s wedding at the former Astor estate in Rhinebeck, New York.

A statement by one of Epstein’s victims seems to confirm that Clinton’s interests weren’t with the young girls that were present. She says that although she was on Epstein’s private island when Bill Clinton was there, she didn’t have sexual relations with him nor did she see him engaging in sexual acts with anyone.

“I have seen reports saying or implying that I had sex with former president Bill Clinton on Little Saint James Island,” [Epstein accuser Virginia] Giuffre has said in court documents. “Former president Bill Clinton was present on the island at a time when I was also present on the island, but I have never had sexual relations with Clinton, nor have I ever claimed to have such relations. I have never seen him have sexual relations with anyone.”
Source: New York Post

Only Bill Clinton and Ghislaine Maxwell know the extent of their relationship, and if they were having an affair it’s not likely that they’d actually admit it publicly.

The allegation of an affair half-exonerates and half-condemns Bill–he might not have been messing around with underage girls, but he may have been sleeping with the woman who recruited them for abuse and used a known pedophile as his alibi. That’s definitely not a good look.