Lefty Twitter went nuts sharing the vid and pointing out how awful the Trump administration was before getting fish-slapped with the truth.

This is what happens when you get your “news” from a late-night comedy show.

On Thursday, late-night comedian-turned-political commentator Jimmy Kimmel posted a video clip of Vice President Mike Pence allegedly caught in a “hot mic” moment saying that he was carrying empty boxes of personal protective equipment to a medical facility. But that’s not what happened at all. Kimmel called it a “publicity stunt” and the clip was viewed over a million times. It was then shared by all sorts of blue-check lefties including those in the press.

In the full video of the event, Pence can be seen delivering multiple boxes of personal protective equipment to the Woodbine Rehabilitation and Healthcare Center in Alexandria, Va.

After being told that all the PPE has been unloaded and that the boxes remaining in the van are empty, Pence jokingly says, “Should I carry the empty ones? Just for the camera?”

Pence closed the doors to the van immediately after making the remark, which drew laughter from his staff.

Polster and lefty Verified Twitter User™, Matt McDermott, clearly gets his “news” from Jimmy Kimmel. He shared the video on Twitter on Friday and it went viral pretty quick.

He then went on a bit of a rant about the Trump administration in a short thread.

Additional context to @jimmykimmel segment. With 75,000 Americans dead, Pence is joking about about empty boxes of PPE during a publicity stunt, after the White House press secretary said they had no time for "publicity stunts" in the middle of a crisis. https://t.co/hFeSp83lJs

Guess who jumped on it? Third-rate actress Alyssa Milano.

Pence was caught on mic delivering empty boxes of PPE to a hospital.

Fuck the @GOP and this administration. pic.twitter.com/28uDy88V3B

So did a number of “journalists” and Democrats–but I repeat myself. Conservative journalist, Julio Rosas, noted that among the people spreading this “Fake News” were: NBC’s Andrea Mitchell, New York Times columnist Jamie Bouie, Vox reporter Aaron Rupar, and co-founder Matt Yglesias. CNN political analyst, April Ryan, wrote in a now-deleted tweet, “Some Evangelicals said they supported Donald Trump because Mike Pence is supposedly a devout Christian but Exodus 20:16 says ‘You shall not lie.’ Carrying empty boxes & pretending they’re PPE supplies for cameras in a pandemic is an shameful lie… & a SIN! #RepentPence.”

Andrew Bates, Joe Biden’s director of rapid response wrote, “This is a metaphor for so much of their botched response [to the pandemic].”

And that was just quote tweets, here are some of the people who gave it a straight up retweet: pic.twitter.com/D0j1NQBBxo

Hmm. When you’re on the defensive for being dishonest & corrupt, perhaps best not to forward fraudulent stories from Jimmy Kimmel (that he’s admitted were false)? You are claiming to be a journalist, after all…. https://t.co/tYsgKJGxpR

Joe, you chased after Trump for 2 years like a teenage girl throwing her panties at the latest boy band; now you pretend to be this indignant paragon of virtue outraged at everything he says & does. All to get invited to DC cocktail parties & thrill the 13 people watching MSNBC. https://t.co/XG9P0Bwrbp

Scarborough has deleted the tweet, but it was because he was shamed into doing so.

I guess Twitter is a full time job. I apologize to Mike Pence for retweeting a tweet that had been disproved. I’m deleting now.

Apparently none of these geniuses peddling “Fake News” via a comedian’s “deceptively edited video” realized that they can watch the entire unedited video on C-Span to ensure that the claim was true.

Conservative journos noticed that that was indeed possible using a simple thing called a “web search.”

Here's an unedited version of @VP Pence delivering PPE to Woodbine Rehab Center. The clip from @JimmyKimmel and sent viral by @mattmfm & others is quite deceptive. Pence is clearly joking when he talks about empty boxes for the camera, & shuts the van doors right after the quip. pic.twitter.com/HyV8iBiljS

Kimmel later admitted that he couldn’t recognize a joke when he saw one, which is no surprise to anyone who watches his show.

But you know that tweet isn’t going to get near the traction that the original video did, right? 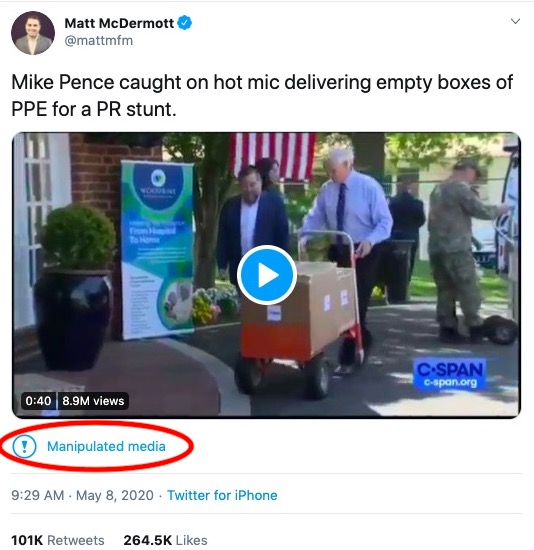 Even Steele-dossier-peddling Buzzfeed debunked the story.

I can't believe I have to debunk this shit https://t.co/J3avyHtsvO

So did CNN’s K-file reporter:

Mike Pence carried a bunch of loaded boxes in and then made a joke about carrying the empty ones. And he never actually carried them and closes the van door.https://t.co/kffkAD9mxfhttps://t.co/eBXgCKw2Op

It got so big that PolitiFact weighed in:

Despite the fact-check, Matt McDermott is doublin’-down!

The Vice President of the United States is performing publicity stunts (and quite literally admitting it on camera) during a pandemic that's left thousands dead and millions out of work. Normalizing that is a choice.

McDermott is then lectured about taking the high road by David Mack of Buzzfeed.

I kind of disagree! He was in fact caught on hot mic. The truck was in fact filled with empty boxes. The Vice President did in fact explicitly say the whole thing was a PR stunt. It's bad and would be a weeks long scandal in any other Administration!

Pro-Tip: If you’re being lectured about truth and the “high road” by someone who works for pee-tape-peddling Buzzfeed, you’re on the wrong track.

Just take the “L”, bro… unless the likes and retweets are worth more than your reputation.