It was supposed to be a nationwide morale-building exercise in response to the Coronavirus lockdown. It ended in tragedy.

You may remember how the Blue Angels and the Thunderbirds were doing flyovers over various American cities to help moral and show tribute to the heroes in the current crisis.

The Candian military sent their own national aerobatics team on a similar national tour. The planes they fly in are the Canadair CT-114 Tutor, which had been used in training fighter pilots since the ’63, were an iconic piece of Canadiana as the Snowbirds aerobatic team since 1971. They were scheduled to see their final retirement in December.

Moments after takeoff, one of the Royal Canadian Air Force’s Snowbirds began a steep nosedive, with the plane crashing into a residential neighborhood, and both occupants ejecting.

Fortunately, the doomed plane narrowly missed any homes, while occupants were outside watching what was supposed to be an uplifting flyby.

#Snowbird being rescued off roof in #Kamloops pic.twitter.com/fxNkjXaH5h

LESS fortunately, those IN the plane did not fare so well. The pilot landed on the roof of a house very near the wreckage, reportedly with both legs broken.

Capt. Jenn Casey, spokesperson for the Snowbirds, has been identified as the crash’s one fatality. Before joining the Snowbirds 2 years ago, she had served as a reporter, news anchor and producer at an East-coast news station.

The RCAF has suffered another tragic loss of a dedicated member of the RCAF team. We are deeply saddened and grieve alongside Jenn’s family and friends. Our thoughts are also with the loved ones of Captain MacDougall. We hope for a swift recovery from his injuries. – Comd RCAF pic.twitter.com/UZKJa6OT3S

At the time of this writing, the cause of the crash has not yet been announced.

The Chicago Sun-Times described it this way:

A Canadian acrobatic jet crashed into a British Columbia neighborhood Sunday during a flyover intended to boost morale during the pandemic, killing one crew member, seriously injuring another and setting a house on fire. Video appeared to show at least one person ejecting.

“It is with heavy hearts that we announce that one member of the CF Snowbirds team has died and one has sustained serious injuries,” The Royal Canadian Air Force said in a tweet.

…Rose Miller lives directly across the street from where the plane hit. She’d watched the Snowbirds arrive on Saturday, and she went to her front window when she heard the roar of jet engines.

Miller said she heard a loud bang and wondered whether it might be a sonic boom. Then she watched the plane smash onto the ground.

“It looked to me like it was mostly on the road, but it just exploded. It went everywhere,” she said. “In fact, I got a big, huge piece in my backyard. The cops said it was the ejection seat.”

This is a photo of the full team. Capt. Jenn Casey is the one on the right. 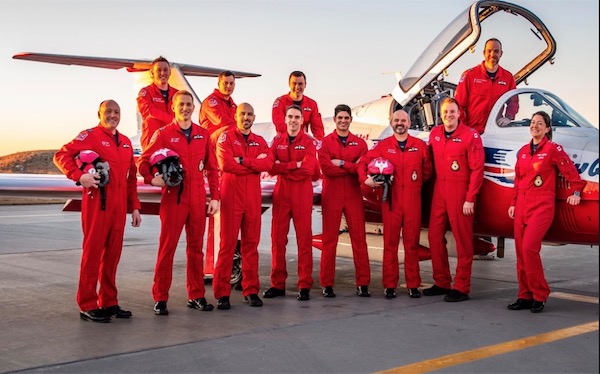