The value of lives vs money is the grid the media *wants* us to see the virus response through. But it’s not the only one we have to work with.

And in most instances, it isn’t even the most helpful or accurate one.

To look at other paths we could have been taking, we first need a clear view of the one we’re on now.

‘If it bleeds, it leads’ is a famous line describing journalism. If it seems like the folks on TV and in the papers only have bad news to tell us, that’s because panic is good for the bottom line. It’s a dopamine hit for the public, and it’s advertising dollars for the company.

They are literally incentivized — by the public — to feed the worst instincts in a society. And this year, it bit us all in the ass. Big-time.

It’s easy to forget that most of our information is filtered through people conditioned to see the worst in a situation, and worse, that we’ve bred species of public figure that has been carefully conditioned to ‘play it safe’ and go along with consensus thinking.

Nobody remembers the one guy in 10,000 who had the wrong opinion. It’s the guy with a unique opinion who gets it wrong that is remembered. And BLAMED. Similarly, the guy who warns of catastrophe when no disaster comes is quickly forgotten, but the guy who says ‘all clear’ before the anvil drops from the sky is demonized, fairly or not.

Why Most Politicians Are Gutless

Politicians, for the most part, live and die by their next election. Period. Even the ones we may otherwise like have to keep that reality in mind. Certain bold and polarizing actions can only be taken when concerns about your chances of re-election are not holding you back. Obama said so himself, on that ‘Hot Mic’ moment with those Russian officials.

Throw any crisis with a domestic death toll and an uncertain future into the mix, and you quickly see what people are made of. You see who the cowards are, who the tyrants are, and underlying motives are unmasked.

The Path Of The Coward

We have, as one example, Oregon’s Kate Brown. Her state is in the lowest 20% in Chinese Communist Party Coronavirus deaths in the whole country. Four million people, and about 100 deaths. She is locking her State down until January 6th.

After we’ve already managed to ‘flatten the curve’ in even some of the worst hotspots, responding to an illness with a 14 day incubation period, and a comparatively low risk to the young and healthy, there is nothing to support that.

That is the helicopter parent’s reaction to the threat. The fearful and overly-sheltered all-risk-is-bad types.

There’s an inherent problem with that response. It’s passive. It’s reactive. It’s a hide-in-your-bomb-shelter mentality where all the world is seen as a threat, but no proactive action can be taken.

We need to face facts: there IS no short-term solution. This pathogen is out there, whether we like it or not. We have treatments of varying degrees of effectiveness, but nothing even remotely resembling a silver-bullet cure. Sorry to be the one to break it to ya, but waiting around hoping such a silver bullet will be discovered to make our fear ‘go away’ is unrealistic.

A vaccine, supposing one is eventually developed, is still a long way off. If we hid in our homes until it was ready, our economy would surely collapse long before it was commercially available.

Here’s why vaccines are a false hope: vaccines with certain familiar viruses like the flu are not 100% effective. Viruses can mutate. We can see different strains. What will do a good job protecting against one strain might be entirely ineffective against another.

Suppose we all get vaccinated, but a new strain shows up. Do we all go back into hiding again?

There’s also a little secret about vaccines that nobody in the press seems willing to talk about. Vaccines are the great hope of the nervous for exactly one reason. They produce antibodies. If everybody gets immunized, (or at least, say, 80% of us) we achieve what’s called ‘herd immunity’ and the virus will hit so many dead-ends that it can’t spread to those who are most vulnerable to the worst effects. In other words, the virus is defeated.

He got sick and recovered. Judging by the surprisingly high percentage of randomized antibody spot tests we’ve seen in some parts of the country, plenty of people who came into contact with this illness didn’t even get symptoms. Their immune systems recognized a threat and killed it off long before it became a problem to the host, building one more antibody into the immune system’s antiviral defense database in the process.

There is a different way to handle risk both responsibly and proactively. One we should have (hindsight being 20/20) done from the beginning. It’s a model we’ve used in past crises.

In the Second World War, Germany was bombing London. The imminent threat of death was very real. But there was too much to do, the city couldn’t afford to grind to a halt and go into hiding. They had to ‘Keep Calm And Carry On’.

In fact, that is PRECISELY the context that the now-famous poster was first printed. 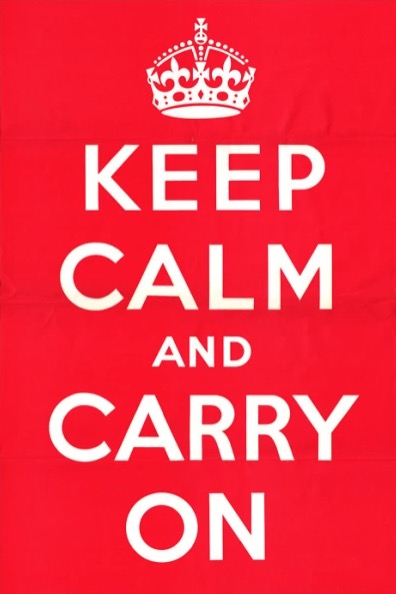 Rather than hide in their basements (or the London Tube) and desperately pray that disaster never comes, they took a clear-eyed assessment of the risks before them and asked themselves what the best way forward would be.

They settled on ‘Operation Pied Piper’.

Anyone who’s read many books written in the period, ‘Lord of the Flies’ and ‘The Chronicles Of Naria’ for instance, will be familiar with stories about British children being evacuated from the cities.

In this situation, the children were the precious and vulnerable whose lives were being protected from a real threat of death. The Brits didn’t shut down their cities, they organized limited resources around putting distance between the threat (in this case, bombs falling on cities) and the people most vulnerable to that threat, (the children) whose presence in the cites was in no way essential to ‘carrying on’. 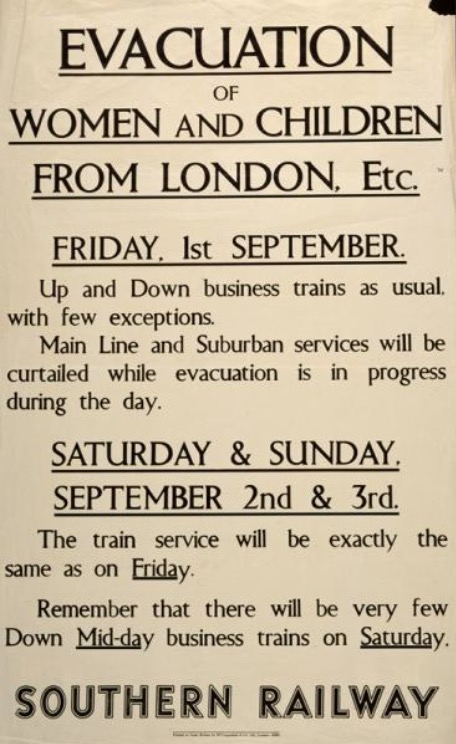 This evacuation happened in September 1939, well before the Battle Of Britain itself began, but when it was clear that war was on the horizon.

Like any response to a crisis, there is plenty of room for criticism of the Operation. There are, for example, complaints that this was an over-reaction to an exaggerated threat. That being said, it did one thing correctly.

It separated out the generalized threat of ‘we’re all gonna die’ to a more manageable problem they could work toward solving. ‘How do we protect our kids’.

What Is The Modern Equivalent To Pied Piper?

Regardless of one’s opinion of the particular outcome of that plan per se, this really ought to be a standard question in any public-policy response to serious threats of any kind, but especially domestic threats: how do we isolate that which is most directly under threat.

Knowing what we know now, the real threat is to the aged, as well as those with a specific profile of health risks. Fatal encounters with this illness are almost entirely drawn from this group.

It’s the aged and medically compromised who need special protection.

Instead of closing off the economy, let’s provide top-tier protection to the high-risk groups — (whatever we may decide that looks like), and let everyone else ‘Keep Calm And Carry On’.

Of course, with the Media pitching panic, and the politicians afraid of being *personally* blamed for every person who drops dead on their watch, the only way they will make this switch is if We The People demand it of them.

That way, they have the ‘out’ of washing their hands of the consequences and saying the people made me do it.

It’s time the people make the gutlessness of politicians work FOR our interests, rather than against them.

Dear America: The Early Church & Our Founders Wouldn’t Put Up With This Crap