At what point can we finally admit that the First Amendment is being used for anything BUT the exercise of a free press — now they are repeating Xi’s talking points.

There is a ‘study’ released in China where the Citizens ‘cheer’ the Government for how amazing their response to the Coronavirus crisis was.

Here’s the ‘news’ as CNBC reported it:

Citizens from just seven out of 23 countries rate their governments’ coronavirus containment measures as broadly positive, based on the “Global Crisis Perceptions” index released Wednesday by insights agencies Blackbox Research and Toluna.

The research, which surveyed approximately 12,500 people across 23 countries between April 3 and 19, asked respondents to rate their nations across four key indicators: national political leadership, corporate leadership, community and media.

China, where the virus is thought to have originated, ranked highest in the citizens’ survey, with a score of 85 out of 100. The world’s second-largest economy was followed by Vietnam (77), the United Arab Emirates (59) and India (59), in a list which saw Asian countries take the top spots.

Oh, OK — this isn’t China’s equivalent to Chernobyl at all. Oh, no. This is the Chinese Communist Party’s shining moment in history, leading the rest of us into … whatever kind of utopia it is that corrupt, soulless tyrants offer to credulous fools.

China leads the world in their competent response to this disease, do they?

And would we call them an ‘informed’ public? What about if they are critical of their government in the world’s largest surveillance state? 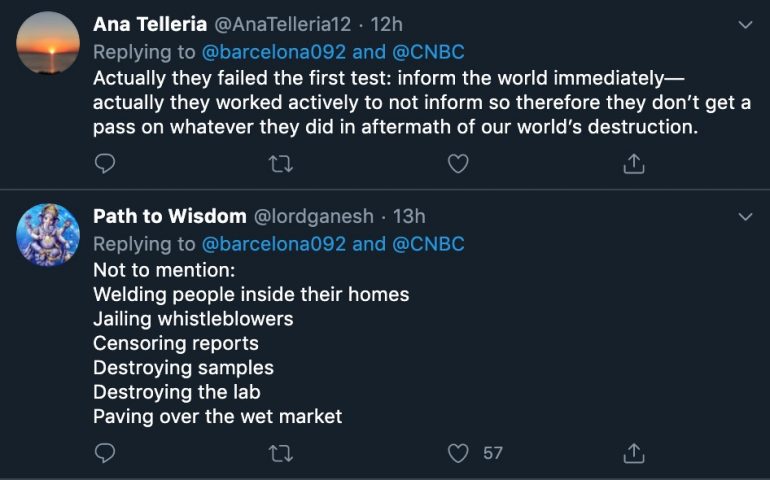