We’re in a new era when it comes to the race for the White House–a huge difference is the role of social media.

In social media, a well-made meme can get a message spread like wildfire and can even change the national conversation.

That’s part of how Joe’s ridiculous denial of any knowledge of Hunter’s connections with Burisma gained national attention by the mainstream media who were burying the story–and Nickelback was trending on Twitter.

This is why CNN got their panties in a bunch when President Trump tweeted a meme back in July 2017.

And heck, let’s be real, Trump’s Dream Meme Team is putting out some really great stuff.

LMAO: Trump’s Favorite Meme Maker Strikes Again… Is It His Best Yet? (Video)

To be fair, sometimes it’s just because there’s an easy target.

One Of The Dream Team Memers Makes An Ad Mocking Biden’s VP Search And It’s HILARIOUS!

Those on the other side of the aisle can’t seem to grasp the nuance of what a meme is–it’s supposed to be funny and still make a point.

President Trump tweeted out his appreciation for his “Keyboard Warriors” who are producing some incredible, creative stuff that is getting shared all over the web.

Biden’s campaign decided to jump on that tweet with an atrocious meme that is a perfect example that the Left can’t meme.

They included a mock poster saying that the coronavirus was endorsing President Trump for a second term.

Nothing would make COVID-19 happier than a vote for Trump.

Follow @BidenWarRoom if you’re ready for Joe Biden to beat Trump like a drum in November. ?pic.twitter.com/wJ1LU5mRXS 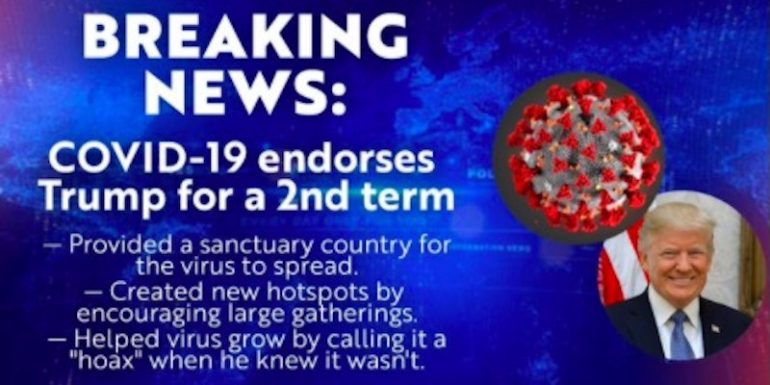 I’m almost embarrassed for them.

That is awful on so many levels–it isn’t funny, nor does it contain a scintilla of truth.

Let me refute their bullet points (which should never be included in a meme):

In a 2012 article in The Washington Post, documents obtained from bin Laden’s compound revealed a plot to kill Obama which would make then-Vice President Biden the President. The al-Qaeda leader said that Joe was “totally unprepared for that post, which would lead the U.S. into a crisis.”

Before his death, Osama bin Laden boldly commanded his network to organize special cells in Afghanistan and Pakistan to attack the aircraft of President Obama and Gen. David H. Petraeus.

“The reason for concentrating on them,” the al-Qaeda leader explained to his top lieutenant, “is that Obama is the head of infidelity and killing him automatically will make [Vice President] Biden take over the presidency. . . . Biden is totally unprepared for that post, which will lead the U.S. into a crisis. As for Petraeus, he is the man of the hour . . . and killing him would alter the war’s path” in Afghanistan.

So, here’s a little something that I put together… 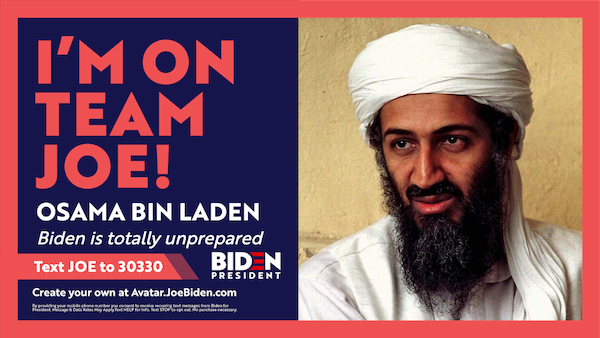 Thanks, Team Joe, for the meme-maker that is somehow still online.

THEY NEVER LEARN: Biden Campaign Puts Up An Avatar Maker–It Didn’t Work Out As Planned

The Left needs a lesson in memes, and who better to teach them than the King of Trump memes, Carpe Donktum?

Take it away, Carpe…