As we’ve noted before. The crazy thing about the Coronavirus isn’t the masks people are wearing, but the masks that are getting torn off. We’re getting our first look at who some people really are.

While it’s unclear what exactly happened to cause this video to start rolling, we can note a few details that serve as clues.

Oh, when Karens take a walk with their dogs off leash in the famous Bramble in NY’s Central Park, where it is clearly posted on signs that dogs MUST be leashed at all times, and someone like my brother (an avid birder) politely asks her to put her dog on the leash. pic.twitter.com/3YnzuATsDm

The chick on camera here is agitated while the guy filming is speaking with a calm and even voice.

She has a dog with her but the leash in her hand is not connected to the collar. She is also awkwardly holding the dog’s collar in her hand. We’ll come back to this point shortly.

For some reason, as we’ve said, this woman is being filmed. As she is in a public space, this violates no laws. But she doesn’t like being filmed and approaches him to tell him to stop.

He continues filming and politely asks her not to come any closer.

She threatens to call the police if he continues filming. He calmly invites her to do just that. The video captures a frantic call to the police claiming a black man is threatening both her and her dog and police must send help immediately.

She makes that allegation about the danger she is in more than once while dragging her dog around by the collar. The poor mutt’s front feet hardly touch the ground in this whole video.

We can’t help but notice that this bro stops filming the moment she clicks the leash back onto the collar. Could this be what initiates his filming in the first place?

So we’ve discovered someone who is willing to fabricate a bulls**t story to the police just because she is offended.

We’ve unmasked an actual racist, unlike the army of bogus racists the media keeps warning us about. We’ve got ourselves some hard evidence that — in at least some cases — women are capable of making bogus accusations as a tactic to manipulate people and situations.

And now the story gets weirder.

Somebody went and doxxed this chick. 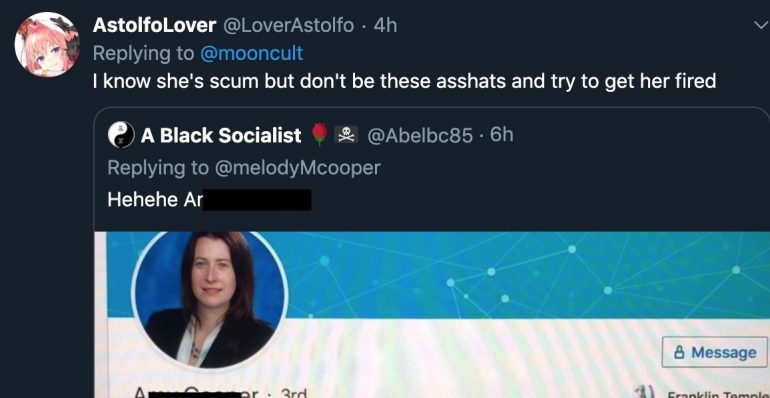 You’ll notice we’ve blacked out her name. Being internet famous and mocked for her stupidity is enough for us. There are some whackjobs out there more than willing to escalate matters in situations on this, and we don’t need any of that on our conscience.

But because she was doxxed, her employer was contacted. Her employer gave the following statement. (We intentionally excluded any identifying information from the tweet.)

There are a lot of comments, naturally. But this may be the best of the lot.

Although, this one probably deserves an honorable mention…