This is the most insane story that I’ve ever seen.

Colorado couple Justin Montney and Alexis-Athena Wyatt were planning their life together and the bride-to-be found a company to videotape their wedding. She signed a contract for services and the couple paid a deposit of $1,800.

In February, just months before their May 23 wedding date, 22-year old Alexis-Athena tragically died in a car accident when she lost control of her vehicle on an icy road, drifted into oncoming traffic, and was hit by a semi-trailer.

How utterly devastating for Justin.

As he buried his would-be bride and canceled the wedding plans, he was surprised by the response from the videography company when he asked for a refund. They refused to refund the deposit despite the death of the bride. They insisted that the deposit was non-refundable and that it was in the contract. They also said that due to the COVID-19 lockdown, they just don’t have the money to refund to him. Justin even admits that the deposit was non-refundable, but says that these were special circumstances.

When Justin’s friends heard what was going on, they took it upon themselves to post negative reviews of Copper Stallion on a popular wedding planning website.

Justin also posted a negative review on the site, TheKnot.com, with his story.

That’s when all hell broke loose.

The company posted some horrific social media posts mocking Justin and hoping that he mourns the death of his fiancée on what would have been their wedding day. 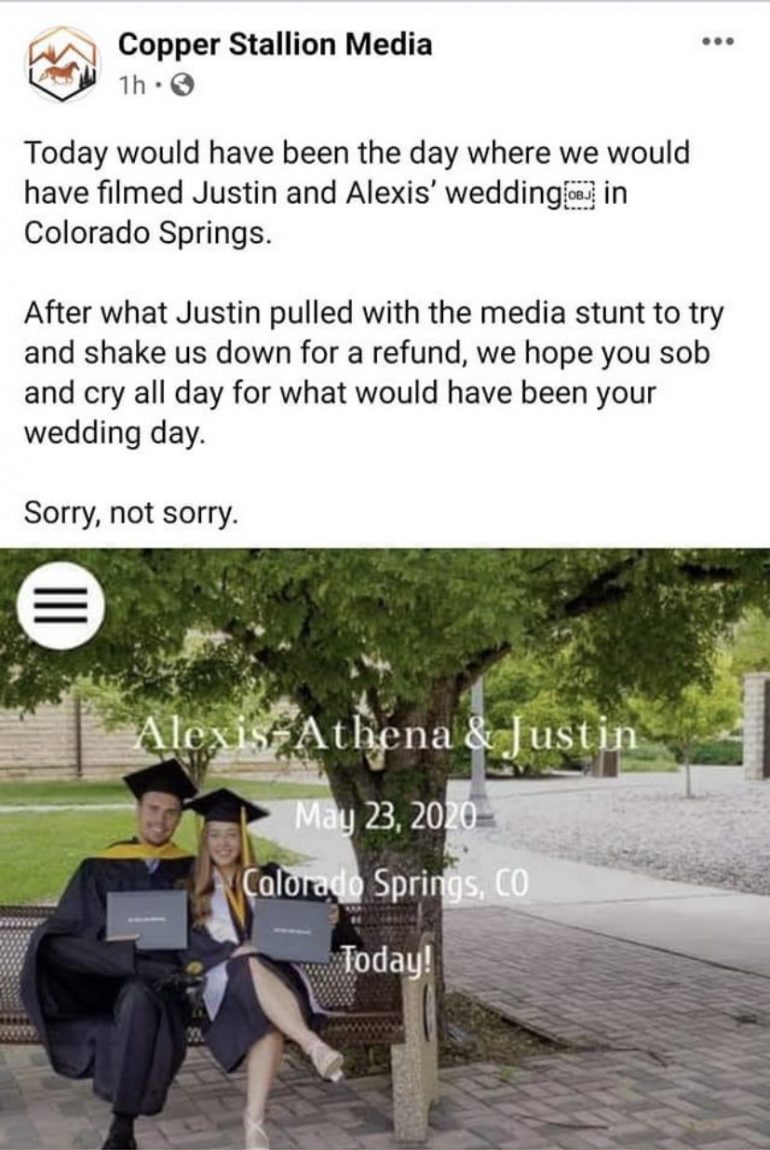 Watch the report on KRDO 13:

There’s oh, so much more.

There ain’t no chance in hell that’ll work considering the crap that they’ve pulled with regard to Justin. Also, it isn’t a smear if it’s true, dumbasses.

Copper Stallion Media set up a website in Justin Montney’s name and posted “their side” of the story. It’s just truckloads of awful.

By the way, isn’t that a form of identity theft?

The incredibly insensitive website domain is justinmontneywedding.com and has the story from their perspective including the emails that were exchanged.

On February 17, Justin reached out by email to tell us that the wedding was off due to the death of his fiancée. We replied and expressed our sympathy and explained to him that all of our wedding contracts are non-refundable. He kept emailing us trying to get a refund and we kept reiterating that the contract is non-refundable. We eventually stopped responding since the issue was moot.

On May 18, 2020, Justin Montney emailed stating that since he did not hear from us or receive a refund, he was notifying us “that a presence will be taking place on social media” This statement shows malice and intent to harm the reputation of Copper Stallion Media.

Justin Montney then contacted the failing news station, KRDO in Colorado Springs, CO to tell his story. In the news story he admits that the contract was non-refundable but says we should give the money back due to the circumstance. Life is a bitch, Justin.

What the hell is wrong with these people?

It just goes on and on.

We understand a death occurred, but it’s not right for people to turn to the internet and sodomize the reputation of a company. This is malice and the intent was to do harm. We know Justin is still young and in his 20s but this was wrong. He could have quietly filed a small claim to ‘try’ to recoup the non-refundable deposit. Instead, he chose the internet to shake us down.

This website is registered with us for the next two years.

Let this is a precedent for anyone looking to bash their wedding vendor. Justin Montney said “presence will be taking place on social media.” Well, here it is, Justin.

Uh… that’s what online reviews are for. He can give a negative review if jerk videographers are so callous that they won’t refund a man in mourning his damned $1,800 deposit.

Sure, they had a legally binding contract, but the decent thing to do is just refund the money.

Copper Stallion Media is tossing aside its reputation for a deposit of $1,800.

Here are screenshots of the website with an atrocious photo of Justin at the top of the page: 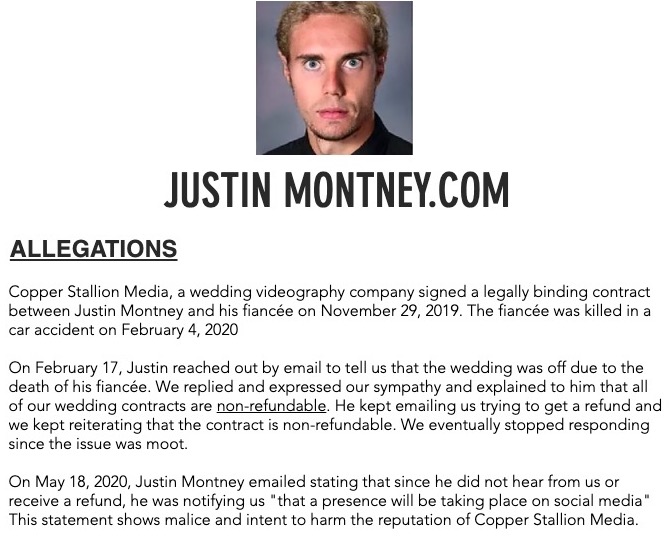 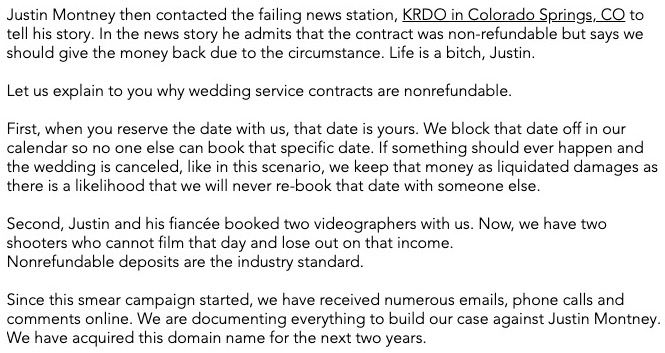 [It’s clear here to a human being with a brain that Justin suggesting pushing the reservation forward 10 years is a snarky response to their refusal for a refund. Apparently, the folks over at Copper Stallion Media took the grieving man literally.] 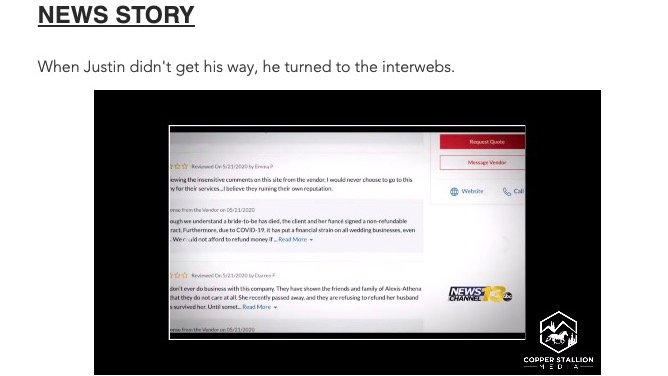 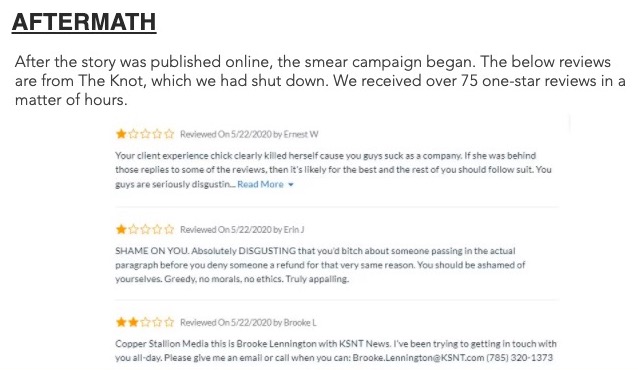 If you think that’s the end of it, you’re wrong.

They also posted YouTube video clips of the hate that they’ve received.

They doxxed 13 “people associated with Justin Montney” linking their Facebook profile pages on the nasty website they set up and stated that these individuals would be added to their lawsuit!

Because of all of the negative reviews, they changed the name of their Yelp page to Justin Montney. 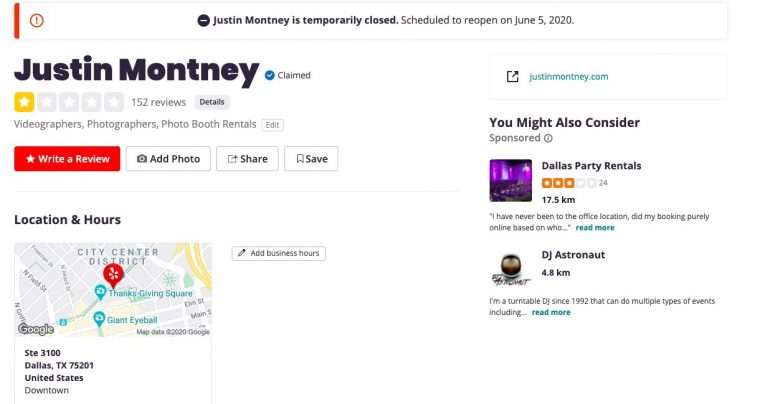 So, now that they’ve got all the one-star reviews, they’ve attached them to Justin’s name.

But wait! There’s even more!

Copper Stallion Media issued a statement saying that one of their staff members committed suicide and blamed this on “cyberbullying” due to the “online smear campaign” that began on May 20, 2020.

Some on social media are saying that the Copper Stallion Media employee that killed herself did so in 2018, not 2020 as they claimed along with a screenshot of the Facebook announcement below. The date highlighted reads December 22, 2018. 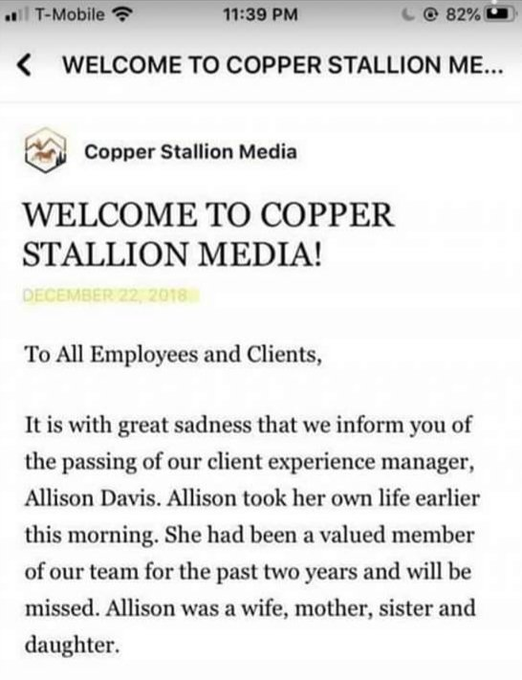 The Facebook page is now private, so this cannot be confirmed. It could be a manipulated image, but we can’t tell because Copper Stallion Media just hid their Facebook page from the public.

From their other actions with regard to Justin’s refund, it wouldn’t surprise me in the least if these people did indeed try to use the 2018 suicide of one of their employees to try to defame Justin Montney as a cyberbully.

Do you think it’s over yet?

It turns out that videographers have gone on Reddit and complained months ago that they were hired by Copper Stallion Media as contractors and had difficulty getting paid for the work they did. They also complain that the communication was unprofessional. (You don’t say!)

It appears that Jesse J. Clark, the man behind Copper Stallion Media, was accused of scamming 92 couples and in 2013 was charged and convicted. He’s what you’d call a “known entity.” He also seems to have a bit of a problem with anger management.

Jesse J. Clark, the wedding videographer accused of scamming more than 90 couples out of payments for wedding videos he never delivered, has run online wedding businesses during the past year despite several jail sentences and probation periods and a Suffolk Superior Court injunction.

Lawyer Nicholas Frye, who represents several couples who have won civil judgments against Mr. Clark, made the allegation Thursday. He was present in Dudley District Court as Mr. Clark was sentenced to two months in jail in an assault case.

Mr. Clark formerly operated SureShot Videography and SureShot Portraits LLC in the Shoppes at Blackstone Valley in Millbury. The studio abruptly closed in June after couples demanded their undelivered videos.

Mr. Clark, 29, of 203 N. Sturbridge Road, Charlton, was sentenced Thursday in Dudley District Court to 60 days in the Worcester County House of Correction for violating a restraining order and damaging his mother’s SUV with a baseball bat on March 10.

Didn’t I tell you this was the most insane story?