As the mother of three mixed-race children, I’d like to say…eff you. Eff you and your so-called “pervasive privilege”, eff your “liberal white guilt”, and eff your “soft bigotry of low expectations” by stepping aside as the Big Star™ to allow the “little people” a chance at fame. Eff you, you candy-assed, gutless wonders who have now decided that you know better than mixed-race people how they should identify. Eff you because due to your cowardice, you’ve essentially dictated to them how they should identify.

By stating so bluntly that only mixed-race or black actors can voice mixed-race cartoon characters, you are refusing to acknowledge that mixed-race individuals draw from both sides of their family. You’re now essentially saying that only the melanin-enriched side is worth identifying with. Why is it acceptable for a black voice actor and not a white one? That clearly displays your bigotry.

Kristen Bell, in her Maoist-style struggle-session public statement, explained that it was her “pervasive privilege” that made her oblivious to how “problematic” it was that a white woman would dare voice a half-white teen on a cartoon.

It was wrong and we, on the Central Park team, are pledging to make it right. I am happy to relinquish this role to someone who can give a much more accurate portrayal and I will commit to learning, growing and doing my part for equality and inclusion. pic.twitter.com/k8N73pAXOw

She includes a statement from the creative team of Central Park which reads, “Casting of the character of Molly is an opportunity to get representation right – to cast a Black or mixed race actress and give Molly a voice that resonates with all of the nuance and experiences of the character as we’ve drawn her.”

It also says, “We profoundly regret that we might have contributed to anyone’s feeling of exclusion or erasure.”

But hey, you can erase the white side, that makes no difference, right? After all, that’s precisely what Barack Obama did and look where it got him.

What’s shocking is how quickly things changed for the Central Park creators.

It was just January when the creator of the show, Loren Bouchard said, “Kristen needed to be Molly; we couldn’t not make her Molly. But then we couldn’t make Molly white and we couldn’t make Kristen mixed race so we just had to go forward.”

Yes, it seems that even though Bell had resonated with the character of Molly as an introverted teen, well, that’s just not enough. Bell and the Central Park creative team insist that we must look at things through a racial lens.

How is it that a white person cannot portray a mixed-race person even if, as is the case with Molly in Central Park, her mother is white? How is it that only a mixed-race person or a black person could do this? Are you saying that a black actor can comprehend what growing up mixed is like but a white actor cannot? It just shows the lack of awareness that you have of what it’s like to be someone of mixed heritage.

My children, and many of the mixed-race people that I know, embrace both sides of their heritage.

I’ll even give an example for you lunkheads. A few years ago, one of my kids decided to participate in a “Multicultural Day” at school. When he looked at the list of cultures being represented, both East Indian and West Indian (my heritage) were listed. He chose to represent part of my husband’s heritage–Scotland. So, being the amazing kid that he is, he memorized the Robert Burns poem “Address To A Haggis” and requested that I prepare one, which I did. He was the only kid there representing a European country and the many students and parents that were immigrants came and asked him questions about Scotland and its traditions. He was proud to represent the land where his grandfather was born.

But, according to you idiots, he should have done what, precisely? Join the group representing India? My family left there generations ago for the Caribbean and we have no ties to India other than preparing the same kind of food and a smattering of the language. Should he have joined the kids at one of the Caribbean tables? The ones who say that they didn’t know that there was such a thing as Indo-Caribbeans? Oh, but that “erasure” doesn’t exist, right? [Insert eye-roll here.]

Perhaps you could learn something from my mixed kids after all.

They aren’t filled with self-loathing. They don’t hold it against my husband or his family that my ancestors were (likely) indentured servants that had their religion, language, and their very names stripped from them when they reached that lush, green island with white sand beaches. They embrace both sides.

This is my kids’ heritage right here.

It’s a beautiful thing to embrace both traditions, isn’t it?

Wokescolds like you don’t want to admit that there are nuances and colors other than black and white. Race is binary to you asshats. Except…it isn’t. What precisely is “white” and what is “black”? Is “white” including the British, French, German, Dutch, Russians, etc. who all have distinct cultures? How about black? Are all African tribes the same? Are they the same as those who are descendants of slaves in America? “Brown” includes everything from those of Indian heritage (like me) to Hispanics. You’re not even clear on the basic terms. This is the problem when you group people based on pigmentation alone.

But it’s even worse than that.

What is acting if not attempting to understand a character that is not yourself and portraying that in your performance?

Clearly, this new standard could be a real problem with continuing on in your careers.

Oh, that’s not the same, you say? Of course it is. If this is about “lived experience” then no actor anywhere can act as a character that they have not had actual experience being in real life. So, Kristen Bell is consigned to act as Kristen Bell her whole life. Yes, her “privilege” affords her that and no other.

By the way, this whole “white privilege” thing takes you to some very dark places.

As pointed out by @AdamantAnarchy in a cartoon on Twitter: 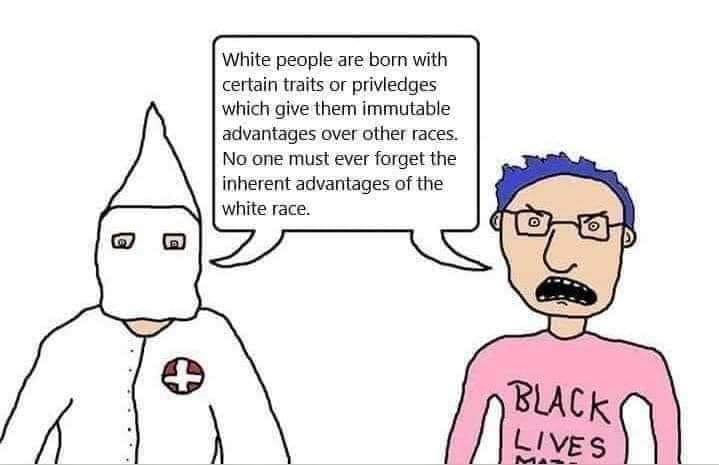 Although one argues genetic superiority and the other argues that it’s social and cultural superiority, the message is the same.

It’s also the message that you’re sending by erasing the white culture of mixed-race characters.

Is that what you’re trying to do?

I know it’s in vogue right now to virtue-signal your wokeness and appeal to BLM protesters and race-hustlers, but what you’re really doing is telling my kids that they need to get into the proper identity box based on race and that they should reject half of their heritage.

I’ve had to have more conversations about race with my kids than my parents had with me.

My son attending college had to sit through that absolutely racist “white privilege” teaching in high school and was told that he didn’t calculate his privilege properly because he’s half-white. He has been told by idiots like you that I am a “race-traitor” and my husband is some sort of “fetishist” for falling in love, getting married, and having children. He’s also been told that he shouldn’t exist and this hasn’t come from some sort of “right-wing” white supremacist group, this is from leftist, BLM supporters who want segregation in the name of “tolerance.” In other words, people like you.

What I’m getting at is that it is you assholes that are the racists and nobody has the balls to tell you except for me.

So, take your virtue-signaling bullcrap that is making my kids defend their very existence and shove it where the sun doesn’t shine.