America is on the razor’s edge of moral and legal insurrection created by Antifa and other liberal anarchists. They have used verbal arson to target millions of law-abiding Americans, who they claim are perpetrators of systemic and systematic destruction of black American life and safety. They have drawn a line and will condemn every one of the 63 million Trump voters who are white or black and their children and grandchildren with this vicious lie. The truth does not matter to these anarchists. These innocent Americans are told to just “Shut Yo’Mouth!”

The truth does matter. The anarchists and their liberal make-believe media apologists want all police officers, law and order supporters, and every white Trump supporter to stand accused, be convicted, and have their Constitutional protections stripped away by millions of social media firing squads.

Truth does matter and it must be used to decimate and destroy the unabridged, unfiltered, liberal-infused toxic lies used to polarize America. Do Not “Shut Yo’ Mouth!”

Here is the truth. On May 25, 2020, George Floyd was killed in Minneapolis, Minnesota, during an arrest by Derek Chauvin, a white police officer who knelt on his neck. White guilt was not the perpetrator and hundreds of thousands of white law enforcement officers who protect and serve did not kneel on Floyd’s neck. Ask yourself, in his day, did Rev. Martin Luther King condemn millions of white Americans for the heinous racist actions of whites in the south or the north? The answer is no. He did not then and would not now.

Here is another truth. Breonna Taylor a 26-year-old who was an essential worker providing health care during the Covid-19 pandemic earlier in the year was fatally shot by police executing a no-knock warrant in her Louisville, Kentucky on March 13. They were investigating two people suspected of selling drugs, neither of whom was Taylor. The facts as known are clear. Those officers killed an innocent woman, not the other several hundred thousand officers across America.

America is not just a collection of ethnicities and races. It is a family created by the nation’s founders to establish a more perfect union. Not a union to be vaporized by feared actions of Antifa anarchists or destroyed by incendiary race mongering rhetoric uttered by riotous criminals who rob, loot, and even murder. They seek to contaminate America’s laws and cremate the nation’s order. Their battle cry is, “Shut Yo’ Mouth!” or be condemned!

Truth does matter. It must be used to decimate and destroy the unabridged, unfiltered, liberal infused toxic lies used to daily polarize America by make-believe media and liberal Antifa activists.

The nation is at a tipping point. Antifa anarchists want every American to believe that being born white is to serve an automatic life sentence of white guilt. This should be contemptible to any rational person. Yet, that is the toxic lie being perpetrated by many supporters of Black Lives Matter. This same illogic was used in the reverse against famed slavery abolitionist Harriet Beecher Stowe, author of “Uncle Tom’s Cabin. She was told to “Shut Yo’ Mouth!” when she campaigned for the abolition of slavery! At the time, Americans were told that blacks, slave or free, were 3/5th of a person. What if she had listened to the lies used against enslaved and free blacks?

Nearly a century later Rev. Martin Luther King managed to stand up, speak out, be beaten, and go even go to jail when he led the modern civil rights movement and announced to the world that “I Have a Dream.” He was told to “Shut Yo’ Mouth!” over and over again by racist anarchists and public officials who wanted to continue to defy the U.S. Constitution.

Yet, it is the very words of Rev. King’s “I Have a Dream” speech, “I have a dream that my four little children will one day live in a nation where they will not be judged by the color of their skin but by the content of their character,” that race-baiting Antifa anarchists and their mainstream media cohorts trample to the ground today. They are not interested in color-blind justice but only in condemning innocent Americans to be deplorables, or to allow Joe Biden to label blacks as being “Not black” if they do not vote for him.

Rev. King’s Dream of freedom from fear by knowing the truth which began in part with Harriet Beecher Stowe’s Uncle Tom’s Cabin is well documented by my co-author Susan Swift and my call-to-action book called Shut Yo’ Mouth! How the Left Plays the Race Card to Silence Conservatives and How to Stop It. It is a cutting-edge well-documented illustration of the destructive liberal practices over 150 years. It illuminates countless election, legal, educational, entertainment, and even the many deadly riotous and murderous actions used against blacks, Christians, and their supporters by democrat anarchists.

It documents and exposes liberals’ targeted erosion of America’s founding values as part of their plan to increase centralized political control by using fear and intimidation.

Well here’s a new “Woke Message”–Do Not Shut Yo’ Mouth!

Be woke and stand up, America. Draw the line and refuse to “Shut Yo’ Mouth!” Injustice in the guise of ending systemic racism at the cost of freedom and law and order by riot is not justice but chaos and disorder.

Make no mistake. This Antifa and liberal mainstream media assault is clear, distinct, and targeted at Donald J. Trump and the millions of Americans who believe that law and order is not racist. Real law and order supporters believe that law and order must be color-blind and not be ruled by rioters and liberal Antifa activists infected with the white guilt virus. These anarchists plan to legitimize their reign of terror against democracy and a democratically elected president or his supporters by any illegitimate means.

Is the nation at a crucial tipping point toward racial destabilization? In a word, yes! Do Not Shut Yo’ Mouth and stand condemned for being white, for being Christian, for daring to be black and conservative or a supporter of peace through constitutional justice instead of fear and riotous lawlessness.

Liberal anarchists have hijacked race in order to destroy Rev. King’s dream and Harriet Beecher Stowe’s legacy of the creation of a color-blind America.

Be woke! The call to action is clear. July 4th is the celebration of the nation’s freedom from British rule. It must not be sacrificed to the modern tyranny of the mob. Do Not “Shut Yo’ Mouth!” On July 4th America’s only option is to stand up and stand free!

Stand up and be guided by the intent and faith of our founding fathers who embraced the words that God asked in Isaiah: 6:8: “Then I heard the voice of the Lord saying, ‘Whom shall I send? And who will go for us?’ And I said, ‘Here am I. Send me!’”

You are sent to not kneel to the tyranny of Antifa mobs and be silenced to “Shut Yo’ Mouth!”

“There comes a time when silence is betrayal. Our lives begin to end the day we become silent about things that matter. In the end, we will remember not the words of our enemies, but the silence of our friends. Only in the darkness can you see the stars.” 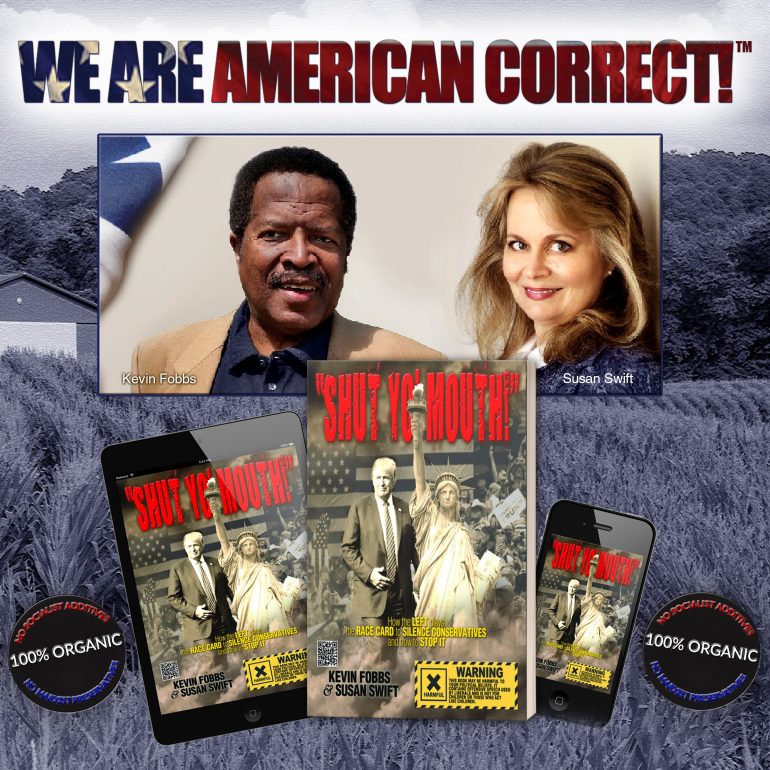