How quickly we’ve gone from that moment of near-unanimous agreement that one man’s death was an outrage, to leveraging that death for a political agenda. Now they have stepped beyond the US system and trying to leverage the ‘international community’ to achieve their goals.

The Founders fought against having a foreign power micromanage our lives. Now the Left seems hellbent on giving our autonomy away to random desk jockeys in an office tower in Brussels. Oh HELL no.

We LEFT the UNHRC because it was hopelessly corrupt.

Corruption, come to think of it, isn’t all that unusual for a UN agency. President Trump Sends EPIC Letter To WHO Threatening Permanent Withdrawal Of Funding

It’s a wonder we even tolerate their HQ on our soil.

But the ACLU is appealing, not to our courts or lawmakers, but to the hopelessly corrupt cesspool of UNHRC for redress of wrongs.

#DemCast has joined the coalition of families and organizations demanding the U.N. to investigate these human rights violations.

We denounce the violations and demand accountability with systemic change to ensure the health and safety of Americans. #BlackLivesMatter https://t.co/q6EMqc9oj7

And they have taken up all the bogus media talking points, and politicized exaggerations in an attempt to shame America on the world stage.

The group sent a letter on June 3 to one of the international body’s working groups asking for support for the end of the provision of military equipment and military-type training for police, the teaching of deescalation techniques, independent prosecutions and autopsies for “extrajudicial” police killings, and more.

“When a group of people of any nation have been systemically deprived of their universal human right to life by its government for decades, it must appeal to the international community for its support and to the United Nations for its intervention,” Floyd’s family attorney Ben Crump said in a press release. —Breitbart

Knowing how the left has mischaracterized AR-15s as ‘automatic’, ‘assault weapons’, and ‘weapons of war’ we can only imagine where this appeal to ‘demilitarize’ the police will take us.

We envision cellphone videos like the one where terrorists tore through London undeterred, because they were the only ones armed, and even cops had to wait for an armed supervisor to arrive. The use of ‘extrajudicial police killings’ is particularly offensive… implying that murder is somehow sanctioned among the police force. Specifically, racially-motivated murder.

In an unprecedented move, the families of George Floyd, Breonna Taylor, Michael Brown, and Philando Castile, together with over 600 rights groups led by the American Civil Liberties Union and U.S. Human Rights Network, are demanding the United Nations Human Rights Council swiftly convene a special session to investigate the escalating situation of police violence and repression of protests in the United States. Additional signatories include Black Lives Matter and the NAACP.

“Mamie Till Mobley made a decision to open the casket of her son Emmett Till so the world could see the atrocities Black people faced in America. I want people across the world and the leaders in the United Nations to see the video of my brother George Floyd, to listen to his cry for help, and I want them to answer his cry,” said Philonise Floyd, brother of George Floyd. “I appeal to the United Nations to help him. Help me. Help us. Help Black men and women in America.”

The groups warn of an “unfolding grave human rights crisis” in the United States and write that the recent police killings of unarmed Black people as well as police use of excessive force and repression of protests violate United States obligations under international law. They call on the U.N. to mandate an independent inquiry into the killings and violent law enforcement responses to protests, including the attacks against protesters and journalists. The letter also calls for a U.N. investigation into the firing of tear gas by President Trump in violation of international standards on the use of force. —Demcast

That Lafayette Park lie has been debunked six ways past Sunday. But it still makes for a good OrangeManBad soundbite, doesn’t it?

This appears, on its face, to be nothing less than an attempt to leverage a foreign stage HRC to influence an election they cannot hope to win on its own merits. The can’t win without repeating some version of the Russian Collusion smears that nudged voters worried about false claims about Trump and Russia, voters who had been browbeaten into believing they were true, to Vote Blue or stay home.

If a Human Rights Council denounces them, they can claim that a voice with ‘authority’ has ‘proven’ the wrongdoing of America generally, and OrangeManBad, specifically. With a group like that, do you think it would MATTER if it were true? Just look at their voting record.

As the guy who runs UN Watch observed… 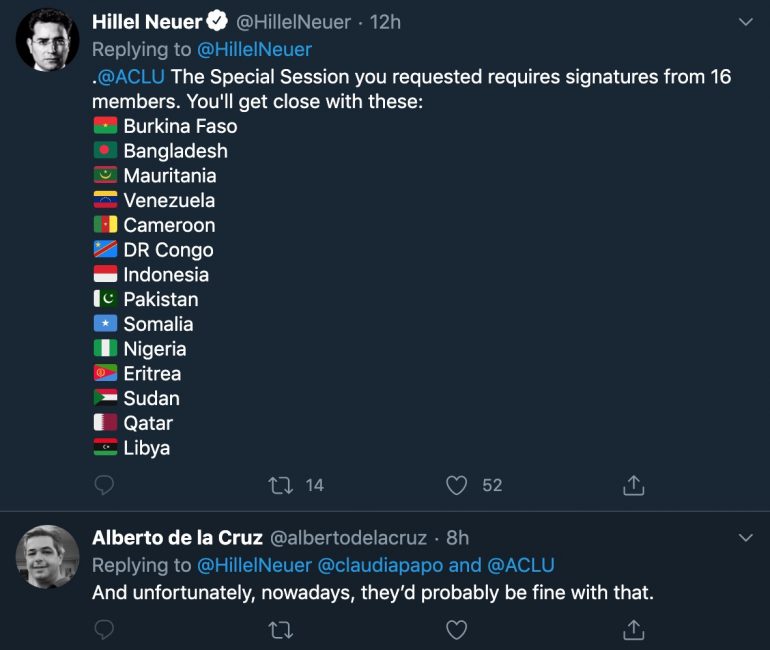 Sadly, we wouldn’t doubt it.