The Democrats have yapped incessantly about the Russian threat. Meanwhile, China has been quietly consolidating its power…

We have seen one institution after another caught in a web of Chinese intrigue. Not long ago, we saw University Department heads get caught working with China.

Now an internal review of National Instutute of Health — the guys we have relied on for our Chinese Coronavirus response — shows that a number of them were neatly tucked in the pocket of the Chinese Communist Party.

Do not mistake this as a benign business side deal on their part. China’s designs on us are anything but friendly.

The fresh round of terminations resulted from an ongoing investigation at the taxpayer-funded National Institutes of Health (NIH) into the failure of grant recipients to disclose financial ties to foreign governments.

The news was first broken by Science Mag, a project of the American Association for the Advancement of Science (AAAS), the world’s oldest and largest general science organization.

Originating in 2018, the investigation concluded with 54 researchers being “terminated or resigning” for violating NIH rules against simultaneously receiving funds from the U.S. government and foreign entities. —NationalPulse

A convenient graphic lays out the main categories of concern that were unearthed. 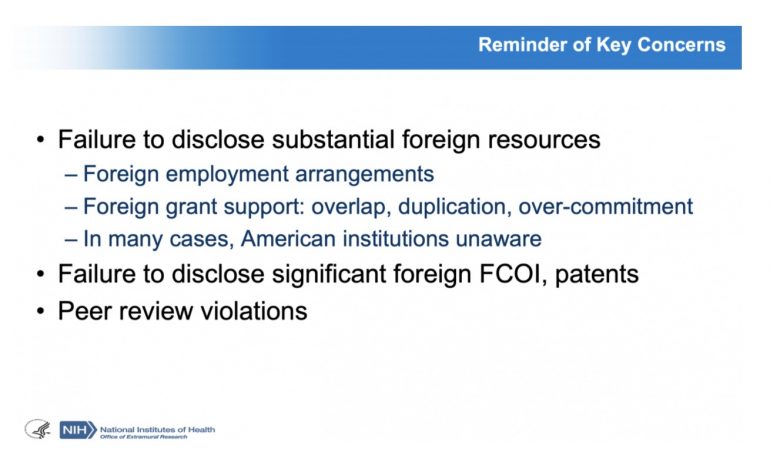 This was no Mickey-Mouse operation. It was sophisticated and had deep pockets.

A common theme, however, among the majority of these now-terminated researchers is the entity funding them: the Chinese Communist Party (CCP).

While 399 researchers were suspected of being on a foreign payroll, the NIH ultimately pursued 189 individuals. 93 percent of those involved in a documented foreign relationship listed China as the “country of foreign support.”

One hundred and seventy-five researchers in 27 states and 59 cities were targeted and the average foreign financial investment – either in the form of direct compensation or research grants – was $678,000. —NationalPulse

The tool being used against us is China’s Thousand Talents Plan.

The NIH report points to programs like the Thousand Talents Plan as the primary avenue whereby the CCP commandeers U.S.-based researchers, American taxpayer dollars, and weaponizes their findings for their own benefit.

Thousand Talent Plan members sign legally binding contracts with Chinese institutions, like universities and research institutions. The contracts can incentivize members to lie on [US] grant applications, set up ‘shadow labs’ in China … and, in some cases, transfer U.S. scientists’ hard-earned intellectual capital. Some of the contracts also contain nondisclosure provisions and require the Chinese government’s permission to terminate the agreement …. These provisions are in stark contrast to the U.S. research community’s basic norms, values, and principles. —NationalPulse

Back in 2016, one politician kept talking about China as our most significant threat and adversary. He said it so often he was mocked for it.

Opinions have very much changed since then, but has anyone bothered to acknowledge they were wrong… or even that he was right?

Parents SUE over their children being abducted by CPS due to investigator’s “hurt feelings”
May 17th, 2022 DC Clothesline