Anyone familiar with Orwell understands that it is a Totalitarian impulse that insists on the right to control the speech and expression of other people.

When a ‘controversial photo’ of a College Football coach wearing the T-shirt of an ‘upstart’ Right-of-Center news channel on a fishing trip, we got to see those totalitarian instincts out of the people and places whose very existence is tied to the First Amendment.

Oklahoma State's Chuba Hubbard, the nation's leading rusher last season, tweeted that he "won't be doing anything for Oklahoma State until things CHANGE" in response to a photo of coach Mike Gundy wearing an OAN T-shirt.

Yes, it’s petty and that’s something that will have to be worked out between the player and the coach. (Imagine thinking you are so important that you can dictate what your boss wears on his day off!)

But it was quite another for supposed ‘journalists’ to play fashion fascist. Bill Palmer of the Palmer Report unleashed his inner Stalin.

One of the more unhinged rants you'll ever read from a large, verified account on this website. Really something to behold. @PalmerReport pic.twitter.com/ginZZQdWRM

Here’s the screen capture arranged so you can read it. 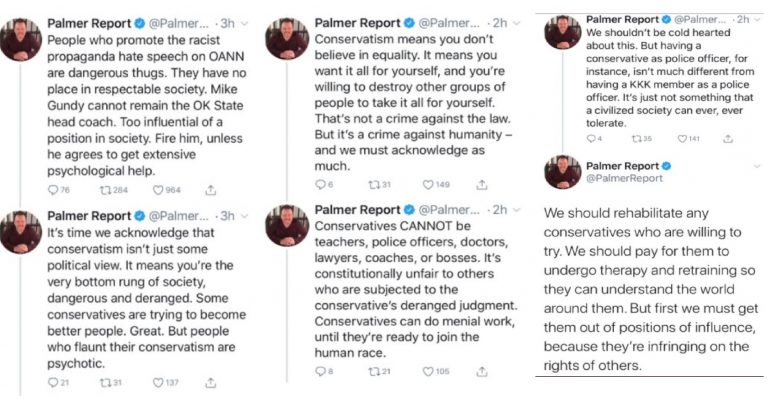 Politico’s Tim Alberta was no better. He had an opinion on whether it was ‘acceptable’ for him to wear the ‘wrong’ Tshirt on a fishing trip on his day off. 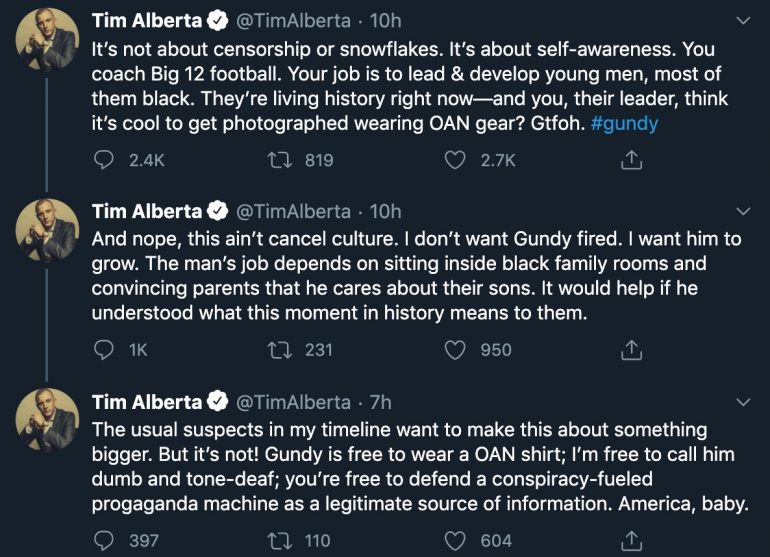 Why thank you Mr Thought Police. How nice to know a journalist doubles as a modern McCarthyite who has nominated himself the arbiter of which ideas and associations are acceptable, and which ones are ‘insensitive’.

Your entire career hinges upon the First Amendment. And you presume to set yourself above someone else?

It’s bad enough that Politico LARPs as ‘fact-checkers’, but now they want to play Fashion Police, too? You might want to dial back your authoritarian streak.

We haven’t forgotten what kind of a biased rag you write for, Tim. What’s that old saw about ‘glass houses’?