Now that we’re having a national conversation about race relations in the United States–and globally, for that matter–the woke leftists are trying to outdo themselves with their virtue signaling by finding things suddenly “problematic.”

After being publicly shamed in a Los Angeles Times opinion piece by John Ridley, the Oscar-winning screenwriter who wrote 12 Years A Slave, the online movie streaming service, HBO Max, has decided that the classic film, Gone With The Wind is one of those artifacts from a by-gone era that should no longer be acceptable because it glamorizes the Antebellum South, romanticizes slavery, and portrays African Americans in stereotypical ways. HBO Max has, therefore, pulled the multiple Academy Award-winning film from its catalog temporarily until it can provide proper historical context.

This censorship of movies is a slippery slope.

Few people in 2020 can watch Gone With The Wind and not cringe at the way that African Americans are portrayed in the film. That said, Megyn Kelly asks what about all of the other “problematic” portrayals of other groups in films? Do we get rid of all movies that portray women as sex objects?

Megyn Kelly is slamming HBO Max for temporarily pulling the classic film Gone with the Wind following criticism that it romanticizes slavery, saying ‘Where does this end?’

‘Are we going to pull all of the movies in which women are treated as sex objects too? Guess how many films we’ll have left? Where does this end?’ she tweeted Wednesday.

The journalist sarcastically argued that if movie giants and streaming sites start to pull down controversial shows and films that means hits like Friends, Game of Thrones, and Law and Order must be taken down too.

Are we going to pull all of the movies in which women are treated as sex objects too? Guess how many films we’ll have left?Where does this end?? https://t.co/Bh8mqpv0l3

Ok @hbomax – let’s do this – every episode of “Friends” needs to go right now. If not, you hate women (& LGBTQ ppl,
who also don’t fare well on “Friends”). Obviously Game of Thrones has to go right now. Anything by John Hughes … Woody Allen… could go on & on… & on…& on… https://t.co/dVXWssnFKF

The entire career of some directors would be erased if you get rid of movies with “problematic” depictions.

Totally. Forgot those guys. Let’s keep it going until all we have left is The Queen and Captain America. https://t.co/KNibMQXhEv

Kelly forgot John Hughes, who wrote and directed some of the most well-loved teen comedies in the 1980s. The veritable teen classics, The Breakfast Club, Ferris Bueller’s Day Off, 16 Candles, Pretty In Pink, and a whole host of other great movies. Hughes was called out by one of the stars he made famous, Molly Ringwald, during the #MeToo purging of “problematic” movies.

Kelly is noting on Twitter that the great purge of “problematic” movies and television shows has already begun.

Police shows are now a problem because they portray the police in a positive light, apparently.

‘Live PD’ is consistently one of the highest rated shows on cable. But now it may go away bc even watching a police show is somehow offensive to some. (Secret option #2: if you don’t like it, don’t watch.) https://t.co/CKmlcoZxnN

And there it is… https://t.co/kWDztzPvcD

Those are the sort of reality-tv versions of cops, though. Gone With The Wind was a fictionalized look at the South during the Civil War, so clearly this means that fictionalized versions of policing are also “problematic” now, right?

Good point – Law & Order has to go too. Our Corporate Protectors must see how evil it is. https://t.co/yBNVL6Vcky

It turns out that she’s not wrong, but it’s even more ridiculous than she imagined.

There doesn’t seem to be a problem with Law & Order (yet) but a children’s show is now being criticized for the positive depiction of a “good cop” who happens to be a dog.

This is beyond parody. https://t.co/DMhEMWi3FL

Some say that this is “faux outrage” to rile up conservatives. 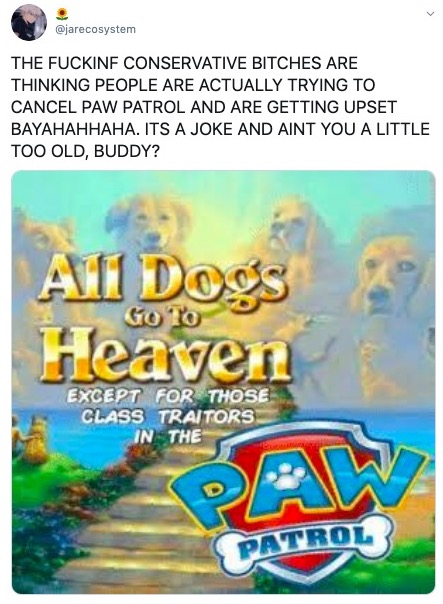 It’s really hard to tell with the censorious left.

There’s also a movement to “decolonize your bookshelf” which essentially calls for the purging of Western classics simply because they are Western classics. It’s as though owning a book is a tacit agreement to all the ideas in them, which is utterly ridiculous.

Kelly sums up her incredibly reasonable position in one tweet, “For the record, you can loathe bad cops, racism, sexism, bias against the LGBTQ community, and not censor historical movies, books, music and art that don’t portray those groups perfectly. Ppl understand art reflects life… as we evolve, so do our cultural touchstones.”

For the record, you can loathe bad cops, racism, sexism, bias against the LGBTQ community, and not censor historical movies, books, music and art that don’t portray those groups perfectly. Ppl understand art reflects life… as we evolve, so do our cultural touchstones.

She’s right. We need to see where we were and how far we have become.

This is why watching Gone With The Wind is so uncomfortable to watch now. It’s the same with Breakfast At Tiffany’s and scores of other classic movies. Millennials are absolutely shocked at the anti-LGBT and lack of diversity in the long-running NBC sitcom Friends and wondered how that could have been on television so recently.

Sometimes, our contemporary cultural tunnel-vision can keep us from recognizing some great truth that is sometimes portrayed in uncomfortable ways.