Is Talcum X really intent on turning the mobs out to attack Churches? Or is just this a desperate ploy to regain the credibility he lost within the BLM movement?

Shaun King was once a heavy hitter in the BLM movement. A pretty slick trick for a white guy whose only shot at NOT being ‘just another white guy’ hinges upon his theory that mom cheated on dad with a black guy on the sly.

He threw Democrats under the bus a few weeks ago: Shaun King Had A Rare Moment Of Political Clarity — But The Left Ignored It Because he’s not a DEMOCRAT, so much as a Marxist Leftist.

Only a year ago, he was celebrating the Antifa Attack on the ICE center that left one guy dead. Hey CNN: Your Buddy Shaun King Dubbed A Domestic Terrorist ‘Martyr’ … Is That News?

This only serves to remind us that what he wrote about Jesus was not breaking character. It was a continuation of his Marxist instincts. While some preachers were calling for the public to dial back on the rhetoric, Shaun was doubling down. 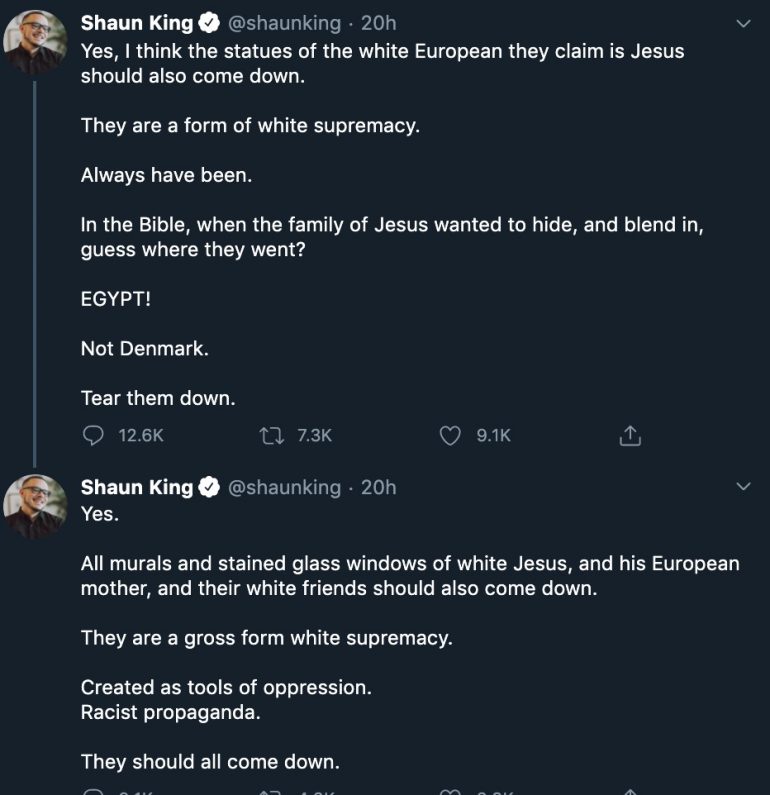 And when anyone objected to his call for the destruction of Christian art? He called that proof of them being bigots. Circular arguments are so very convenient. 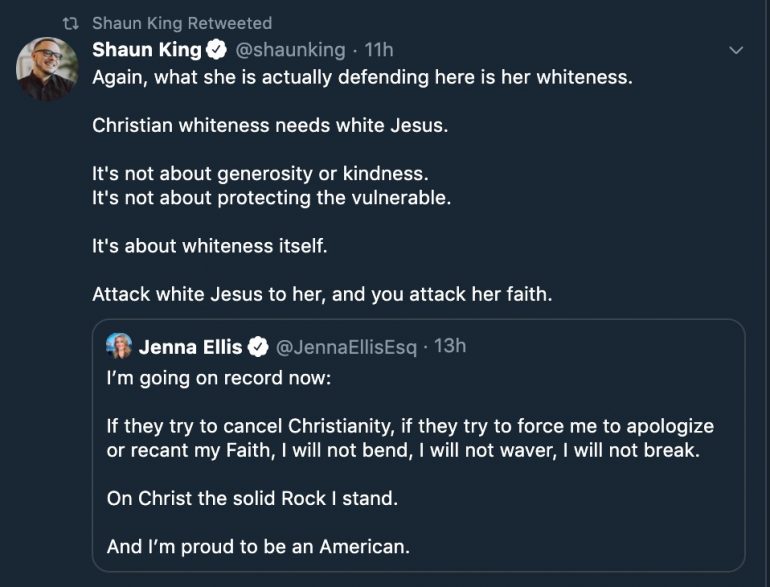 He thought he played some kind of a winning card when he posted this: 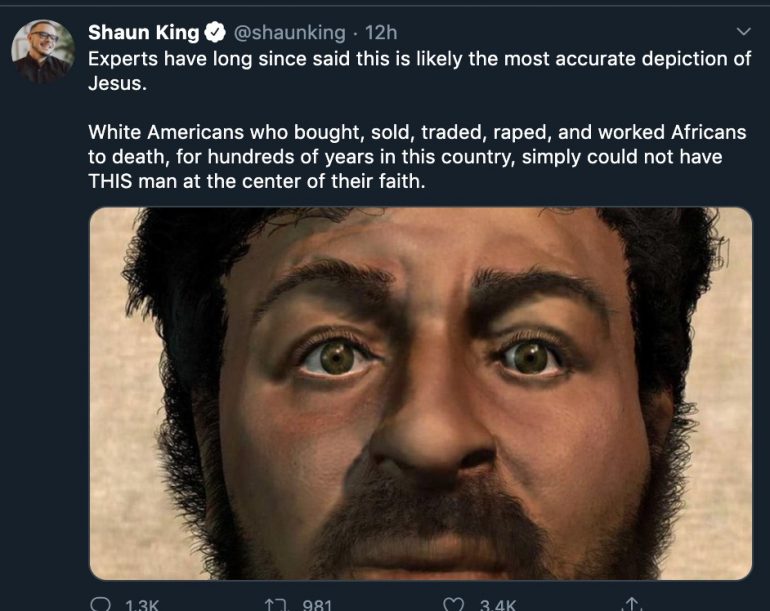 Yeah. So, he was Jewish. So what? For one thing, last I looked, your BLM crowd wasn’t especially welcoming to Jewish people, either. ClashDaily reported on the antisemitic attacks during this year’s BLM marches in California. For the other, white people KNOW Jesus is Jewish… and we don’t care. In fact, there’s an entire chapter in the Bible explaining that gentiles ought not to be haughty, because (gentiles) are outsiders, entering into a Jewish covenant by grace.

But Talcum X doesn’t know or care anything about that. He thinks he has us all figured out. 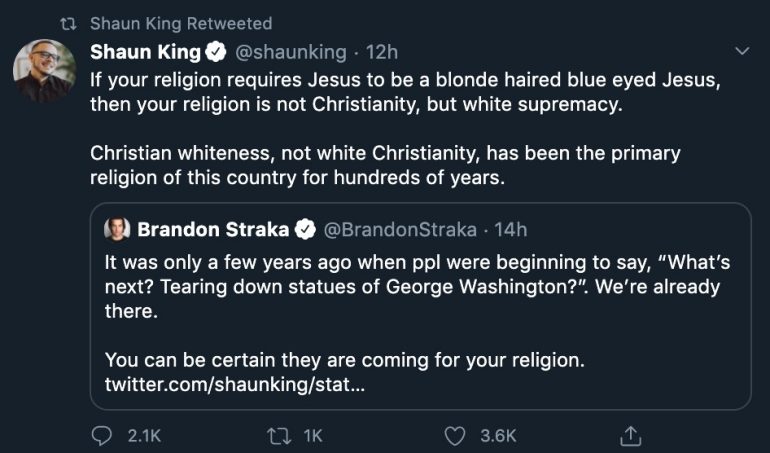 And he REALLY wants to be rid of it. 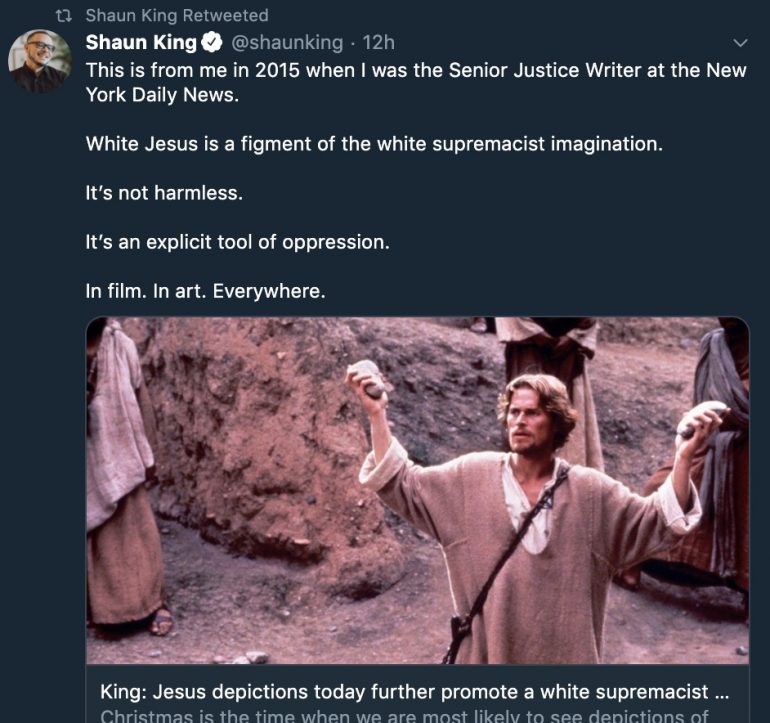 We could mention art — and even TV shows — that have reimagined Jesus as a Black man… and Shaun King’s lack of outrage at a Jewish man being wrongly portrayed as being of African heritage. But that’s missing the point almost as badly as he is.

The COLOR of Christ’s skin is irrelevant. Supposing, for argument’s sake’ he Returned one day looking Chinese or Korean, not a single believer would say ‘that’s it… I’m out’.

But as bad as his religious ideas are, his political ones could get people hurt or even killed. He — a white guy posing as a black guy — is declaring open season on religious art.

Some of the darker moments in our history involved white bigots burning black churches. Now he seems to be openly encouraging people — in the name of racial equality — to strike out at white ones.

This is a bad idea. But why would he worry? He can send some other poor sucker to do his bidding; to risk injury or arrest on Talcum X’s behalf.

Check out ClashRadio for wit and wisdom from ClashDaily’s Big Dawg. While you’re at it, here’s his latest book: