Have you seen any mainstream headlines denouncing the targeting of Jewish buildings and businesses?

Democrats are quick to trot out the word ‘antisemitism’ if they think they can hang it around the neck of a conservative. But let someone on THEIR side of an issue show signs of it, and it quickly falls out of their vocabulary.

But while anarchists were allegedly tearing up cities ‘in solidarity’ with a man unjustly killed by a cop (George Floyd), they were revealing their true faces with the crimes they were committing along the way.

Not only were they robbing neighborhoods blind with opportunistic looting and destructive mayhem, but they were also showing their true feelings with the graffiti they left behind. 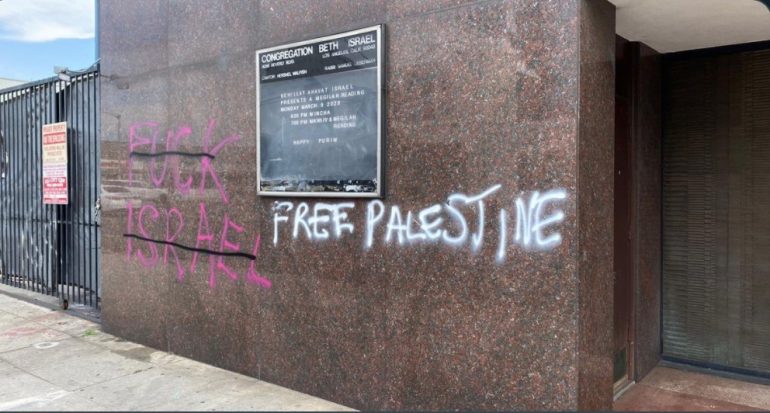 It’s the stuff of hate crimes.

“The attack on our community last night was vicious and criminal. Fairfax is the center of the oldest Jewish community in Los Angeles,” Koretz said in a statement. “As we watched the fires and looting, what didn’t get covered were the anti-Semitic hate crimes and incidents.”

Congregation Beth El was vandalized with graffiti stating “free Palestine” and “f— Israel.” The Baba Sale Congregation, in the same area, was spray painted during the protests.

Local Jewish businesses were also looted. Syd’s Pharmacy, which is Jewish-owned and had a sign advertising “Kosher Vitamins” in its front window, was robbed. The vandals broke the windows, knocked down the pharmacy shelves and stole drugs, including painkillers.

…“Under the guise of protest, some advanced their anti-Semitic agenda,” Koretz said. “Synagogues and Jewish institutions were graffitied with anti-Semitic slogans and vandalized.”

He also took issue with how the statue of Raoul Wallenberg, who saved thousands of Jews from the Nazi death camps, was graffitied. — Jewish Journal

Unfortunately for the Jewish people living in those neighborhoods, not all hate crimes are treated equally. These are the ‘woke’ kind of hate crimes, blaming Jews for crimes against Israel’s neighbors. So the rhetoric is just dismissed as ‘protest’ in support of a cause. It isn’t seen as racial animosity.

It’s the same thing we’ll hear from The Squad in the Democrats, which Pelosi stopped short of denouncing when Ilhan Omar, Rashida Tlaib and even AOC were called out for their anti-Jewish sentiments. See: Raucous Caucus: Pelosi Storms Out Of Closed-Door Meeting Over Omar’s Anti-Semitism

Unfortunately, Fordham Law, my alma mater, has a human rights center that produces anti-Israel stuff dating back to the days when I was a student. One of the "alumni" of this project was just arrested for attempted murder of police officers in Brooklyn. pic.twitter.com/KF9LTvSdWp

“Terrible antisemitic attacks against the Jewish community in LA using the #GeorgeFloydProtests as a cover. #BlackLivesMatter #laprotest.”
He added in our interview, those generally seeking to defame Israel and the Jewish faith “hide behind the liberal causes,” seizing on an opportunity to spread hate while police were distracted with riots and protests.

“They are the ones that always go after us; they’ve allied themselves with liberal causes,” Rabbi Burg lamented. —NewsMax

This is what @BilldeBlasio had the NYPD do today while thugs were planning another night of violence.

In this video shot earlier today you can see police officers chasing Jewish mothers & children out of a park. pic.twitter.com/wbymQ2Aep8

VIDEO: Roadways in Brooklyn are blocked by protests, yet a few blocks alway in Williamsburg an @NYPDnews Loser is jumping over a gate to send out Hasidic children from a park. @NYCPBA this is on your rank and file; not only on BDB. @SBANYPD Do your members condone this? pic.twitter.com/ulFZF0VqUe

And we all know how those ‘protests’ in NYC went, don’t we?

Does this not seem like it was written as a criticism of the Jewish people in this clip?