He was, in every sense, one of the good guys. But the rioters don’t give a damn. They have one priority. They are here to destroy, and nothing more.

Can we all stop pretending this is all being done in the name of some higher ideal? It’s not. This is the rage of angry young people who have nothing better to do or live for at the moment than to form a mob and vent their wrath upon whatever happens to cross their path.

Rioters in D.C. saw that LaFayette was too secure to strike out at, so they ran roughshod through the streets, seeking a softer target. They found one. 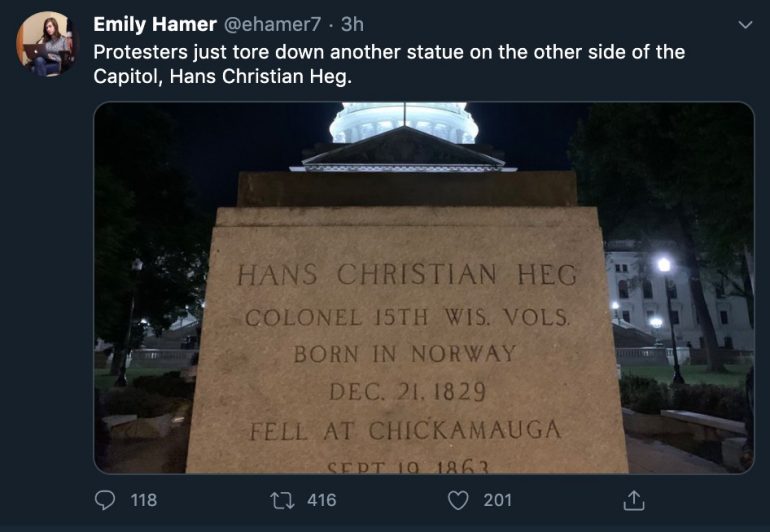 Hans Christian Heg. Born in Norway, fell at Chickamauga in 1863. Dude was in his early 30’s when he died.

Like any Hollywood Mob, the ‘get him!’ instinct took over. They grabbed it off the pedestal.

They dragged it, unceremoniously, down the street.

Only to eventually toss it into the drink.

That same crowd smashed some windows, smashed the windows out of a car, and gave the owner a beat-down when he tried to challenge the criminal who attacked him.

Who was the guy depicted by the statue they hated so badly?

Here are a few highlights from a biography:

Heg’s parents immigrated to Wisconsin in 1840, settling in Racine County. In 1849 Heg went to California for two years, seeking gold. After his return, he spent the next decade farming. In 1859 he was elected state prison commissioner, and was reelected two years later. Upon the outbreak of the Civil War, he raised the 15th Wisconsin Volunteer Infantry, which was nicknamed the Scandinavian Regiment.

The 15th trained at Camp Randall in the winter of 1861, then departed for St. Louis on March 8, 1862. The 15th fought at Island No. 10 and Perryville, then Stone’s River, where the regiment lost 15 killed, 70 wounded, and 53 missing. Heg, whose men saved part of the army by holding their ground during the battle, was commended by his commanding officer as the “bravest of the brave.”

…Heg and his men arrived on the right of the Union line around noon on September 19, 1863. After advancing a short way they were met with a volley from Rebels concealed in heavy woods. They held their ground, “cheered on by the gallant Colonel Heg, who was everywhere present, careless of danger.” Several times they were forced to fall back, then reformed and advanced. Then between 4 and 5 p.m. Hood’s Texans attacked, and his six Confederate bridades overwhelmed the Union three. Heg was mortally wounded in the attack; 696 of the 1,218 of his men who had gone into battle were killed, wounded or missing, a casualty rate of more than 50%. —

…Only 320 of the 960 men in the Scandinavian Regiment survived the war.

The statue to honor him was paid for by private donations raised by ordinary citizens who wanted to honor his memory.

Considering what these idiots pretend to be fighting for, this guy is the LAST one they would want to strike out at. He enacted prision reform, served in an ANTI-Slave-catcher militia, and sheltered a federal fugitive who helped rescue an escaped slave.

According to his Wiki entry…

Heg became a rising young politician who found slavery abhorrent. He naturally became an ardent member of the Free Soil Party. Heg was a major in the 4th Wisconsin Militia and served as Wisconsin State Prison Commissioner. He was the first Norwegian-born candidate elected statewide in Wisconsin.

He soon joined the recently formed Republican Party. He was an outspoken anti-slavery activist and a leader of Wisconsin’s Wide Awakes, an anti-slave catcher militia. During this time, he sheltered Sherman Booth, who was made a federal fugitive after inciting a mob to rescue an escaped slave.

In 1860, Heg was elected commissioner of the state prison in Waupun, and served there for two years. Heg spearheaded many reforms to the prison, believing that prisons should be used to “reclaim the wandering and save the lost.”

He was a man of real courage and virtue, who paid the highest possible price to help liberate slaves. His sacrifice was scorned and jeered at by people who know only vice.

Mocked by some of the very people whose own freedom came at the price of him (and so very many others) bleeding the ground red.

And to think that some mental midget thought they were sending a message by scrawling ‘black is beautiful’ on the remains of his monument.

He saw their humanity as something worth fighting and dying for.

How ironic that they are unable to recognize his humanity in return… and isn’t that what’s really at the root of these ‘demonstrations’?