We remember who ELSE joined her in backing Bernie… and they weren’t shy about political violence, either.

AOC’s ‘defund the police’ position seems a lot more suspect when it’s clear she’s thrown in with people like this. Not that her commitment to the militant left was ever in doubt. We’ve been talking about her and her Democratic Socialist views from the get-go. Here’s one of our articles that outlines those beliefs.

She has cheered those who rose up against ICE, has cheered Antifa, and even offered to help arrange bail for Antifa after an event last September.

It’s in her nature. 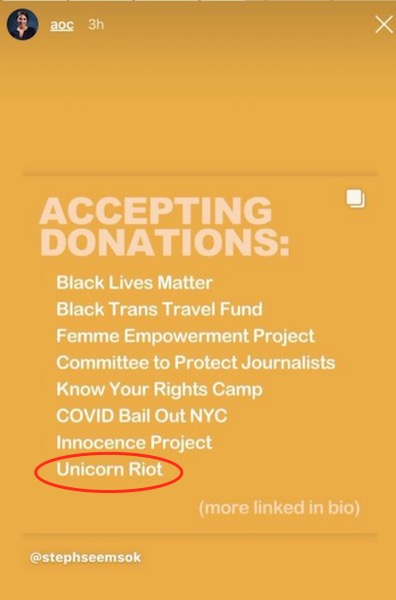 Why is AOC raising money for anti-government radical extremists? Unicorn Riot is straight up Antifa. pic.twitter.com/gGZz5HwfCA

Unicorn Riot is a registered nonprofit that purports to be alternative media, but runs pro-Antifa and anti-law enforcement content on a regular basis. They have recently been praised in the New Yorker for their “extremely compelling view” of the recent protests and riots.

We should probably ask her opinion about Soviet Gulags, since a number of her far-left fellow travelers and BernieBros are absolutely enchanted by them.

Hey Bernie: Why Does Your ‘Democratic Socialism’ Look So Much Like Lenin’s Communism?