Okay, now that I have your attention with the title, please consider what might be the reason to even ask such a question. First off, though, I want to say that I personally don’t want to harm anyone, let alone feel the need to take a life. Even before I became a Christian, I was always a sort of live-and-let-live person. You live your life and I’ll live mine. If we have common ground fine. If not, just let each other be. Why is that even hard to understand?

Back to the question. Because the Dems/liberals/socialists/progressives (whatever…) have done nothing to stop all the recent violence, more and more American citizens might have to face the reality of that question being forced upon them…all because of the Democrats. All because they still can’t get over the fact that they lost an election.

Major American cities look like third world war zones now. Portland, OR Mayor Ted Wheeler has allowed violence to go on for weeks. He even tried to join the mob.

Seattle Mayor Jenny Durkin allowed a part of her city to be technically ceded from America. She only decided to put a stop to it when the rioters threatened her own home.

This same inaction was the same with Atlants’s Mayor Keisa Lance Bottoms, Minneapolis Mayor Jacob Frey, and Chicago’s Lori Lightfoot. They’ve done little or nothing to stop violence, destruction, and even death.

NYC’s Mayor Comrade Bill de Blasio is a special piece of work. He took one billion dollars from the police budget and completely ignored all the riots and destruction.

The one commonality here is that all these “leaders” are Democrats. They’re certainly not the only ones, probably the most egregious when it comes to complete dereliction of duty.

No Democratic leadership at any level has come forward to denounce this violence. Most are of course blaming President Trump and even saying that his use of Federal agents to stop the mob is nothing but a dress rehearsal for martial law. They are blaming the president and even the law itself for the problems they’ve failed to stop and in some cases even helped to create.

Calls to defund the police are no longer fringe lunatic rhetoric. This mindset is now nationwide and supported by Democrat leadership. So back to the question: could you kill, especially since they want you unprotected?

We’ve all seen the videos of random attacks on people just minding their business by BLM and Antifa. Most of this is in larger cities, but if they start coming to other parts of the country, as they’ve threatened to do, what can we do, especially without the police? So, is it murder to kill in order to protect yourself and your family?

Murder by definition is: “the crime of unlawfully killing a person, with malice aforethought.”(Merriam Webster’s Collegiate Dictionary)

Legally, there are different degrees and circumstances which make what is murder in the eyes of the law. (From Justia.com)

There are nuances in the laws of each state in regard to what constitutes 1st and 2nd-degree murder and manslaughter. The application thereof and the legal language often varies.

Biblically there are a lot of references in regard to murder. The Sixth Commandment is usually quoted as “Thou shalt not kill” as rendered in English translations. In the original Hebrew, “kill” is “lo tirah”,meaning shall not murder. The imperative of not to kill is in the context of murder or completely unlawful killing, resulting in what the ancient Hebrews called blood guilt, which is liability for shedding innocent blood and the belief that deeds have consequences. ( see Joel 3:21)

As a Christian, consider these verses:

Also check out these verses: Gen. 9:6; Prov. 6:16,17; Jereimiah 22:17; also the story of David and Goliath found in 1st Samuel 17 shows the meaning of killing for protection and survival as opposed to outright murder (v. 45-51 in particular)

Perhaps one of the best references works for anyone still on the fence concerning the question of what you can do to protect yourself is “A Time To Kill: The Myth of Christian Pacifism” by Greg Hopkins. Mr. Hopkins is an attorney and a firearms safety instructor. This book is loaded with scriptural references for any question a believer might have in regard to self-defense.

Mr. Hopkins stresses the importance of learning your state’s laws in regard to firearm ownership and usage. “Self-defense is an individual decision,” he says in the book. “A personal, moral and legal obligation to use power and knowledge responsibly.”

Consider this. According to brookings.edu, “Our estimates indicate that almost 3,000,000 more firearms have been sold since March than would have ordinarily been sold…half of that increase occurred in June alone.”

There’s a point where you can push people too far.Even the most humble, fair minded, peaceful person has a breaking point. The English found that out in the late 1700s. The French aristocracy a few years later. The Democrats have pushed the average American to that point now. People are exhausted, frustrated, angry and distrustful of many of our governors and other public officials. It’s not hard to envision what could happen next.

In closing, if it came down to it…could you kill?

Mike Adams
By now, most conservatives probably know that Prof. Mike Adams was found dead over the weekend by apparent suicide. He was Professor of Sociology and Criminology at UNC Wilmington. In all the news coverage I read on-line, he was called things like “homophobic, racist, anti-feminist, hateful, distasteful, etc., etc.”, but never once identified as a conservative. I started reading his columns in Townhall.com several years ago. They were always factual, well written, often acerbic but with an intellectual type of humor. I never met him, but did communicate with him a few times via email. His death is an example of what the cancel culture is ultimately capable of doing. I’m not sure why the death of someone I’ve never met bothers me like it does, but it should everybody. RIP, Professor.

Photos From Warsaw, IN
This is what a peaceful gathering of patriots looks like. Hard to tell from the camera angles, but there were close to 300 in attendance. There are tentative plans for another rally, perhaps in the first part of October. We’ll let you know. The big take-away here is that if we can do this with minimal planning, no financial backing and even minimal promotion, any American community can do it. Since President Trump’s famous rallies probably won’t happen, average Americans can organize their own. Give it a try. 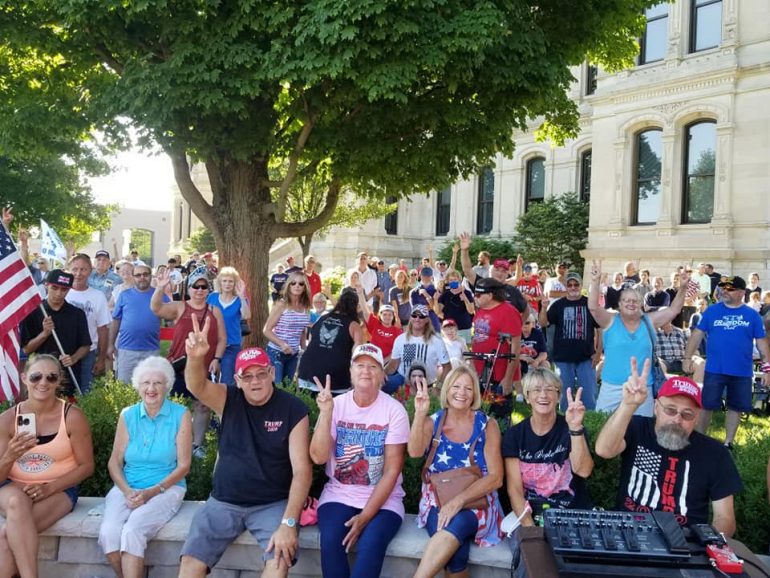 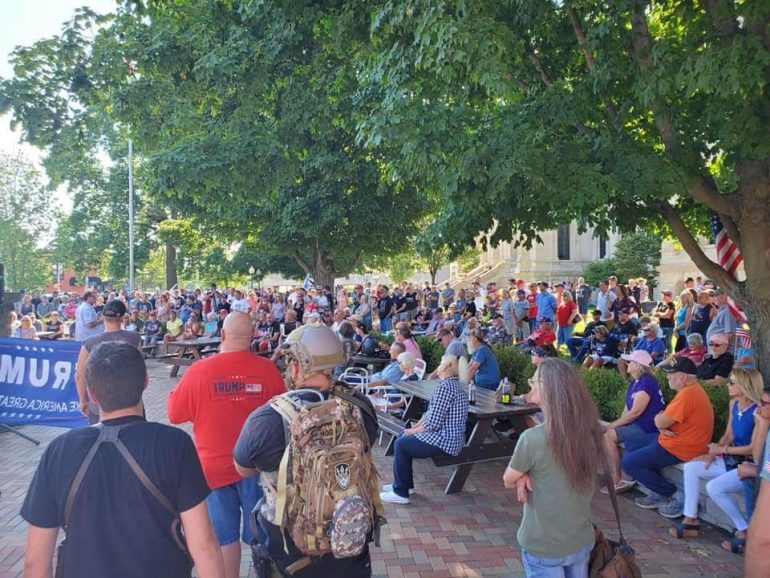 …And Now, Some Shameless Self-promotion
The first single from my next CD, which will be called “SALT 2: Trophy Hunting For Unicorns”, is now released digitally. This is a D45, which is like the old vinyl 45s with a song on each side. Only this is digital. The first release is “3 Nails”, backed with the instrumental “Bassic Blue”. “3 Nails” features vocals by Petra’s John Schlitt and guitar work by Greg Hough, Petra’s other original guitarist, along with drummer Curtis George and myself on 8 string bass. It’s out there on digital music platforms everywhere. There will be another D45 released soon, followed by the full CD afterwards. No confirmed release dates yet. We’ll keep you posted. Until then, please check out www.facebook.com/DeGroffProjects and RottweilerRecords.com. Thanks in advance for your support.