We live in an America that is so divided that federal agents are being compared to Nazi troops by the Speaker of the House of Representatives.

The chaos in Portland, Oregon has been going for more than 50 straight nights.

ClashDaily has covered some of the chaos here:

As journalist Andy Ngo who has been reporting the situation on the ground in Portland for the past seven weeks tweeted, “Every night they [Antifa] start fires, vandalize everything in the area & leave a mess. The city cleans in the morning & the cycle starts again at night.”

The mayor of Portland, Ted Wheeler, has done nothing to stop the nightly violence and destruction.

Antifa “protesters” tore down the statue of a freaking elk for crying out loud! They meet at the fountain where the elk used to stand every night and torch more things in that spot, including the couch of a homeless man.

Once they started targeting federal buildings, well, that was out of the hands of local authorities–much to their dismay.

But of course, Mayor Wheeler is now claiming that it’s the presence of the feds that are escalating a “tense situation.”

The President did not quell it, he escalated it. His heavy-handed tactics led to a serious injury and enflamed an already tense situation. https://t.co/V1lZeOLWD1

The situation is tense because the Mayor of Portland isn’t doing a damned thing to stop the city from being held hostage every freaking night by violent, destructive rioters. If he didn’t want the feds stepping in, all he had to do was protect his residents and enforce the law–but he can’t do that because he’s a leftist.

When Customs and Border Patrol agents went in to protect federal buildings, all hell broke loose.

The Media(D) said that President Trump sent in “secret police” forces to descend on the city. Multiple articles claiming that the CBP agents were unidentified and using unmarked vans and violating rights began to circulate. Ironically, these often included photos of the so-called “secret police” wearing camo uniforms clearly labeled “POLICE” on both the front and the back along with DHS (Department of Homeland Security) patches on their uniforms.

As for the unmarked vans, this is because when you conduct a covert operation, you don’t want to put up a big, neon sign and advertise where you are–especially since the police have been targeted by Antifa with frozen water bottles, cans of food, bricks, and more.

These are not the actions of a democratic republic.@DHSgov’s actions in Portland undermine its mission.

Trump & his stormtroopers must be stopped. 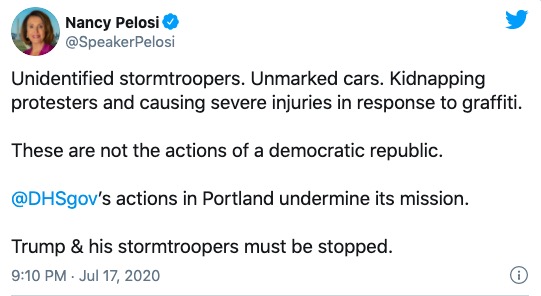 (After all, you never know if Pelosi will wake up one day, find her soul in the back of her closet, and realize that this tweet was outrageously offensive.)

And no, she wasn’t making a lame Star Wars reference, she was talking about Nazi Stormtroopers because restoring law and order in Portland clearly means that President Trump is Hitler, right?

But this is clearly an unabashed politics on the part of the Speaker of the House and it’s absolutely disgusting.

The Commissioner for Customs and Border Patrol, Mark Morgan, is fed up with the vilification of federal law enforcement officers. At a presser today, he called the disinformation spreading about CBP agents “disgusting” and said that it was “offensive” to refer to federal agents as stormtroopers.

Commissioner Morgan even brought a portion of the uniform for the slower members of the press that can’t seem to be able to find the large “POLICE” labels on the front and back of each agent. He also explained several of the identifying patches on the uniforms.

.@CBPMarkMorgan shuts down antifa lie that DHS officers are "unidentified." Every officer is identified clearly on the front, back & sides. They no longer display a name because of doxing that endangers their families. Instead, they wear an ID patch. https://t.co/OEk9nfCOHj pic.twitter.com/gVu3gBJclU

Somebody forward that to Speaker Pelosi–she seems a bit ignorant and is spreading false information.