In completely unrelated news, shootings in NYC are up 300% since last year.

At one point in June, NBC 4 published this headline:

According to official NYPD crime stats, there were 49 shootings in the city between July 7 and July 12, a near 277 percent increase on the 13 incidents which occurred in the same period in 2019.

The number of victims has also surged compared to last year. Between July 7 and July 12, there were 60 victims of shootings, up nearly 253 percent on the 17 during the same week last year.

The weekend’s violence occurred as the city previously confirmed that there were 205 shootings in June 2020, a 130 percent increase from the 89 which occurred in June 2019.

New York’s Mayor Bill de Blasio was thrilled to announce that, thanks to bail reform, there are “fewer people in our jails than any time since WWII and we are safer for it and better for it.”

DE BLASIO: “We now have fewer people in our jails than any time since WW2 and we are safer for it and better for it” pic.twitter.com/isOM3P8yZ4

How does taking offenders out of jail and putting them back on the street make the city safer?!

Also delusional is the Governor of New York, Andrew Cuomo, who insists that people are fleeing from other states to New York because it’s the “safe state.”

Gov. Andrew Cuomo: "We now have people coming to New York, fleeing the other states because it's the 'safe' state." pic.twitter.com/fLHqDwbe3P

He’s talking about the coronavirus where, as a result of his policies, the death toll in nursing homes reached more than 6500 individuals.

As Fox News meteorologist Janice Dean wrote in her op-ed in USA Today, “The death toll in our senior living facilities in New York alone was bigger than 9/11 and Hurricane Katrina combined. Where is the outrage?”

Instead, Governor Cuomo has been lauded by the partisan press and is so caught up with his own hype that he thought it was a great idea to create a commemorative poster for sale by the state of New York to remember his failure in leadership that caused a tsunami of deaths.

But now, the Governor is very concerned about the spread of the virus. He has expanded his travel advisory to include 31 states and requires self-quarantine for 14 days if New Yorkers travel return from any of them.

New York's travel advisory has been expanded to 31 states.

If you're traveling to NY from the following states you must self-quarantine for 14 days:

So, the Governor of New York is trying to show his concern for the health of New Yorkers after more than 400,000 confirmed cases of the virus and more than 33,000 people dead.

I’m old enough to remember that when Florida’s Governor Ron DeSantis imposed a 14-day self-quarantine from several states including New York and New Jersey back in March, he was criticized in the media for it.

Now that Governor Cuomo is doing the same, it’s a big “Meh” from the Media(D).

Here’s a flashback to March saying that a lockdown of New York state would be a terrible idea and probably illegal.

Let’s not forget that in May researchers concluded through genetic testing of the virus that outbreaks of COVID-19 in the rest of the country came from New York. 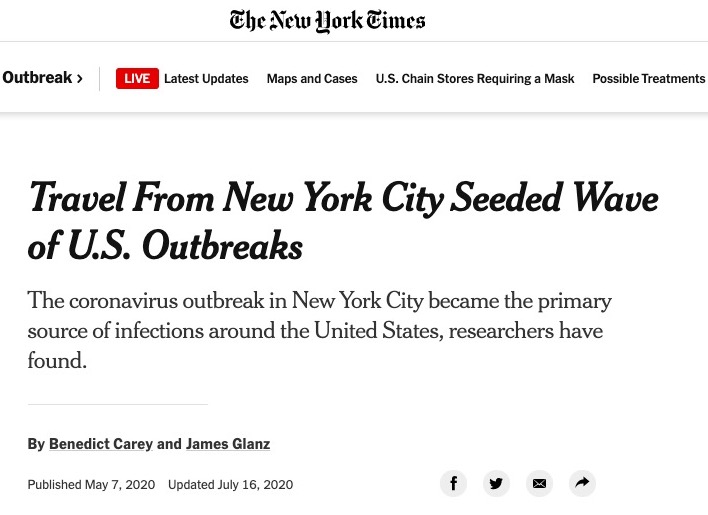 “We now have enough data to feel pretty confident that New York was the primary gateway for the rest of the country,” said Nathan Grubaugh, an epidemiologist at the Yale School of Public Health.

On Tuesday, the New York Times reported that there may be more cases of the virus than are being reported–antibody testing shows that the virus was spread more widely though they’re saying that we’re still far from herd immunity.

Nevertheless, the Governor of New York is concerned that the virus could spread back to New York from places where travel to New York caused outbreaks in other states.

He really believes that people from other states are heading in droves to New York to be “safe” as police are defunded, criminals are let out of jails, and violent crime is skyrocketing.