Historical slavery was a Bad Thing, right? Do we feel as strongly about the kind that’s happening now?

There was a time that even a whisper of the word ‘sweatshop’ sent companies running for cover. But now, companies stationed overseas are so enamored by their profit margins and access to the Chinese markets that they are much happier to denounce the remote historical slavery of the Antebellum South to prove their moral excellence if that means the public will quietly overlook what’s happening here and now in modern China.

How many of those Nike Millions that Kaepernick is cashing in on were made by honest-to-God slave labor? And how ironic would that be from voice of virtue himself, raking in those profits from a post-industrial version of the old plantations?

Here are some key excerpts from a detailed NYTimes piece outlining some of the sufferings the Chinese slave laborers are forced to endure.

Our visual investigation reveals that several Chinese companies are using Uighur labor from a contentious government program to produce P.P.E. during the pandemic. We track some of that equipment to the U.S. and around the world.

If you are one of the millions of people around the world wearing a face mask because of the coronavirus pandemic, this footage may concern you. It shows a group of Uighurs arriving at a textile company that started producing masks in response to the pandemic. The Uighurs are a long-persecuted, largely Muslim ethnic minority. This slickly produced video from Chinese state TV appears to show grateful workers getting ready for their new jobs. But behind this propaganda is a hidden story about a longstanding and highly controversial government labor program that experts say often puts people to work against their will. We reviewed hundreds of videos, photos, government documents and shipping data to reveal how the surging demand for face masks is linked to this problematic program. We identified several Chinese companies that use Uighur labor to produce P.P.E. And we tracked some of their shipments to consumers in the U.S. and around the world. “The rural poor that are being put into factory work are not going by choice. There are these coercive quotas that cause people to be put into factory work when they don’t want to be. And that could be considered forced labor under international law.” This is all driven by supply and demand.

Chinese companies have been rushing to produce masks as the pandemic spread across China and the rest of the world. In Xinjiang, where a majority of Uighurs live, only four companies produced medical-grade protective equipment before the pandemic. Now, that number is 51. We found that at least 17 of those participate in the labor transfer program. “Any company that is procuring masks or other personal protective equipment that wants to avoid forced labor content in those products should not be sourcing them from Xinjiang.”

…We are first going to look at a company called Hubei Haixin. It uses Uighur workers from the labor transfer program. Its factory is located here, almost 2,000 miles away from Hotan, where the Uighur workers were transferred from. We tracked one of Hubei Haixin’s face mask shipments from its port of departure in Shanghai to the United States. It arrived at the port of Los Angeles in late May. Then, the shipment was received by MedWay US, a medical supply company in Suwanee, Ga. Although MedWay US wouldn’t respond to questions from The Times about the origins of their products, we can see they do sell face masks online. Protective gear made by Hubei Haixin is also readily available to U.S. consumers on popular online shopping websites. Images of the Uighurs’ living conditions at the Hubei Haixin factory, proudly broadcast on state media, help explain why the labor transfer program is so controversial. They are required to attend a weekly national flag-raising ceremony to pledge loyalty to China. They also must learn to speak Mandarin. This form of political indoctrination is common, and we see it in even greater detail at another exporting company we identified.
… In satellite imagery, we can clearly see their segregated living quarters. They have an assigned area on the factory grounds. They’re surrounded by government indoctrination and take mandatory Mandarin language classes three times a week. In the government’s view, fluency in Mandarin and skills in factory work are key to assimilating to Chinese society. It’s unclear how many masks Medwell sends abroad.

…Over one million Uighurs and mostly Muslim minorities have been detained in recent years, some simply for their religious practice. The Chinese Communist Party says its tight control over Xinjiang is necessary to fight what it says is religious extremism. It’s virtually impossible to know who in the transfer program was forced to participate. Speaking out is incredibly risky. And the government is shaping the narrative.

…Earlier this year, an Australian think tank identified 83 major international brands whose supply chains were connected to the Uighur labor transfers, including Nike and Apple.

The situation has become so troubling that the U.S. government in July 2020 warned U.S. companies of the risk of forced labor from Xinjiang. And U.S. lawmakers introduced a bipartisan bill to restrict imports from the region. “It’s injected forced labor into American and global supply chains.” “We know that many U.S., international and Chinese companies are complicit in the exploitation of forced labor.” But despite the concern, we found that protective gear from problematic supply chains is continuing to make its way into the U.S. and around the world. “Hey, it’s Haley here, one of the reporters on this video. Our team spent months investigating companies in China that use Uighur labor to produce P.P.E., but we only realized how widespread the issue really is when we tracked a shipment of face masks from one of those companies to the U.S. If you want to see more work like this, let us know what we should investigate next, and don’t forget to subscribe for more Visual Investigations.”

In a day and age when everyone and their dog is comparing Trump to Hitler, let us ask a question in reply.

Have you seen this gate before? 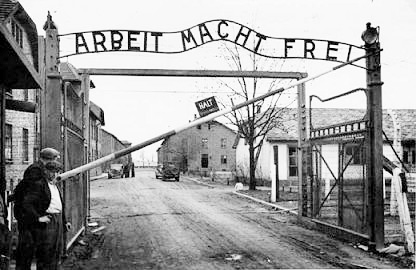 The words, while not in English, translate into ‘Work Makes One Free’.

How would you feel if the company making your sneakers had its workers show up under a sign like that?

And a follow-up question: how likely is it that, sign or no, that’s effectively what is happening?

Will Kapernick give up his millions?

Will Nike cut China out of their supply chain?