There seems to be a serious misunderstanding here between dysfunctional current realities in Democrat-run centers of urban blight and the broader human experience.

It wasn’t so long ago that even such enormously ‘right-wing’ figures as one Barack Obama were encouraging people in areas of urban blight to break a cycle of fatherlessness and poverty.

His message, now, is considered ‘racist’. An example of ‘whiteness’.

Embracing personal responsibility and a strong work ethic was, after all the ticket out of poverty for such figures as Dr. Ben Carson, Dr. Thomas Sowell, and Justice Clarence Thomas, for example.

But identitarian politics has now poisoned academia and culture to the point that they are sawing off the very branch they are sitting on.

Folks from the same political party that will scream at us for questioning the wisdom and authority of medical experts who keep contradicting their own advice during the ChinaVirus crisis are also telling us that the Scientific method itself is ‘whiteness’.

Here is the infographic the SMITHSONIAN is putting out as part of a loooong article scolding white people, and calling white folks ‘fragile’ for calling BS on this ‘whiteness’ theory: 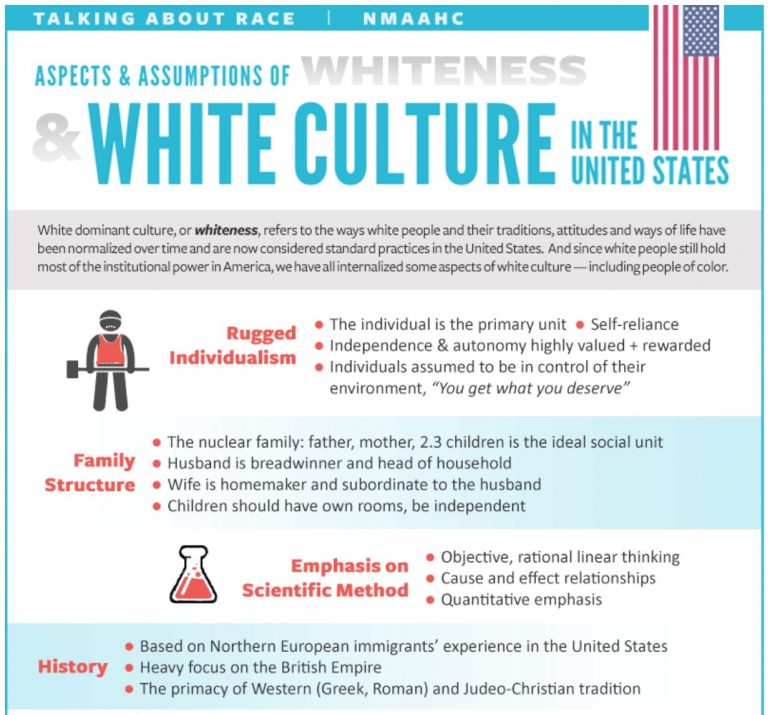 Let’s break down a few of the many obvious flaws in this infographic.

In the NBA alone, how many athletes owe their athletic success to exactly that blueprint? How many black multimillionaires and even a few billionaires owe it to their work ethic and self-reliance? Not being white was not an obstacle to them.

The nuclear family is by NO means a ‘western’ novelty. It exists in some form or fashion across the globe. Some cultures have multiple wives, true, but even they still function within one household. Distribution of work responsibilities among the family members is nothing new and can be traced all the way back to hunter-gatherer cultures. That’s hardly a feature of ‘whiteness’. As for family size, try telling a Catholic, Mormon or some Reformed families (for example) that ideal families are 2.3. They will laugh in your face. Such numbers will vary widely based upon urban/rural and religious/irreligious lines.

Race is absolutely a nonsequitur here.

History? Absolutely. We DID borrow our history. We cribbed notes from a successful blueprint that built Greece. One that built Rome. One that rebuilt Europe after Rome collapsed. One that built America. It was the ideas, not the ethnicity of the people using them that mattered. Or are they seriously calling Hong Kong — who built great success on the same blueprint — ‘white’? 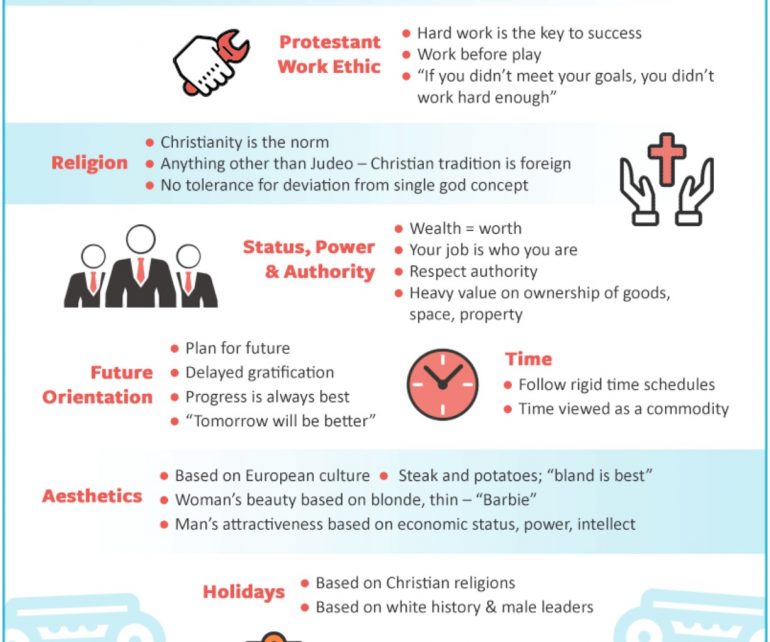 We embrace Christianity, not for some ethnopolitical reason, but for the same reason so many people in North Africa have been embracing it… because we believe it is true. (Just like a rapidly-increasing number of Africans have.)

We challenge contrary beliefs we believe to be untrue, but that is hardly the same as, say some Muslim countries executing anyone renouncing Islam, or China jailing dissenters who hold religious views offensive to the Communist Party. The Secular American Left apparently believes in NO god that rivals governmental power and is far more accurately described as having ‘no tolerance or deviation’ from their belief set.

Time? That change probably came with the switch from an agrarian culture to industrialization. If you want the benefits of American wealth and innovation you need to accept that package it came in.

Food: ‘Bland is best’? Do we have to remind you that the whole REASON that the Western Hemisphere was discovered by Europeans was that they were looking for an easier way to trade for SPICES after Constantinople fell to the Muslim conquerors?

One of my favorite stories from work was when I (a white guy) comfortably ate very spicy food that left my Nigerian coworker crying ‘uncle’. (You had better believe that I ribbed him over that.) 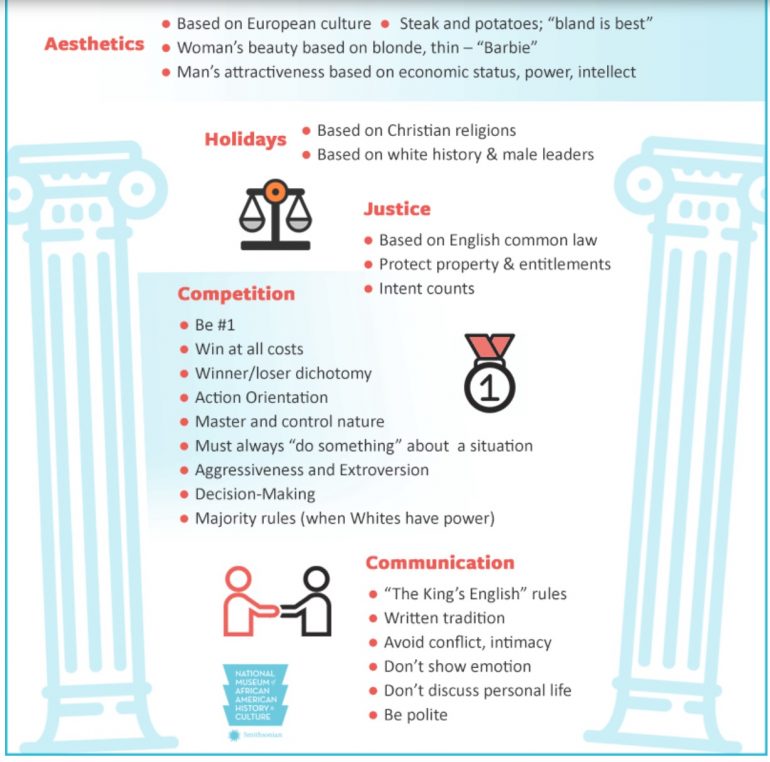 English Common law. YES! And a thousand times yes! It took more than a Millenium to perfect a system of jurisprudence that preserves the innocence and rights of the accused while holding even the greatest among us accountable to the same standard.  We still run into trouble when corrupt individuals exploit it, but as a whole, it works better than, say, a system of mob justice or presumed guilt.

Competition? Prove you really believe that by calling for pro sports to be canceled. Start with NBA and NFL and see how far you get there.

Be #1? Have you even SEEN how rappers flex?

This entire project was obviously written from a position of we don’t like your culture, so we will condemn it, without giving much thought to what to replace it with.

They are missing the most wonderful thing about America. The country really doesn’t care what color you are, or whether you were born here or somewhere else. Opportunities await anyone willing to apply certain universal principles.

“There is no other country on the planet where you or your parents can show up and with a lot of hard work create huge wealth within one generation,” said businessman Raul Fernandez, who was born in Washington to immigrant parents from Cuba and from Ecuador.

Six of the 42 richest immigrants on the Forbes list are from Israel, five are from India, and four each are from Hungary and Taiwan. Moscow native and Google co-founder Sergey Brin, whose parents brought him to the United States when he was six, leads the immigrant list with an estimated net worth of $37.5 billion. — WaPo 2016

Maybe this whole exercise of building an entire movement around melanin content was missing the point entirely. Maybe the American framework was intended as the distillation of best practices that can work for anyone who applies them. That the Framers actually understood that there were other religions in the world, and their rights were protected as well.

There are presently 35,000 millionaires in the USA. Could that number get a lot higher? Sure. But there are a lot of people of every background who never get there.

Maybe instead of complaining about how bad the country is, we can look at ways to help people leverage the system as it exists to reach their preferred goals — as so many immigrants have successfully done — rather than demanding the world conform to their demands.

But sitting around, complaining that your happiness is contingent on someone else’s behavior? That sounds like a prison that nobody should be forced to live in.