The world has lost an absolute titan when it comes to debating the pro-life position, advocating for free speech, and exposing the rot in our colleges and universities.

Criminology professor Mike S. Adams, 55, was set to retire from the University of North Carolina at Wilmington in just a few days, but he was found dead in his home when police did a wellness check on him. No cause of death has been released, but police are investigating.

Deputies with the New Hanover County Sheriff’s Office responded to the Wilmington home of Mike Adams to do a wellness check and found his body, according to Lieutenant J.J. Brewer. The Sheriff’s Office is conducting a death investigation at the house on Windsong Road, but did not release any other details about the circumstances.

Adams, a 55-year-old tenured criminology professor, was set to retire from UNCW on Aug. 1, after reaching a settlement agreement with the university for more than $500,000. He sparked controversy at the university for more than a decade, particularly and most recently surrounding his comments on social media, The News & Observer previously reported.

Adams was a thorn in the side of the leftists in academia and a breath of fresh air to Christians, conservatives, and especially pro-lifers.

He was called “controversial” for not walking lockstep with leftists and vocally pushing back against the wave of leftism sweeping through universities through his columns in conservative publications. Adams was a longtime columnist for Townhall and his abortion debate with Dr. Willie Parker should be watched by every pro-life advocate.

Adams won awards for his teaching and his students loved him–but there were many critics advocating for his removal from the university for years.

His byline graced this very website once upon a time. One of his most famous pieces was published right here on ClashDaily, as a matter of fact. His open letter to a fellow professor, An Embarrassment to Higher Education was cited by Rush Limbaugh and Glenn Beck then shared around the conservative alternate media.

Here is Rush reading Mike’s article back in 2013:

Adams was bold and sometimes the gentler, turn-the-other-cheek infinitely sort of Christians insisted that he went too far in his language, but his intention was to push the envelope and demand justice and equal treatment for everyone.

David French, the prominent conservative columnist, was also an attorney for Adams in a case against UNCW a few years ago. Adams contended that the university was violating the First Amendment by denying him a full professorship in 2006 due to his columns at Towhall. He won the case. Here are French’s thoughts on who Mike Adams was.

I disagreed with Mike, and I loved Mike. He could frustrate the heck out of me. I'll never forget condemning his worst statements right in front of him, speaking to the jury in closing arguments. But he was so much more than his tweets. /2

At the same time, there was pain he did not show. He suffered loss he did not discuss.

But he trusted Jesus. He relied on God's grace. Rest in peace, my friend.

Mike Adams started his career as a professor as an atheist and pro-choice, but his life was radically changed by Christ.

This may be why they hated him so much.

Townhall has a wonderful piece profiling the man who wrote for them for 20 years.

But the ghouls are also out in force celebrating his death from causes still unknown.

Even Buzzfeed had to dunk on him. 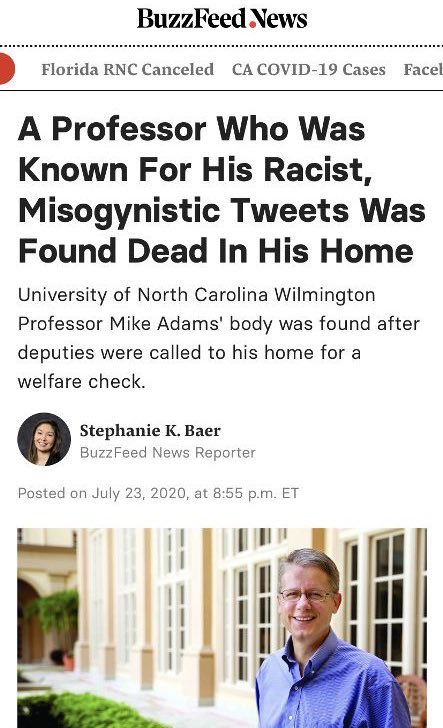 Now imagine how Buzzfeed would report the death of the author of the very racist and historically inaccurate 1619 Project. That would never happen.

Look, we’re no fan of RBG, and she’s been on the bench for far too long, but when it’s reported that she is struggling with her health as an octogenarian, we still wish her a speedy recovery.

This is one of Mike’s former colleagues from UNCW: 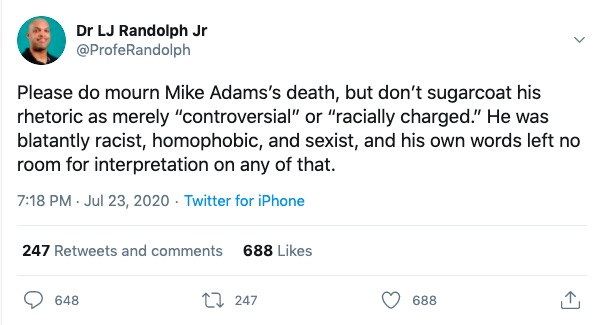 Others were more overt in their celebration of his death.

Adams posted a tweet that has been called racist and it was the target of the haters. This is just a small sample of the comments from the one tweet.

Maybe those six guys can be your pallbearers. 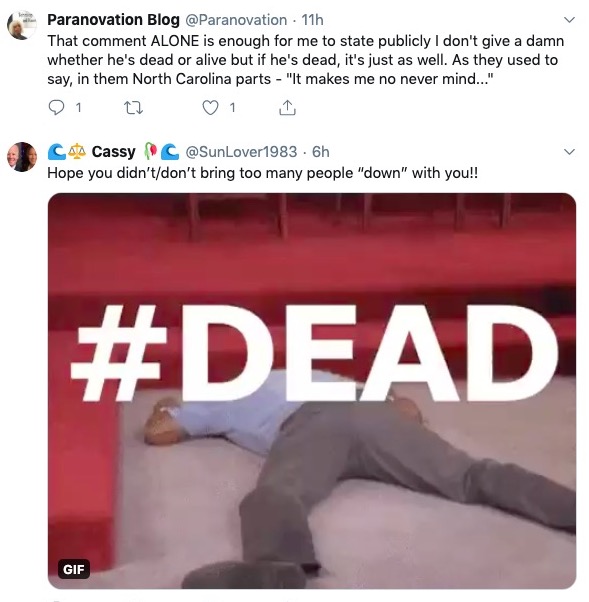 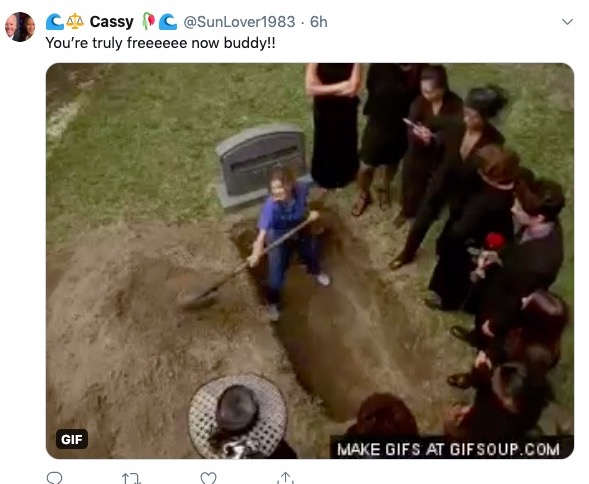 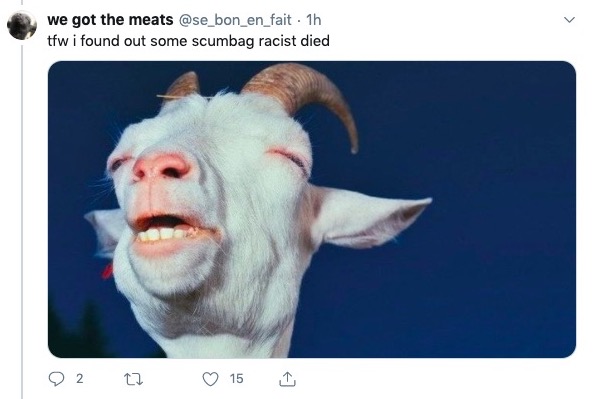 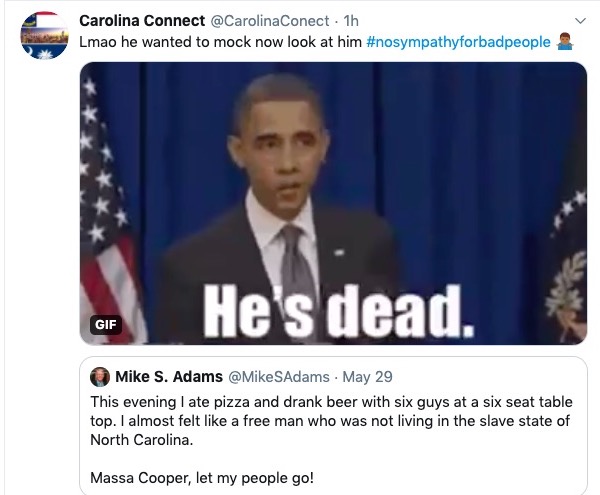 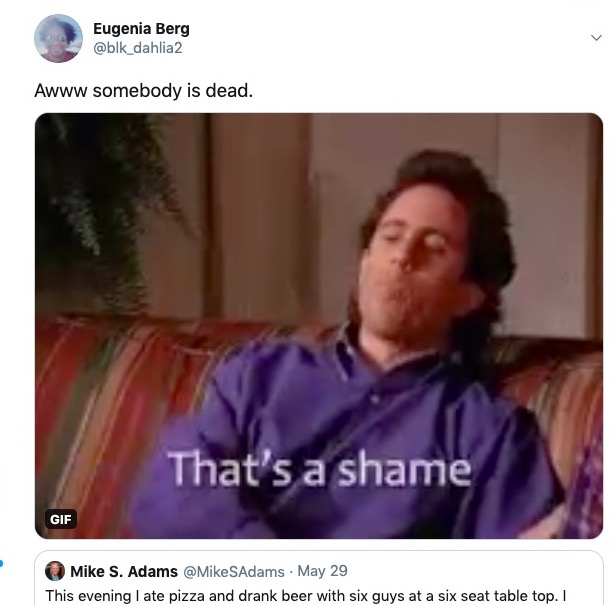 I had the distinct pleasure of meeting Professor Adams once about 15 years ago. He was delightful. He was also acerbic. Ten years later I still remember his article “I Hate The Wall Of Hate.” Adams would tackle any subject from feminism to 2A, and Cultural Marxism to abortion, his articles and books were a pleasure to read. He had a biting sense of humor and wielded his wit like a master swordsman would handle a custom-made blade. He was also just a really nice guy.

We have lost a great man despite what the haters say.

I hope you hear those longed-for words from our Savior, “Well done.” For your pro-life advocacy alone, they would be well-deserved in your case.