Yet again, it was those 4 liberals and the infamous John Roberts who ruled that Churches are less free to meet in Nevada than are casinos… even WITH social distancing protocols in place.

That’s right. They ruled that Churches are less free to meet while the Chinavirus Panic holds sway here than casinos are… no matter WHAT the First Amendment might have to say about it.

The Supreme Court on Friday rejected a Nevada church’s request to block the state’s cap on attendees for religious services amid the coronavirus pandemic.

The court voted 5 to 4 against the request, filed by Calvary Chapel Dayton Valley, with Chief Justice John Roberts siding with the liberal-leaning justices. The decision keeps in place a limit of 50 people in houses of worship due to the pandemic.

The church had argued the cap was an unfair attack on its First Amendment rights to free exercise of religion. It pointed out that the state allowed higher caps for restaurants and casinos — 50 percent capacity — but would not let its 90-person congregation assemble, even with social distancing protocols. A federal court upheld the state’s policy, and the church sought an appeal last month at the 9th Circuit. MSN

That was the view of Roberts and the rest of the Liberal judges. What about the other four?

Neil Gorsuch wrote the dissenting opinion in one blistering paragraph. 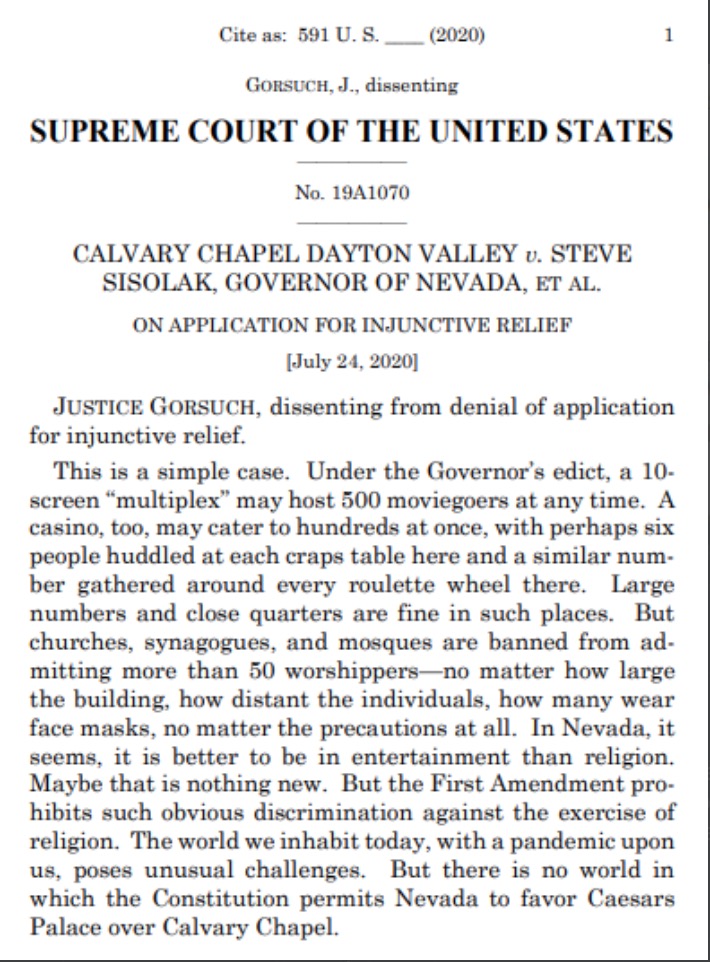 Senator Cruz, no stranger to the Supreme Court, had something to say about that:

John Roberts has abandoned his oath.

But, on the upside, maybe Nevada churches should set up craps tables? Then they could open? https://t.co/6pWoOwg9ts

The other dissenting opinions are worth looking up, too.

We would note that the Trump-appointed judges were on the side of Constitutional freedom of worship in this decision… and that whoever wins in November is almost certain to appoint a replacement for the ailing RBG at some point in his 4-year term, and perhaps more than one.

Of course, all of that becomes moot if the Liberals make good on their radical plan of stacking the courts, doesn’t it? Even FDR stopped short of doing that.