If he had a staffer that made a statement even mildly objectionable to any group in the Left’s intersectional hierarchy, they’d be run out on a rail. But against the police? Don’t hold your breath.

These are the same people who think Colin ‘Pig Socks‘ Kaepernick is some sort of a cultural icon, despite the Million$ he soaks up from companies heavily invested in China whose racist practices (including explicitly targeted mistreatment of black people) and human rights abuses have been well documented. (Was the labor that made those shoes even voluntary, or is Colin profiting off of slave labor?) But America is Racist, you see.

Biden ‘assures’ us that he won’t be pushing a defund the police agenda. But we’ve already seen policy shifts proving that he is easily pushed left by others in his party.

We also know that his party is teeming with open hostility toward the police. So what will he do now that he’s seen some anti-police contempt in his campaign? Anything at all, or does he quietly condone it the way Bernie quietly condoned the Bolsheviks running his campaign that were caught on video talking about revolutions, gulags for their political foes, and ‘chucking bricks’. (Look around, does any of that sound familiar?)

A supervising video producer for Joe Biden’s presidential campaign tweeted a meme in June that urged people to stop calling the police “pigs” — but only because unlike the police, pigs are “highly intelligent and empathetic animals who would never racially profile you.”

The videographer, Sara Pearl, also retweeted a user’s comment that while “pigs are sweet, intelligent and compassionate,” police officers are “monsters” who “don’t deserve to be called pigs.” 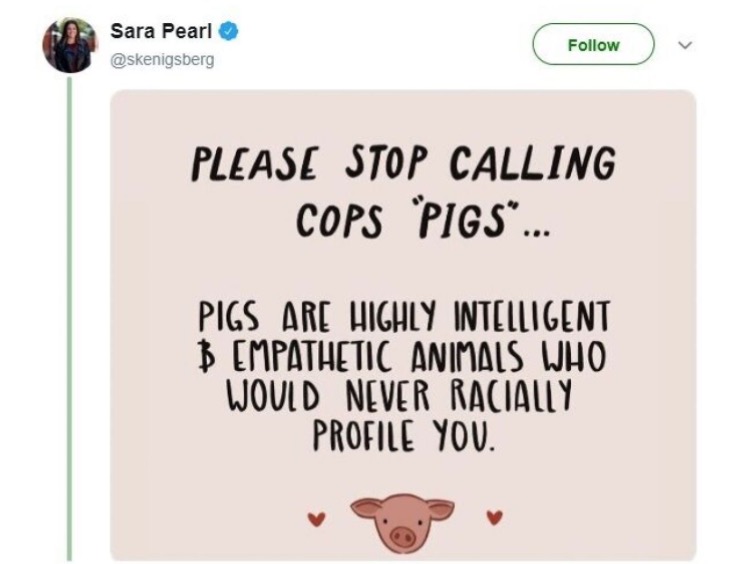 Now surely that’s just a one-off spun up by the rage she felt over the wrongful death of Mr. George Floyd, right?

Here she was after the murder of 5 cops, and wounding of 9 others, by a cop-hating, anti-white racist. These same cops, we might note, had just completed an escort to a lawful protest march at the time. Do you recall which protest? That’s right… it was a BLM march. And some of those cops were shielding civilians with their own bodies.

What clever and insightful thing did she have to say after that bloodbath?

Here’s the tweet, taking a swipe at the NRA’s offer of condolences to the fallen cops:

“Of course they respond to the officers but not to the previous shootings :(”

When Fox reached out for comment, none came. But the tweets were deleted.

‘When someone tells you who they are,’ the saying goes, ‘believe them.’

Should we expect an apology, or should every First Responder in the country know that all the platitudes of support the left have given them over the years weren’t a tinker’s damn.