A shotgun shell missed him by inches. Isn’t HIS life worth something? What about his girlfriend, or her kids that were present in the home they were terrorizing?

We’re told that these demonstrations have two key qualities.

First, they are most definitely peaceful.

Second, they are the great defenders of the value of black lives.

Keep those thoughts in mind as we relate what happened to Joseph Mensah, his girlfriend, and their kids. 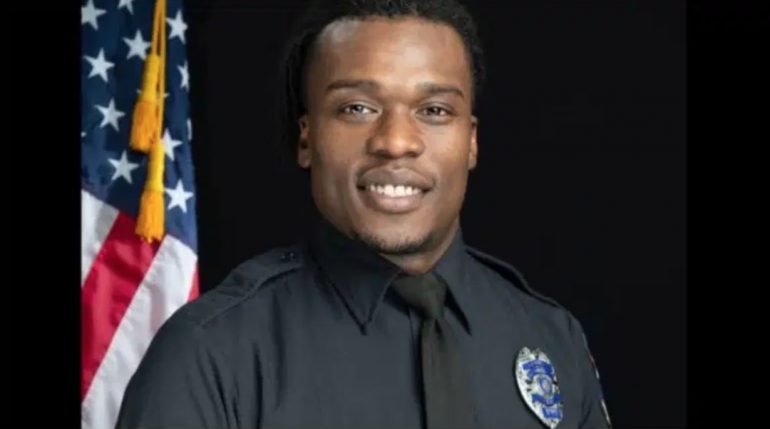 He is a police officer in a little place called Wauwatosa, Wisconsin. He happens to have been involved in three fatal on-duty shootings in the past 5 years.

In July, rapper Jayzee put a spotlight on this man and his service record.

Rapper Jay-Z has placed a full-page ad in the Milwaukee Journal Sentinel demanding that Wisconsin Police officer Joseph Mensah is fired and charged for his reported involvement in the shooting and death of three men in five years.

Joseph Mensah, of Wauwatosa (Milwaukee, Wisconsin) is currently under review by Milwaukee County District Attorney John Chisholm for an incident involving the death of Alvin Cole, 17, but is not being investigated for the deaths of Antonio Gonzales, 29, and Jay Anderson, 25, during police stops in Wauwatosa, Wisconsin.

The three separate incidents occurred “between 2015 and 2020. [Mensah] is under review for the most recent killing, of Cole, but the earlier two were deemed self-defense and he did not face charges,” the Guardian said.– Heavy

In response to the outcry, Mensa was suspended with pay while an investigation proceeded.

Wauwatosa council has called for his firing. (Normally such a demand would wait for the evidence of wrongdoing, first. That looks like a lawsuit waiting to happen.)

And what happened once the public outcry was whipped into a frenzy? He was publicly tagged as a Bad Man™. Of course, there are no fair hearings in the court of public opinion. Once someone decides to declare you guilty, you’re fair game for the mob.

In Mensah’s case, the mob was more than just digital.

Last night, protesters came to my girlfriend’s house while I was there, and tried to kill me. I was unarmed and tried to defend my property and the property of my girlfriend. We were both assaulted, punched, and ultimately shot at several times. A shotgun round missed me by inches. Not once did I ever swing back or reciprocate any the hate that was being directed at me. I am all for peaceful protests, even against me, but this was anything but peaceful. They threw toilet paper in her trees, broke her windows, and again, shot at both of us as they were trying to kill me. There are children that live there any the knew that. The irony in all of this is that they chanted Black Lives Matter the entire time, but had zero regard for any of the black children that live there or me, a black man.

Vaun Mayes, a prominent and controversial Black Lives Matter activist in Milwaukee, wrote Heavy through Facebook after being asked to comment: “What I will say is they are taking advantage of the moment. I can’t say who lead what. What I can say is I didn’t lead a damn thing and what happened should NOT have…. Yes, they got into a scuffle with some protestors. From what witnesses say, Mensah grabbed at one of the protestors weapons on a sling and the gun fired.” You can read Mayes’ full comment later in this article.

After reaching out to Mensah for comment, he wrote Heavy through Facebook: “There is a difference between a peaceful protest, and a plan to trespass on private property with the intent to damage it. My girlfriend and I had every right to defend the property from those that trespassed on it. At the end of the day, protesters chose to come to that house, no one forced them to. They chose to stay, they chose to damage property, they chose to assault us. Their decision to come onto the porch, continue their assault on unarmed and defenseless police officers, and ultimately try kill me was their decision, and their decision alone. The incident is currently under investigation and the evidence will speak for itself.”

The morning after the incident, a Wauwatosa police car was sitting near the home. Remnants of toilet paper and silly string and crime scene tape were visible in the yard, and a window appeared smashed. —Heavy

Here’s the part that Jayzee conveniently left out, in his zeal to destroy a man with much less power, wealth, and influence than the rapper has:

In an interview with WISN radio, Officer Joseph Mensah said the number of shootings he’s been involved in is not an anomaly.

“If you were to look at my department and other departments as well, there are several officers that have fired way more than those rounds. I’m not trying to deflect onto them, but the issue is, even with my own department, we have over half a dozen officers within these past five years that have gotten in several critical incidents and shootings. The common denominator in every single one of them, is that a suspect is armed,” Mensah said. — WISN