When word spread that Leftist causes were A-OK but politically conservative ones were not, reactions were fierce. Here’s what happened.

Word spread on social media that Goodyear had specific guidance on what is and is not acceptable political speech at work.

So long as you’re flying your rainbow flag or sporting some kind of BLM gear, you’re golden.

There are three parts to this story.

The claim, the reaction, and the company response.

…a local news station in Kansas shared a slide of a presentation captured by an employee at a plant in Topeka. The slide, reportedly taken from a diversity training session, showed a list of acceptable and unacceptable phrases under Goodyear’s “zero-tolerance policy.”

Trump said it was “up to people” if they want to boycott Goodyear over the reported policy.

“It’s a terrible thing,” Trump said. “They’re using their power over these people. These people want to wear whatever it is that we’re talking about. I would be very much in favor if people don’t want to buy there…I think it’s disgraceful that they did this.”

Here’s the slide that triggered the controversy. 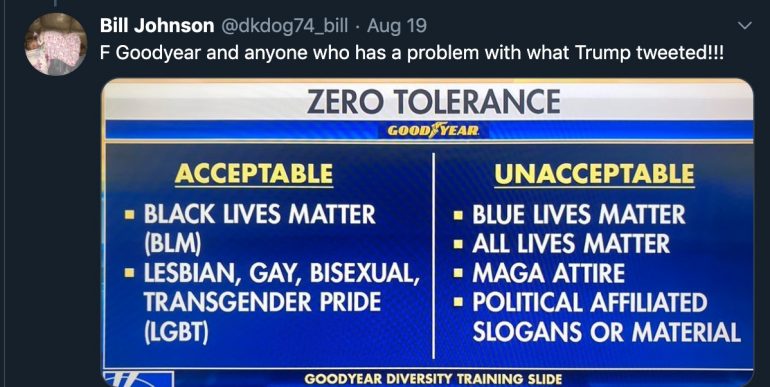 Conservatives naturally were pretty pissed off that a political front group founded as a Trojan Horse by three ‘Trained Marxists’ gets a special endorsement (as they bow the obligatory knee to the Rainbow Gestapo), but anyone who dares to step out of line and show support such traditional things as the police or America needs to be shunned as though they were some kind of a political bomb-thrower.

Don’t buy GOODYEAR TIRES – They announced a BAN ON MAGA HATS. Get better tires for far less! (This is what the Radical Left Democrats do. Two can play the same game, and we have to start playing it now!).

Goodyear had something to say to defend themselves. You can decide for yourself what to make of it.

Yesterday, Goodyear became the focus of a conversation that created some misconceptions about our policies and our company. Goodyear has always wholeheartedly supported both equality and law enforcement and will continue to do so. pic.twitter.com/oO6jUg2rTR

Here’s a larger view of the same text: 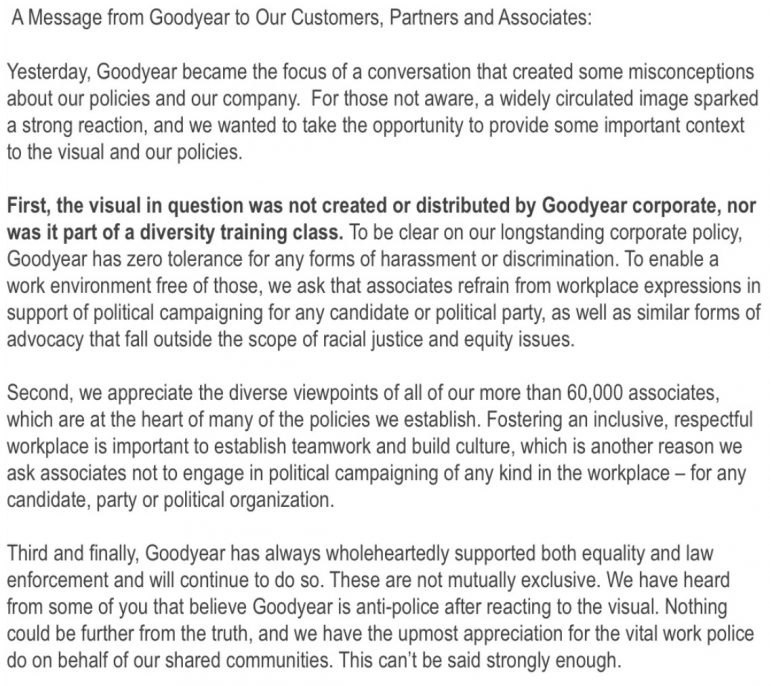 The key takeaways they would want us to know are:

Do you buy that answer?