Where are all of those ‘this is what Democracy looks like’ chants now, huh?

If you think getting out past the border gets you past the craziness, you’d be wrong. Trump has become a favorite news topic around the world. As you would probably expect, the media hates him.

And a gullible public has been taught to hate him as well.

Not to ‘dislike’ him, ‘disagree with him’, or ‘reject his political vision’. No. they have been taught to hate HIM.

For example, the NHL playoffs were delayed because of the Wuhan Chinavirus, but have been set up in a couple of ‘bubbles’ in Canada.

One of those ‘Bubbles’ is in Toronto, with half of the competing teams all located in one city. Unlike some of the other leagues, they haven’t gone all-in on the BLM train. They’ve made some general statements of support of racial equality, but they’ve not gone the route of, for example, the NBA or NFL.

Players can come up in support of Democrats, liberals, or their pet causes all day long and never get called out for doing so. But God help any of the ‘Tim Tebows’ of the world. It’s open season.

Logan Couture, captain of the San Jose Sharks found that out the hard way when he happened to say something that supported the ‘wrong’ political party.

Here’s a screencap of the tweet that got him in trouble. 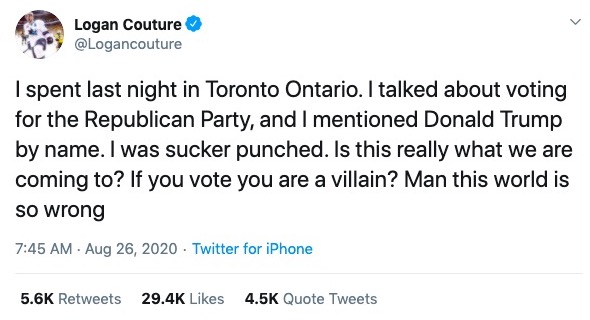 The tweets have since been deleted, but they were picked up in a story at the SFChronicle.

“Just crazy to me, if you speak your own opinion violence happens,” he posted in a subsequent tweet. “Even crazier, people are okay with it.”

In a sane world, we would be talking about the @$$hole who thought physical violence is an acceptable means of expressing political disagreement.

But we are not living in a sane world anymore, are we? We are living in an OrangeManBad world. Thoughtcrime WILL be punished in the press, and apologies will be extorted for offending the wrong people.

Here he is giving his mea culpa. 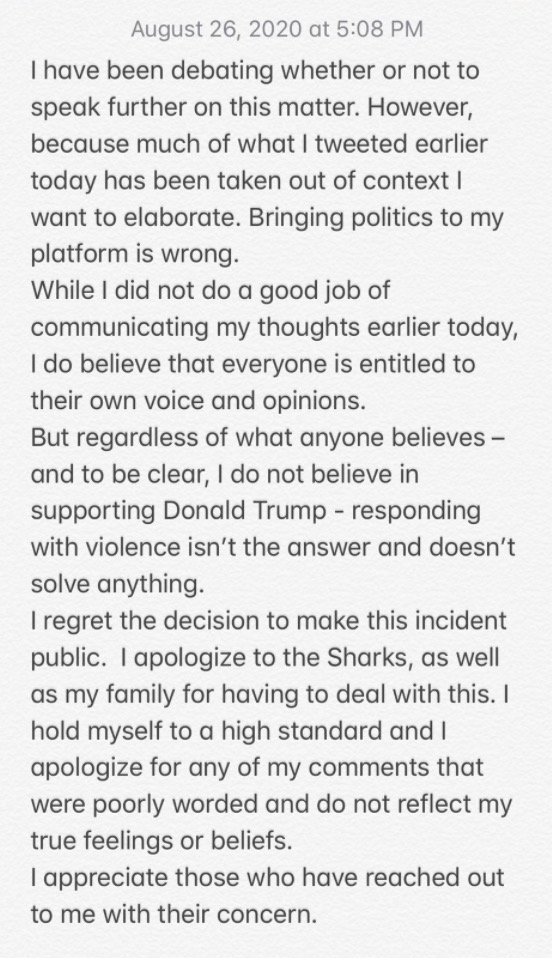 We DO notice nobody is offering any compelled apologies for all the free press being given to the political organization who is inciting violent insurrection under the bogus pretext of racial equality. For their support of Marxism and their desire to abolish the nuclear family.

This player — a Canadian who can’t even CAST a vote for either party, who was horrified by the violence and contempt being poured out upon law enforcement by the left, since he himself has relatives in law enforcement — had his own reasons for preferring the platform that did NOT want to turn the whole country into copies of Baltimore, whose inadequate policing is part in parcel with their decaying city and insane crime rate.

But the same guy who had been punched in the face for likeing the wrong party was bullied twice. The second time, it was by the mobs and the cancel culture — and his own gutless employers — into publicly stating he is NOT supporting OrangeManBad.

Pelosi, AOC and their Leftist DNC flunkies have been finger-wagging for years now about the ‘extreme right’ being ‘domestic terrorists’ and far outnumbering any danger that we might point to from either leftist extremists (like the one who damn near murdered Scalise at a ballpark) or religious zealots mistakingly believing that God will give them an upgrade to first class if they drag a bunch of innocents with them to the hereafter.

But with the death toll climbing enough that even Don LeMON (as Tucker would say it) has begun wringing his hands about the public opinion and political implications of these riots (but not the moral implications) we are seeing just exactly how ‘peaceful’ these Leftists really are.

Does he really think the rest of us have forgotten his station’s open support of Antifa and, once the riots themselves began, Fredo Cuomo’s ridiculously ignorant question about why protests ‘need to be peaceful’?

Hey CNN: Here’s Some Of That Senseless Political Violence You’re So Desperate To Report On

Race-Baiting CNN Invites Richard Spencer As Guest On Their Network