CNN is no longer a news organization, it has officially become a meme.

Earlier this week, the “Facts First” network was caught red-handed changing the chyron during Wolf Blitzer’s Situation Room to remove the word “violent” when discussing the rioting happening in Kenosha, Wisconsin.

Someone at CNN didn’t like the violent protests in Wisconsin being described as “violent” (observe the chyrons) pic.twitter.com/oDN5V2muUN

That’s pretty bad. The tattered remnant of CNN’s identity as a news organization is circling the drain.

At the very beginning of the George Floyd protests, MSNBC’s Ali Velshi was mocked online for standing in front of a torched building saying that although fires had been started it was “not generally speaking, unruly.”

With this segment, CNN told MSNBC, “Hold my beer.”

The reporter on the ground admits that this is just “one of multiple locations that have been burning in Kenosha, Wisconsin, over the course of the night,” but the chyron reads that the protest is “fiery but mostly peaceful.”

You cannot make this up… A CNN reporter is standing in front of a building engulfed in flames and CNN's chyron reads:

Here’s a FYI for CNN…

IT’S NOT A “PEACEFUL PROTEST” IF BUILDINGS ARE BEING SET ON FIRE.

It wasn’t long before people were openly mocking CNN on Twitter:

Here are some for a variety of ComiCon fandoms out there: 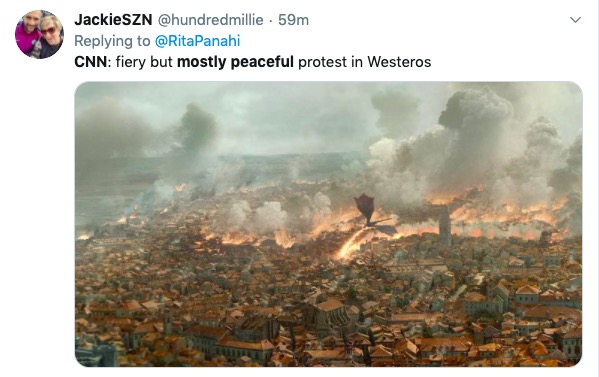 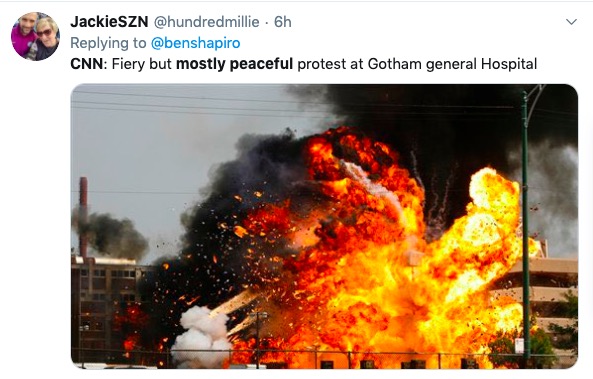 History buffs had a blast: 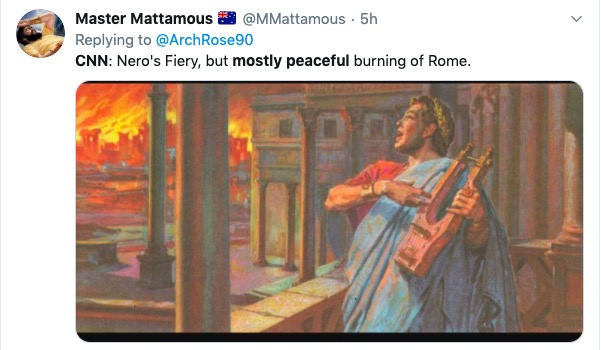 One mememaker had some fun with photoshop:

CNN is so awful that they deserve every single bit of this mockery.

They’re worse than MSNBC that is open about their bias.

The problem with CNN is that they pretend to be the “just the facts” news organization when they clearly aren’t.

Right-leaning outlets aren’t shy about their perspective and they’re vilified for it.

At the very least, CNN could be open about being a bunch of leftist presstitutes.

That way people would know that they’re watching propaganda and which way it was directed and they can balance out the coverage to get both sides, which is what responsible citizens should do.

CNN tries to maintain its veneer of impartiality while openly shilling for Democrats.

That’s why they’re so awful and President Trump has called them “Fake News.”