It’s been a while since they’ve trotted out the old “white Hispanic” line.

The last time we heard that it was in relation to the Trayvon Martin incident.

It’s so much easier to claim that there’s “systemic” racism when you make every officer involved in a shooting white by default.

Around 3 pm on Monday, two deputies from the L.A. Sheriff’s Department saw a man riding his bike on the street in South Los Angeles and attempted to stop him because he was allegedly violating a vehicle code. The man got off his bike and took off running. Deputies lost sight of the suspect, but eventually caught up to him. When they did, the suspect allegedly punched one deputy in the face and dropped the bundle of clothing he holding. In doing so, deputies noticed a semi-automatic handgun hidden in the clothing.

“Our suspect was holding some items of clothing in his hands, punched one of the officers in the face and then dropped the items in his hands,” the lieutenant said. “The deputies noticed that inside the clothing items that he dropped was a black semi-automatic handgun.”

Two officers then opened fire and the man was struck by gunfire several times, Dean said.

The man, identified only as a Black man in his 30s, was pronounced dead at the scene, according to the Los Angeles County Sheriff’s Department. Although officials did not release the man’s name, his family and the Los Angeles chapter of Black Lives Matter identified him as Dijon Kizzee.

As is the case with every time an officer discharges his firearm in apprehending a suspect, the incident is being investigated. 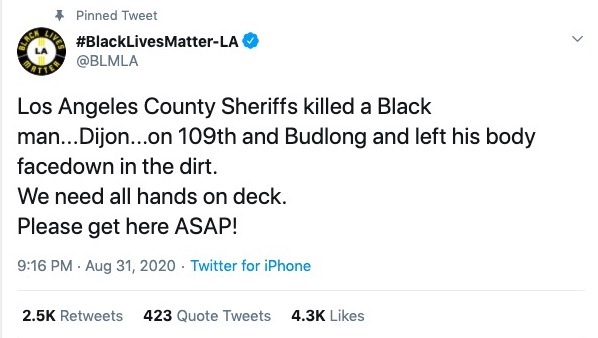 And, as expected, they demanded that “white folks, please defer to Black leadership.”

The suspect that was shot had not been made public by the Sheriff’s office, but BLM-LA identified him as Dijon Kizzee.

His name is #DijonKizzee and LA County Sheriffs stole his life.
Stand for him. Stand with the community on 109th & Budlong RIGHT NOW.
*White folks, please defer to Black leadership. #BlackLivesMatter

Video of the incident was shared widely on social media, but jumps from when Kizzee is running away from the police to after he is shot and on the ground.

The man pulled a gun on police, but it was edited out of this clip. pic.twitter.com/5a8JEITu5L

Protesters are gathered in Westmont where deputies shot and killed a Black man https://t.co/CWrERcUGoW pic.twitter.com/XlTkdwjSDk

It didn’t take long for race-baiter Tariq Nasheed to fan the flames of racism.

Allegedly, one of the officer’s who shot the armed black man today in LA is actually Hispanic

Talk about desperately attempting to incite a race war https://t.co/Rcq0VHjHgW

Citizen journalists were on the ground capturing video of the growing protest.

.@BLMLA has publicly declared tonight the shooting of the armed black man earlier today in LA a “murder” without even letting the investigation complete

Video of a car driving into a shoe store in Los Angeles was called an attempt to begin looting, but it’s unconfirmed if the incident was related or anywhere near the protest.

BLM rioters in Los Angeles are beginning to riot and loot tonight after a police-involved shooting of a black male. Here, they drive a car into a shoe store. #BlackLivesMatter pic.twitter.com/ch8RhgIuAN

Emotions are starting to pick up here. #LAProtest #LASD pic.twitter.com/z7i2BSr42A

“Respect the family” a protestor yelled moments ago. #LAProtest pic.twitter.com/GjOEOI7JOL

There are some questions left unanswered in this case:

These will be answered during an investigation, but this quick knee-jerk reaction to pick one side or the other without many of the facts doesn’t help justice. Sometimes cops make mistakes that are deadly and they should be held accountable for them. Also, vilifying law enforcement officers as racist to inflame racial tensions and fit some narrative is just disgusting and doesn’t help anyone.

We don’t know the motivation here, other than the scant facts that have been released. Remember, just because someone is unarmed, that doesn’t mean that they’re not a threat.

Unfortunately, LASD doesn’t require their officers to wear body cameras yet, so video from the perspective of the deputies does not exist.

The problem here is that social media has made it possible to gather large crowds very quickly with very few facts to push a narrative that police murdered a man because of his race. And you’ve seen how the people in the crowd react to law enforcement.

This is a tinderbox and it could all go up in flames.

We need to have some cooler heads and hold off on rushing to judgment.