Ted Wheeler and his incompetence are running his city into the ground. And he has the audacity to lay the blame for it at the feet of someone whose help he’s been refusing for months.

Portland has a violence problem and it has been going on for years.

‘Leadership’ for the city has been turning a blind eye to extremists in its midst under the cover of calling them ‘protesters’.

News flash, Mayor — if you’re cheering a cold-blooded murder, calling for more like it and demanding a ‘revolution’ in which you will ‘burn it down’ you don’t get to wrap yourself in the First Amendment and call yourselves protesters.

MLK was a protester. John Lewis was a protester. Many heroes of civil rights and other contentious issues in our history were protesters. This rogue’s gallery can make no claim to such a lofty title. They are violent punks, cowards, and losers hiding behind a complicit legal system that has been long cowed by violence, political correctness, and media malfeasance.

Antifa staged riots again and again since becoming a household name in 2017. Many of those riots were in Portland. But there never seems to be a very serious crackdown on them, despite their history of violence and intimidation. And so, they’ve become bolder… especially now that their DA isn’t pressing charges for much of their riotous behavior. District Attorney Drops Charges On HUNDREDS Of ‘Peaceful’ Portland Protesters

It’s a basic principle — Behavior that is rewarded is repeated.

But everything is Trump’s fault, you see. Just ask Mayor Wheeler, he’ll tell you.

Here’s an excerpt from a press conference he held after the cold-blooded murder this weekend. Notice how he begins by blaming the Trump-supporting group who — so far as we know — drove through town with nothing more dangerous than the flags of causes they supported:

Last we checked, these were all lawful activities protected by the first amendment. And for doing that, one man was shot dead in cold blood.

With whom does the Mayor sympathize in this scenario? Judging by his condemnation of the lawful demonstration, his loyalties lie with Antifa.

Notice how he sets up his description of the events.

Notice he’s NOT saying this was the fault of the guy holding the gun, nor are we to blame the felons who have injured some 300 or so police officers — in PORTLAND ALONE! — in this ‘mostly peaceful’ rioting, nor are we to find fault with any of the complicit agitator groups who are quietly funding these anarchists so that they can have the functional training, the tools, and the firepower to wage a low-level guerrila war against the very people charged with keeping the peace in our cities.

Yesterday’s events began with hundreds of cars filled with supporters of the president, rallying in Clackamas County and then driving through downtown Portland. They were supported and energized by the president himself. President Trump, for four years, we’ve had to live with you and your racist attacks on black people. We learned early about your sexist attitudes towards women. We’ve had to endure clips of you mocking a disabled man. We’ve had to listen to your antidemocratic attacks on journalists. We’ve read your tweets slamming private citizens to the point of receiving death threats, and we’ve listened to your attacks on immigrants. We’ve listened to you label Mexicans, “rapists.” We’ve heard you say that John McCain wasn’t a hero, because he was a prisoner of war. And now, you’re attacking Democratic mayors in the very institutions of democracy that have served his nation well since its founding. Do you seriously wonder, Mr. President, why this is the first time in decades that America has seen this level of violence? It’s you who have created the hate and the division. It’s you who have not found a way to say the names of black people killed by police officers, even as people in law enforcement have. And it’s you who claim that white supremacists are good people. Your campaign of fear is as antidemocratic as anything you’ve done to create hate and vitriol in our beautiful country. You’ve tried to divide us more than any other figure in modern history. And now you want me to stop the violence that you helped create. What America needs is for you to be stopped so that we can come back together as one America…

After Wheeler spoke, the Portland Police Bureau indicated that no details about the killing would be forthcoming. — Breitbart

Here’s Wheeler piling further blame on the police after they have had their funding slashed: 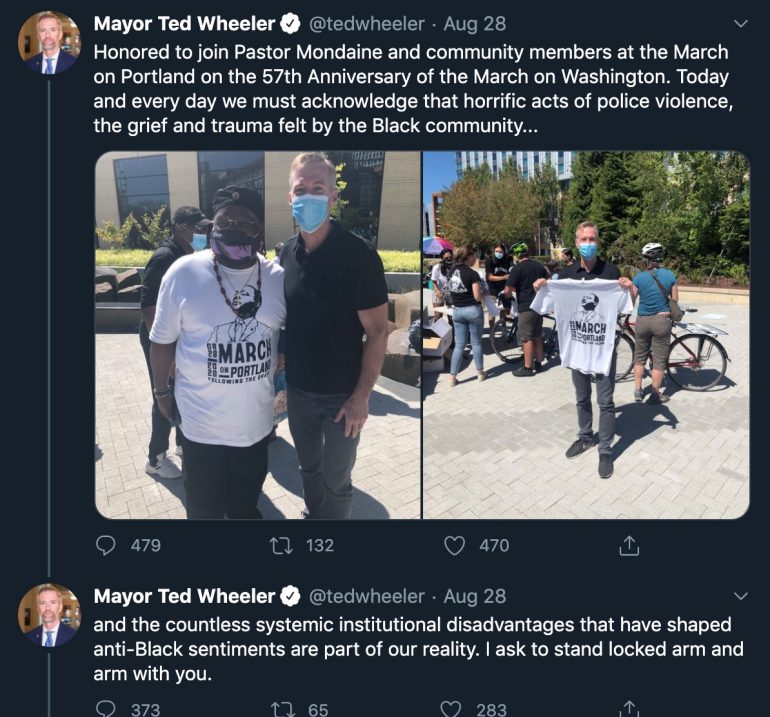 Here’s Wheeler openly boasting about rejecting any help from Trump in putting down these violent offenders… just a day or two before Antifa murdered ‘Jay’ in cold blood.

Today, I sent this letter via email to @realDonaldTrump declining his recurring offer to aid Portland by sending federal enforcement to the city. https://t.co/W85EDfriyk pic.twitter.com/CC1IWTp5k8

Everything always is, these days, isn’t it?

How convenient for the Left.