The media can focus on the narrative surrounding a single death for months or even years (if it advances a preferred cause) facts be damned. That same media has been habitually silent on the dizzying rate that civilians are being murdered by criminals in Chicago.

Any time the Right raises that issue, the response is some version of ‘don’t change the subject’.

Ok. We get it. Some deaths are politically expedient to you. But lives that can’t be leveraged are unimportant… in your eyes, anyway.

But after years of escalating anti-cop rhetoric in society and the media, cops aren’t just being targeted by unruly crowds to be injured. Now their lives are being explicitly singled out for murder.

The FBI has warned Chicago police about a plot by street gangs to shoot any cop on-sight with their weapon drawn and film it.

The federal intelligence alert from FBI officials was sent to Chicago area law enforcement on August 26, warning that 36 notorious gangs have made a pact to gun down cops ‘in order to garner national media attention’, reported ABC 7.

The threat comes as two cops were gunned down in the street while carrying out a traffic stop Sunday during yet another bloody weekend in the Windy City that left 10 dead and 44 injured in shootings.

Chicago has been rocked by a dramatic spike in violent crime in recent months, with a staggering 505 people murdered so far this year.

…The ‘situational information report’ sent by the FBI Wednesday states that: ‘members of these gang factions have been actively searching for, and filming, police officers in performance of their official duties.

‘The purpose of which is to catch on film an officer drawing his/her weapon on any subject and the subsequent “shoot on-sight” of said officer, in order to garner national media attention.’ 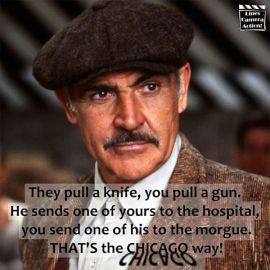 This is happening in Obama’s supposed hometown of Chicago. His buddy — and former Mayor — Rahm Emanuel’s city. Mayor Lightfoot’s city.

It is also the city of the domestic terrorist from whose living room Obama first launched his Presidential bid… Bill Ayers. He was co-founder of the Weather Underground. A communist group which had as its goal the overthrowing of our government.

Any similarities between him and the self-described ‘trained Marxist’ founders of BLM who name a cop killer as their hero are *purely* coincidental… right?