Someone’s got some explaining to do. Weissman, the Mueller investigator who was personally present during Hillary’s ‘victory’ party on election night is among the people named.

Data from more than 25 government-issued phones used by members of the special counsel’s team was wiped or deleted during the course of the Trump-Russia probe, according to Justice Department records released on Thursday. —DailyCaller

What happened to these phones bears a suspicious similarity to what happened to all those other records, phones, and servers that Hillary was supposed to provide under subpoena.

Whoops. So sad. Nothing I can do, really.

In any other circumstance, such behavior, on this scale, would demonstrate ill intent.

And these are the slobs in whose hands we entrusted the criminal investigation — and resultant political hamstringing — of a duly-elected president.

(Are you proud of yourself for throwing in with these crooks, Jeff Flake?)

We begin with the details…

Newly released DOJ records show that multiple top members of Mueller's investigative team claimed to have "accidentally wiped" at least 15 (!) phones used during the anti-Trump investigation after the DOJ OIG asked for the devies to be handed over. https://t.co/VVUnfZVolm pic.twitter.com/p50PnoCBse

Just when you think the most blatant corruption has been exposed in one area, along comes some more egregious examples.

Trump’s tagline of ‘Mueller’s Angry Democrats’ running that witchhunt doesn’t seem so far-fetched anymore, does it? 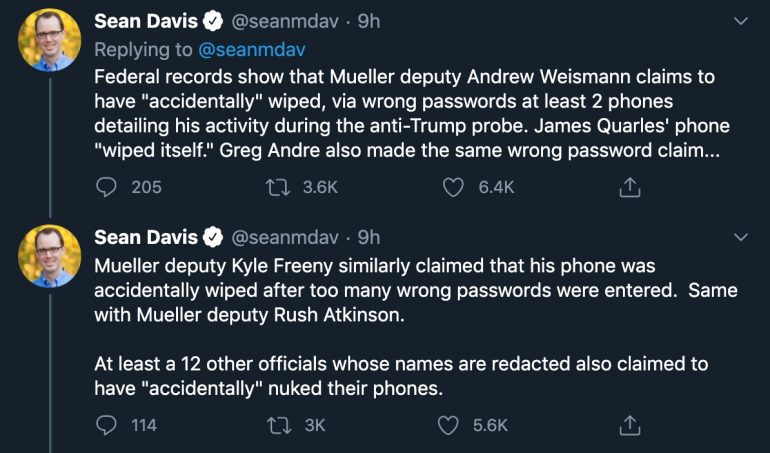 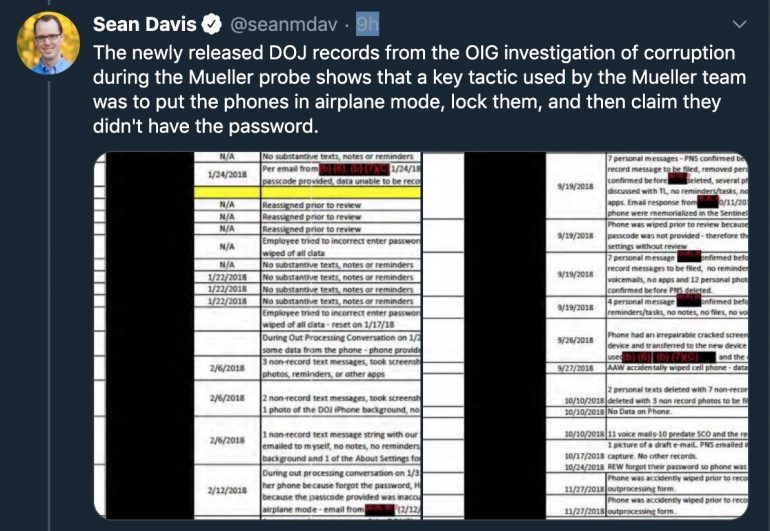 Here’s some relevant information to keep in mind…

On June 2, the former Trump investigator is scheduled to host a virtual fundraising event for former Vice President Joe Biden, sure to be replete with the candidate’s signature gaffes and the campaign’s technical glitches. The event, a “virtual fireside chat,” will be headlined by Weissmann and moderated by former New Jersey Attorney General Anne Milgram, according to the Biden campaign.

Andrew Weissmann helped fill the Mueller team with anti-Trump investigators, many of whom contributed to the Hillary Clinton campaign. Weissmann himself even attended what was supposed to be Hillary Clinton’s “victory” party on election night in 2016, as reported by Business Insider. Weissmann also sent former acting Attorney General Sally Yates an email praising Yates for her insubordination in refusing to defend the Trump administration’s travel ban on terrorism-producing countries. — TownHall

And present some of the reactions… — TownHall

He (and his team) were not the ‘righteous’ ones they wanted us to believe they were. If anything, they are just as tainted as the coup participants themselves and the innuendo around their investigation may have successfully stolen the 2018 election for Nancy and the Democrats.